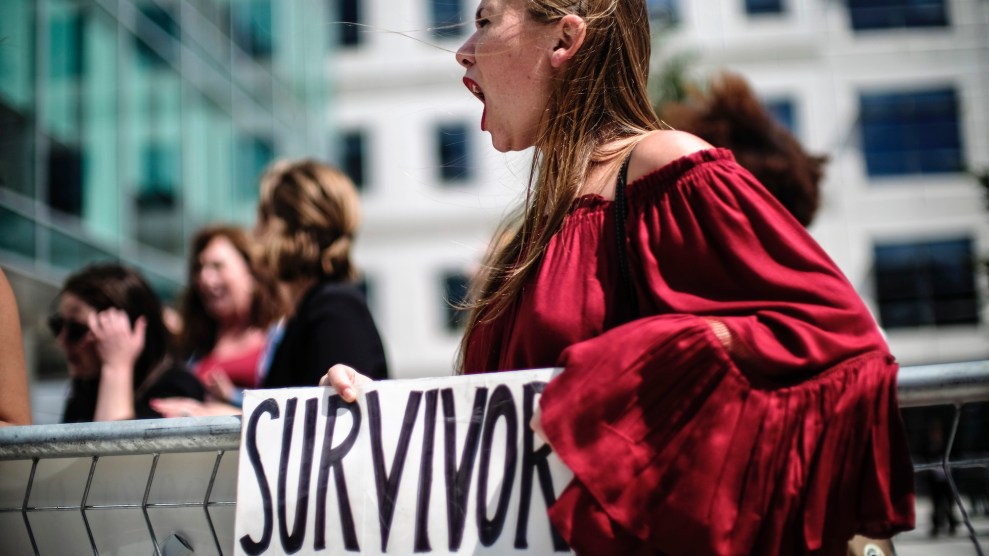 A new survey of campus sexual violence in the United States has found that more than 1 in 4 undergraduate women from 33 large universities have experienced sexual assault while they were students. Fewer than 30 percent of those women, who were assaulted by force or while they were unable to consent, filed a report or sought help or counseling from their schools—typically because they believed they could handle it alone, were too embarrassed or ashamed, or felt that what they had experienced was not serious enough to merit assistance.

The survey of more than 181,000 students, conducted last spring and published this week by the Association of American Universities, is the largest of its kind. It is the second iteration of another large study published in 2015, which included data from many of the same institutions and had broadly similar results. “The disturbing news from this year’s survey is that sexual assault and misconduct remain far too prevalent among students at all levels of study,” AAU president Mary Sue Coleman wrote in a letter accompanying the results.

Over the last four years, sexual assault rates on the 21 campuses that participated in both surveys rose by a couple of percentage points on average for undergraduate women and men (about seven percent of whom reported nonconsensual sexual contact by force or while they were unable to consent). The rate for transgender, genderqueer, and nonbinary students stayed steady at around 23 percent, not a statistically significant change from 2015.

According to David Cantor, a senior statistical fellow at the research firm Westat and lead author of the report, it’s unclear whether the small increase reflects a rising rate of sexual assault, or whether it’s the result of other factors. “MeToo may have led to a somewhat different mix of students responding to the survey,” Cantor explains. But even as student awareness of sexual assault has grown, Cantor says there is no evidence that the survey was influenced by more students recognizing incidents of sexual assault as such.

Many of the schools that participated in the survey have been at the center of recent controversies over sexual misconduct, including alleged sexual harassment of graduate students by faculty members at the University of Rochester and a high-profile rape trial at Yale University. At the University of Virginia, the subject of a 2014 retracted Rolling Stone article about a later-discredited report of gang rape at a fraternity house, 13 percent of undergraduate women reported experiencing penetrative sexual assault by force, threats, or while they were unable to consent or stop what was happening—the same rate as in 2015.

At Stanford University, which has been roiled by sexual misconduct as well as the administration’s handling of Brock Turner’s sexual assault of Chanel Miller in 2015, just 29 percent of undergraduate women believed that if they reported a sexual assault to the school, administrators would conduct a fair investigation. Stanford Provost Persis Drell called the result a “distressing finding” in a letter to the campus. “Despite many efforts at Stanford over the years, it is evident that much more needs to be done.”

Some of the highest rates of sexual assault were reported at the University of Southern California, where a Los Angeles Times investigation last year revealed hundreds of sexual assault accusations against George Tyndall, a former gynecologist in the university’s student health clinic. According to the new survey, about 37 percent of undergraduate women at USC reported some type of nonconsensual sexual contact since enrolling, and 31 percent said they experienced sexual assault by force or while they were unable to consent.

The aggregate survey report published by the Association of American Universities emphasizes that the results likely don’t apply to all American college students. The participating universities were not randomly selected, and researchers found wide variability among campuses—including for reported rates of sexual assault among undergraduate women that ranged from 14 to 32 percent.

“This is a very specific group of universities,” says Morgan Dewey, communications director for End Rape on Campus, an advocacy group for campus sexual assault survivors. “They are elite schools. What this does not include is what’s happening at trade schools, at tech schools, what’s happening at high schools.” She notes that there is no data on historically black colleges and universities, as well as schools that serve large populations of Latinx, Asian American, and Native students.

The study’s authors defend their findings against the familiar criticism that such surveys do not accurately portray student experiences due to a phenomenon known as non-response bias. According to this theory, since only a fraction of students decide to take these non-mandatory surveys, the group that opts in may disproportionally include those who have experienced sexual assault. Cantor, who has has analyzed both the 2015 and 2019 survey results for non-response bias, says that the data for undergraduate women may be skewed—but only by 2 or 3 percentage points at most. And even if the numbers were adjusted downward, he points out, “the data are still many times higher than what is suggested by official reports of sexual misconduct.”

In their final report, the authors emphasize how common the experience of sexual assault is among young adults, on campus and off—even as they urge against alarmism. “Of the few studies that have been conducted, the conclusion is that college students have lower [sexual assault] rates than those not in college,” they wrote. “The prevalence rates discussed in this report should not be interpreted as an indication that attending a 4-year school is extraordinarily dangerous.” In other words, danger is the norm.