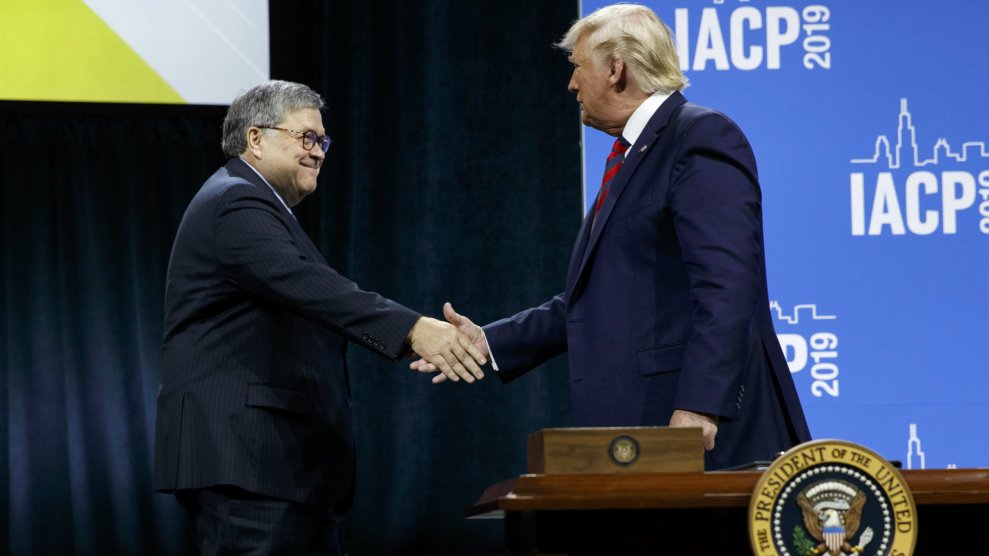 “Criminals who murder our police should get the death penalty,” Donald Trump said to loud cheers at the International Association of Chiefs of Police conference on Monday. The president loves the death penalty. He’s called for it for those convicted of terrorism, mass shooters, and even drug dealers. So, it came as no surprise when Attorney General William Barr announced in July that the federal government would resume executions after a 16-year hiatus.

But not all conservatives are cheering.

“The death penalty is a failed big-government program,” Hannah Cox, the national director of the Conservatives Concerned About the Death Penalty said at a press conference on Monday, which happened to coincide with the President’s speech. “The administration is out of step with where the country is going on criminal justice reform.”

Support for the death penalty across the political spectrum has declined since its peak popularity in the 1990s, but support among Republicans remains high. A 2018 Pew Research survey found that 77 percent of Republicans support capital punishment. By contrast, 52 percent of Independents support the practice while 35 percent of Democrats do. But at their press conference, the Conservatives Concerned About the Death Penalty announced that they had received more than 250 signatures from Republicans, conservatives, and Libertarians who are opposed to capital punishment in hopes that they could convince more conservatives to abandon the death penalty. Republicans remain criminal justice hardliners even after the Democratic party slowly began embracing progressive reforms, but conservatives opposed to the death penalty justify their approach with classically conservative arguments: They see it as an expensive government program rooted in arbitrariness and prone to big-government mistakes. All of which doesn’t align with what their ideology claims to value.

When the Department of Justice announced the resumption of executions, Barr said in the press release, “We owe it to the victims and their families to carry forward the sentence imposed by our justice system.” But Earlene Peterson, a Trump voter from Arkansas, doesn’t want what the government thinks it owes her. She created a six-minute video asking Trump to spare the life of Daniel Lee, who is scheduled to be put to death on December 9 for the murder of Peterson’s daughter Nancy Mueller, her son-in-law William, and their eight-year-old daughter. She voted for Trump in 2016 and will do so again in 2020. “I can’t see how executing Daniel Lee will honor my daughter in any way,” she said. “I hope and pray President Trump will give him clemency. That would help me and my family more than anything.”

“I can’t see how executing Daniel Lee will honor my daughter in any way. I hope and pray President Trump will give him clemency.”

In 1996, Daniel Lee broke into the Russellville, Arkansas, home of the Muellers. William Mueller was a gun dealer, and Lee and his accomplice Chevie Kehoe, were looking for firearms and money. In the course of the robbery, they murdered the family and deposited their remains in a bayou. They were charged with murder in the aid of racketeering, which made it a federal offense. Though both defendants were charged with three counts of murder, Kehoe was the one who murdered the child after Lee said he did not kill children. Kehoe, who was clean-cut and well-dressed during the trial in 1999, was sentenced to life in prison. The prosecution team initially decided not to pursue the death penalty against Lee, but Department of Justice officials overruled the lawyers. They argued that Lee would be dangerous unless he was put to death. His will be the first of five federal death sentences that will be carried out in December and January.

Despite the argument that one important justification for the death penalty is, as Barr noted, someone compensating victims for their losses, Peterson has been public in her opposition. “The government ain’t doing this for me,” she said in the video. After showing pictures of Nancy and her granddaughter to the camera, Peterson sits outside of her home and recounts the story of the crime that robbed her of a daughter, son-in-law, and grandchild. “I believe you have to pay for what you do,” she said. “But that doesn’t mean death.”

Some of Peterson’s family members, like her daughter Kimma Gurel and her granddaughter Monica Veillette agree. Scott Mueller, William Mueller’s son, says it doesn’t matter to him.

Liberals and progressives often argue conservatives shouldn’t be allowed to call themselves pro-life if they are anti-abortion but support the death penalty. Recently some conservatives have begun to acknowledge what they see as that fundamental contradiction. “I am pro-life from conception until natural death,” Ohio state Rep. Niraj Antani, said on the CCADP press call. Darcy Van Orden, founder and executive director of the Utah Justice Coalition, a criminal justice reform organization, echoed Antani’s sentiments. “I’m a pro-life person,” she explained. “I don’t want government to play God.”

Some other conservatives point to the fact that the death penalty is costly—even in states where it’s rarely used. “Utah spent $40 million dollars in the last 20 years, just to add two people to death row,” Van Orden explained during the press conference. The last person executed in Utah was Ronnie Gardner in 2010. There are currently 8 people awaiting death in the state. In Wyoming, the financial picture is even starker. Although no one has been executed in the state since 1992, and no one has been on death row since 2014, it still costs the state $1 million each year to fund death penalty trials.

For supporters of limited government, it seems obvious that conservatives wouldn’t want the government meddling in such existential questions. “The small government aspect is a driving force for me,” Wyoming state Rep. Jared Olsen said on the press call. “It blows my mind that anyone would want to trust the Justice Department with matters of life and death.” Distrust of the government’s ability to kill inmates is well-deserved. According to a 2014 report by the National Academy of Sciences, one in 25 people currently on death row are innocent. For many conservatives, there is no better example of why the government should no longer be involved than botched execution than the case of Clayton Lockett, the Oklahoma inmate who in 2014 writhed and moaned in pain while prison staffers spent close to an hour trying to inject him with a lethal dosage of drugs. “We don’t trust government to run our healthcare,” Rep. Antani said, “why would we trust government to put us to death?”