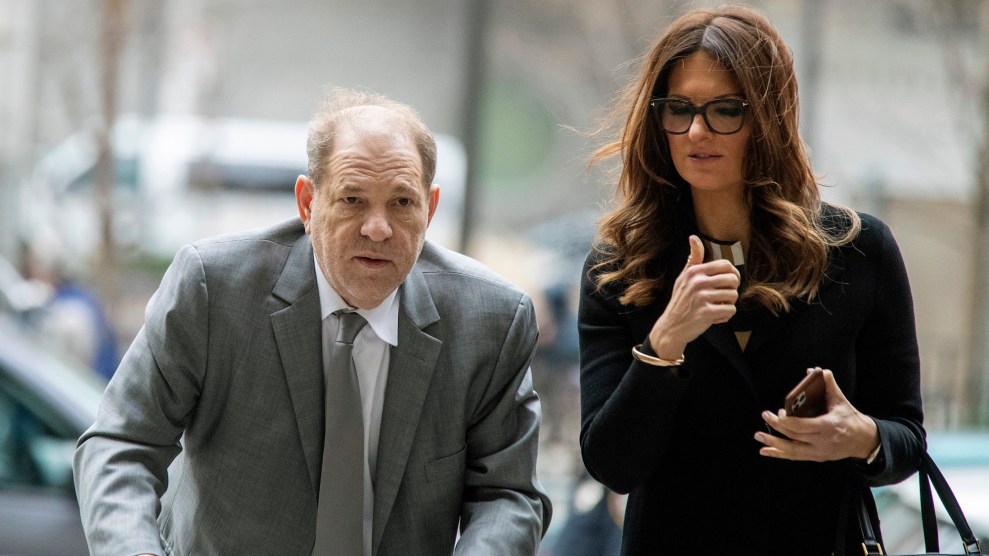 On Tuesday, the first day of jury selection in Harvey Weinstein’s rape trial in a lower Manhattan courtroom, Judge James Burke asked a group of 120 potential jurors if they felt that they could not remain impartial. A third raised their hands. “We’ll ask you to…leave the courtroom,” the judge told them. By the end of the day, just 36 were left.

Two thousand people were summoned for jury duty in the lead-up to the most anticipated rape prosecution since reports of Weinstein’s alleged abuse of women in the entertainment industry jumpstarted the global MeToo movement in October 2017. Every day this week, the court is calling in groups of 120 potential jurors at a time. They are introduced to the former movie producer, read a list of names that could come up in the case—including Salma Hayek, Charlize Theron, and Rosie Perez—and asked whether they can serve for what could be at least a six-week trial. Over the next two weeks, state prosecutors and Weinstein’s six-person defense team will attempt to whittle down the oversized jury pool to a panel of 12 jurors and 6 alternates.

Weinstein, who has been accused of assault or harassment by at least 100 women, is charged with predatory sexual assault, which carries a maximum sentence of life in prison. He also faces additional sexual assault charges based on accusations that he raped a woman in a Manhattan hotel room in 2013 and forcibly performed oral sex on another woman in 2006.

This trial will be unique in many respects: the A-list witness lineup, the intense media focus, the disgraced producer’s stand-in role for all powerful, predatory men. According to attorneys who try sexual assault cases, selecting a jury to determine Weinstein’s guilt will be especially challenging, not just because of the case’s high profile, but the difficulty of finding a dozen people who can weigh evidence of sexual violence without bringing in their personal biases and experiences.

For Stefano, the “juror from hell” for Weinstein’s legal team would be any young, educated woman who reads.

One of the biggest concerns for both prosecutors and defense attorneys is the potential presence of sexual assault survivors and perpetrators in the jury pool, according to Jennifer Becker, a former New York City sex crimes prosecutor. An estimated 1 in 5 women and 1 in 71 men are raped in their lifetimes, so the odds are high that the Weinstein jury pool includes many people who have experienced sexual assault—as well as those who have committed it. On Wednesday, one potential juror identified herself as an assault survivor and was dismissed after she said felt she couldn’t be fair. Another woman reportedly told the court she has a “very close friend who had an encounter with the defendant.”

For survivors of sexual assault, the jury selection experience could be painful. “Even that jury summons, or walking into a courtroom and hearing, ‘Thanks for appearing for jury duty, this is a case about sexual assault’—that in itself could be triggering,” says Becker, now the deputy legal director of the women’s rights group Legal Momentum. And both sides’ lawyers will want to know whether any jurors have experienced sexual assault.

It can be tricky for lawyers to determine if a potential juror is a survivor without coming off badly. “You do have to be delicate with how you bring it up,” says Elena Fast, a criminal defense lawyer who has worked on sexual assault cases in Manhattan. “Even if the juror expresses their concerns about their experience being a previous victim of a crime, you do have to think about how is the rest of the jury box perceiving you when you’re asking these questions.”

This questioning, known as voir dire, is necessary to figure out whether a juror can be impartial. While being a survivor doesn’t necessarily disqualify someone from serving on a jury, it might affect their ability to hear and process the evidence presented at trial, Becker says. She tells the story of a woman in her eighties who disclosed childhood sexual abuse during juror screening—the first time she had told anyone about it. Karen Stefano, who recently published a book about becoming a criminal defense attorney after experiencing sexual assault, recalls a potential juror who burst into tears when she was simply asked if she had been the victim of a crime. “We just kind of let her slip out the back door,” Stefano remembers.

To prevent these kinds of situations, Becker recommends that attorneys use detailed questionnaires like the one being used in Weinstein’s jury selection process. The 36 people who made the cut after the first day’s screening were told to complete 72 written questions and report back for more questioning next week. “Have you, a family member or a close friend ever been the victim of physical or sexual abuse, either as a child or adult?” the questionnaire asks. Those kinds of questions give prospective jurors a chance to privately disclose their experiences, which they may discuss further in private with the attorneys and judge. According to attorneys, people who identify as survivors are typically struck from the jury pool and sent home quietly.

The same goes for people who have been accused of sexual assault or harassment. “Have you, a family member, or a close friend, ever been charged with, accused of, or arrested for a crime?” the Weinstein questionnaire asks potential jurors. Attorneys sometimes ask specifically about sexual misconduct. But because so few sexual assaults are ever charged, much less reported or investigated, these kinds of questions aren’t very effective, Becker says. “Maybe there was an allegation,” she says. “Maybe they were questioned, and there were no charges. And they say ‘no,’ right? Because they think, ‘Well, I was never arrested, or I was never convicted.'”

For Stefano, the “juror from hell” for Weinstein’s legal team would be any young, educated woman who reads. And their fantasy juror would be “a white male,” she says. “Someone with money. It would be a man who feels a little bit beaten down by the hashtag-MeToo movement.” Ideally, she says, he’d be a former sexual harasser, someone who is ready to believe the defense’s argument that a victim “asked for it.”

“Even that jury summons, or walking into a courtroom…that in itself could be triggering.”

Prosecutors, of course, are looking for the opposite kind of juror. To Becker, a fair juror is one who doesn’t subscribe to “deeply rooted myths about rape,” like the false belief that real victims wouldn’t wait years to report a sexual assault, or that they should cry—but not too much—when they testify. Depending on the facts of a particular case, Becker might suss out prospective jurors by asking if they believe that marriage constitutes irrevocable consent to sex. She’s found such questions—and how potential jurors react to them—more useful than judging people by gender or age.

Fast says she typically avoids young people for sexual assault juries. But she thinks the Weinstein defense team might actually want younger jurors, because it is expected to present evidence that his 2006 accuser continued to send him texts after her alleged sexual assault. “Younger people who have grown up with a cell phone would better perceive that this may not be what you do if you were really a victim of a crime,” Fast says. She realizes that this argument is also a rape myth (there are many reasons why a survivor might stay in contact with her abuser). But as a defense attorney, she says, this approach is fair game: “You try to bolster your position based on whatever you have.”‘

The Weinstein trial, already tumultuous, is expected to get even uglier. His lead attorney, Donna Rotunno—whom Chicago magazine dubbed “the anti-Gloria Allred”—has a reputation for harshly cross-examining alleged sexual assault victims. She has already previewed some of her team’s plan to attack the credibility of Weinstein’s accusers. “I think a woman who is a victim of rape is going to look at [the accuser’s behavior] and say, ‘That’s not what rape victims do,'” she told Vanity Fair. “In this case, I almost think somebody who is a real victim of rape might not be a bad juror.”