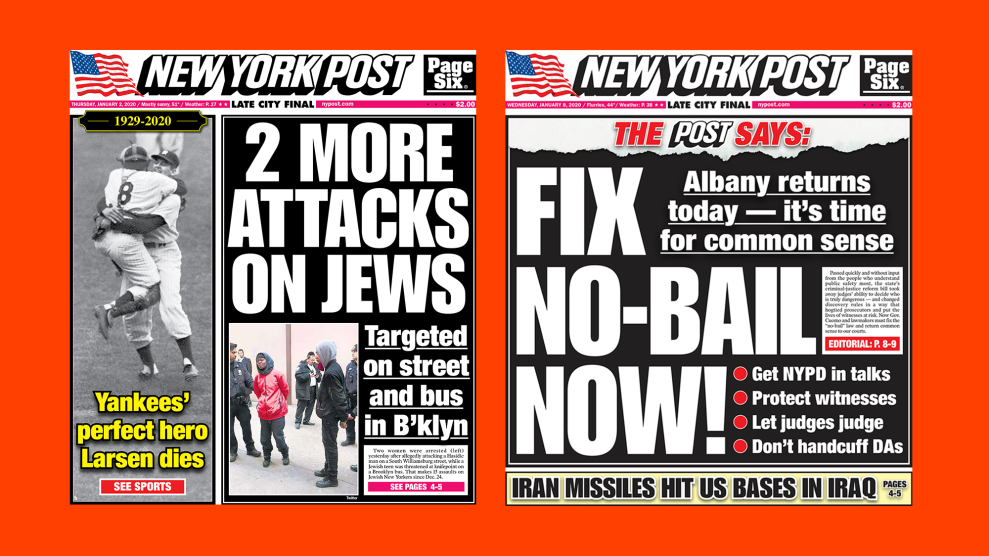 At the start of the year, New York enacted a set of reforms designed to ensure that fewer people land in jail before trial simply because they don’t have enough money to pay the court bail. Critics immediately pounced. New York City Mayor Bill de Blasio and state lawmakers are already trying to roll back the reforms. Fueling the backlash is police rhetoric and pernicious tabloid coverage intent on convincing people that the reforms will unleash dangerous criminals onto the streets.

Criminal justice advocates had pushed for the bail reform for years, inspired partly by Kalief Browder, a Bronx teenager who committed suicide after spending three years in jail—for allegedly stealing a backpack—because he couldn’t afford the $3,000 he needed for bail. (The charges against him were later dismissed). Under New York’s new setup, defendants must now be released without cash bail if they’re charged with misdemeanors or most nonviolent felonies. (California and New Jersey also recently eliminated or restricted cash bail.)

“We are seeing elected officials turn back because of fear-mongering.”

But to many police officers and lawmakers, the bail reforms are a menace. “Happy New Year everyone,” the Colonie police department wrote in a statement, “Especially happy for our most recent bank robber,” a man who was released on his own recognizance because of the new law. The New York Post warned that another man accused of drunk driving had been freed and now threatened the well-being of pedestrians. “They’re f–king letting everybody go,” an anonymous New York Police Department source told the Post. “Democrats have abandoned crime victims, law enforcement, and the public in favor of criminals,” said Senate Republican Leader John Flanagan. For people like Akeem Browder, Kalief’s brother, all this pushback is a frustrating retreat. “We are seeing elected officials turn back because of fear-mongering,” he told the New York Times.

Even some of New York’s top leaders are rethinking things. Speaking with reporters, Mayor de Blasio pointed to a recent spate of anti-Semitic attacks as rationale for reconsidering the bail reforms. Before the law took effect, a woman was arrested for allegedly assaulting three Orthodox Jews in Brooklyn, and then released on her own recognizance, only to be rearrested for punching someone. Her assaults were not considered violent felonies under New York law, meaning that under the reforms, she could be released without bail. “The bail reform law needs to be amended,” de Blasio said. Gov. Andrew Cuomo has suggested that judges should now be granted more power to make exceptions for hate crimes. De Blasio wants to also give them power to consider a person’s danger to public safety. The state attorney general has similarly called for amendments, and some lawmakers are already planning new legislation to that effect.

But all of this fearmongering obscures several truths about bail reform. New York has long allowed people to leave jail before trial, regardless of their perceived threat, as long as they were rich enough to pay. In recent years, judges were increasingly releasing pretrial defendants without bail, too, especially for misdemeanors. And the reforms don’t affect most violent felonies—judges can still detain people like the machete-wielding man who stormed a rabbi’s house in Monsey, who’s currently in jail on a $5 million bond. Studies by the New York City Criminal Justice Agency, local organizations that bail people out of jail, and academics suggest the reforms will make New York safer. “The stories you’re seeing in local media are not representative of what really goes on in the system,” Michael Bloch, a former public defender in the Bronx, argues.

Here are some of the biggest myths about bail, and reasons why freeing people before their trials shouldn’t be such a scary prospect:

Myth 1: If you release people before their court dates, they will commit violent crimes or miss their hearings.

Not likely. In a 2012 Justice Department study of federal cases around the country, only 4 percent of people freed pretrial reoffended again before their hearings began. In a separate study of New York state cases, about 17 percent of people freed pretrial were rearrested, according to 2001 data from the Criminal Justice Agency. But only 2 percent were brought in for a violent felony. (Those numbers may be even smaller today, says Scott Hechinger, a senior attorney at Brooklyn Defender Services, given that New York has seen overall arrests and the police practice of stop-and-frisk plummet between 2001 and today.) And it’s important to remember that an arrest isn’t the same as a conviction; many of those cases are later dismissed, like Browder’s. While a small number of people do re-offend, most use their freedom to prepare for their trial, keep their job, care for their kids, or go to school. Bloch recalls one client who earned his MBA, got a promotion at work, and completed drug treatment during the two years before his case went to court. “He’s really not unique,” he says.

And overwhelmingly, people freed pretrial show up for their hearings. The Brooklyn Community Bail Fund, which for years has bailed out thousands of people accused of misdemeanors, found that 95 percent of them made all their court dates. In a larger study, the Criminal Justice Agency found that 86 percent of people in New York City released on their own recognizance in 2017 showed up to all their hearings. Under New York’s new reforms, if someone truly poses a flight risk, judges can still set restrictions on their release, like supervision or electronic monitoring.

The reason why is pretty simple: Jails destabilize people. Even a day or two inside can mean missing work, which can mean losing a job. If someone was homeless and staying in a shelter, they might not be able to reclaim their bed once they’re out. People detained longer might not be able to pay rent, or get treatment for serious medical conditions. All these things can make it harder for them to get back on their feet, and make it more likely for them to commit another offense.

For proof, just look to Brooklyn, whose reformist district attorney, Eric Gonzalez, stopped asking for bail in most misdemeanor and nonviolent felony cases about a year and a half ago. Violent crime in the borough is dropping. The same is true for many crimes in New Jersey, which virtually eliminated cash bail in 2017. “Bail has never been a mechanism for keeping us safe,” says Marie Ndiaye, an attorney at the Legal Aid Society in New York who helped advocate the new reforms.

Myth 3: Judges should consider how dangerous someone is before deciding bail.

This is a myth that Mayor de Blasio has been pushing. He wants lawmakers to amend the new bail reforms so that judges can also consider a person’s odds of further violence. But the thing is, even under the old system, New York judges weren’t allowed to base bail decisions on how dangerous they perceived a person to be, since that could lead to racial stereotyping and unfair outcomes. Previously, judges were only allowed to consider whether a person was a flight risk.

And under the new reforms, judges can still detain people accused of violent felonies. The only exceptions are for second-degree burglary and second-degree robbery—what Browder was accused of. (Even though he stole a backpack, under New York statute his alleged offense is technically considered violent.) The new reforms would probably not have helped Browder if judges were given the power that de Blasio envisions: The teenager would have likely been labeled a danger, says Hechinger of Brooklyn Defender Services, because he was a young person, charged with a violent crime, with a prior criminal record.

Myth 4: It’s unjust to release people who may be found guilty.

Many people accused of crimes are innocent, and their odds of winning their case are substantially greater if they’re free before trial. People stuck in jail are much, much more likely to plead guilty, even if they’re not, simply so they can get out and return to their lives. “I don’t recall a single case where somebody turned down a plea that got them out of jail that day, totally irrespective of the long-term consequences of having a conviction on their record,” says Bloch, who worked as a public defender for about seven years, with a case load of between 50 to 100 cases at any given time.

The Brooklyn Community Bail Fund has found that people freed pretrial are three times more likely to have favorable case outcome than those locked up. Hechinger recalls his first day as a public defender in Brooklyn, when he met a client facing a drug charge after being unconstitutionally stopped and searched by police while walking on the sidewalk. The man had a strong case and could have sued the cops—who allegedly jumped out of an unmarked van and pushed him against a wall to rifle through his pockets. But he pleaded guilty to get time served and avoid spending more days in lockup. “Bail doesn’t just hurt the person who is jailed, and it doesn’t just hurt their families they’re separated from; it also skews case outcomes,” Hechinger says. “Folks plead guilty just to go home, whether they’re guilty or innocent.” What kind of justice is that?