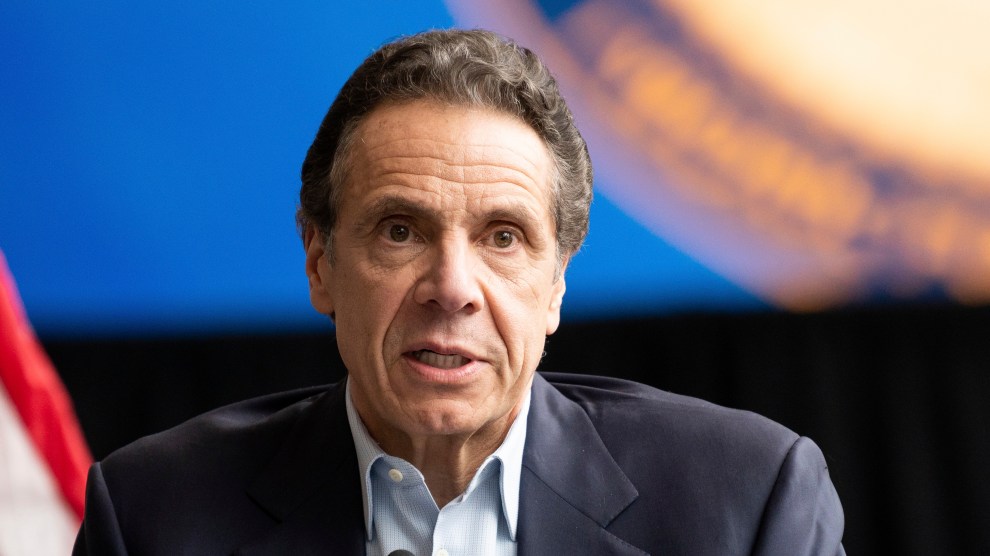 New York Gov. Andrew Cuomo is gaining admirers around the country because of his daily coronavirus briefings and endearing PowerPoint slides. But when it comes to low-income New Yorkers in the criminal justice system, he is giving the middle finger. Not only has he stalled on granting clemency to elderly prisoners who will be particularly vulnerable if they catch the virus; this week, he also helped pass a law that will incarcerate many more people in the very jails that are now reeling from terrifying infection rates.

Cuomo, alongside state lawmakers, will do this by rolling back the historic bail reforms that went into effect in January, which were designed to prevent people charged with most misdemeanors and nonviolent felonies from being locked up before their trials simply because they can’t afford to pay bond. Critics of the reforms, most notably police groups and the bail bond industry, argued without good evidence that the changes would lead to an uptick in crime. So in a budget deal Cuomo presented to state lawmakers this week—a version of which passed the the state Senate on Thursday and the Assembly in the early hours of Friday—he rolled back these reforms and made it easier for judges to send more people to jail before trial.

Under an agreement struck as part of the budget deal, New York courts can soon ask for cash bail for more than a dozen crimes that the reforms had made ineligible. These include violent and nonviolent offenses, such as vehicular manslaughter, sex trafficking, larceny, failure to register as a sex offender, second-degree burglary, and certain types of assault. Judges will also have more power to jail people who miss court appearances or are accused of additional crimes while awaiting trial. The new policy will go into effect in 90 days.

This is astonishing during a pandemic, when public health experts are warning that cities need to drastically lower their jail populations to prevent the virus from spreading far quicker than hospital systems can handle. Around the country, from California to New Jersey, courts are taking drastic measures to release thousands of people from local jails, which are breeding grounds for infections because of cramped quarters and often dirty conditions. New York lawmakers, on the other hand, will now force more people into jails.

And because New York is an epicenter for the coronavirus outbreak in the United States, its jails are already far deeper into the crisis than lockups in many other parts of the country. As of Thursday, 231 people at Rikers Island jail complex had tested positive, an infection rate about nine times faster than the rate elsewhere in New York City. As I previously reported, many inmates in the jail have other preexisting health conditions that would make them particularly vulnerable to serious complications or death from the virus. Because people cycle in and out of jails so frequently, infections inside Rikers are expected to bleed out into the rest of the city.

In a press briefing Thursday, Cuomo said passing the budget during the pandemic was “an extraordinary feat of government accomplishment.” His secretary, Melissa DeRosa, told reporters that although more crimes would now be bail eligible, “it doesn’t necessarily mean it will translate into more people” in jail. Public defenders are not convinced. “Attempting to crowd yet more people into cells at this time not only shows a flagrant disregard for New Yorkers’ rights, but a disregard for the well-being of the state at large,” the Legal Aid Society, Brooklyn Defender Services, and other public defenders said in a statement before the budget deal passed. “This is not the time to do rollbacks on bail,” Assemblyman Harvey Epstein, a Democrat, who voted against the measure, told NNY360. It’s “terrible for New Yorkers and it’s terrible for us.”

DeAnna Hoskins, president of JustLeadershipUSA, a criminal justice reform group, said the rollback during the pandemic would disproportionately harm people of color and low-income New Yorkers: “It goes to show you how this population is seen as expendable, how we’re considered second-class citizens.”

This post has been updated to reflect the Assembly vote.