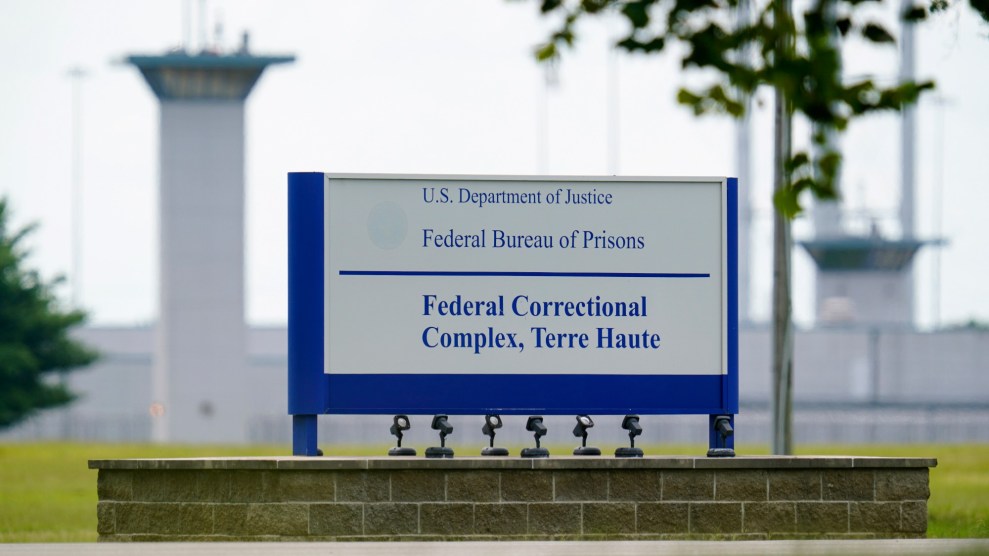 The Trump administration’s rush to resume federal executions after a 17-year hiatus may have caused a spike in cases of the coronavirus in a federal prison. The risk of catching coronavirus is heightened behind bars because conditions are often crowded and unsanitary, and incarcerated people are more likely to have illnesses and preexisting conditions that make them more susceptible to the infection. From the start, criminal justice advocates warned that resuming executions at the facility could put inmates, staff, and the wider community at risk of catching coronavirus. According to documents obtained by the ACLU, it appears that those fears have been realized.

“The government’s rush to kill has caused senseless risk for incarcerated people, prison staff, and everyone who lives in Terre Haute, Indiana.”

Last week, two inmates at the federal prison complex in Terre Haute, Indiana, died from the coronavirus. “Those deaths were part of a larger outbreak in the wake of the federal government’s decision to carry out an unprecedented number of executions there these past few months during a deadly pandemic,” Cassandra Stubbs, the director of the ACLU’s capital punishment project said in a statement. “The government’s rush to kill has caused senseless risk for incarcerated people, prison staff, and everyone who lives in Terre Haute, Indiana.” According to BOP’s data, more than 40 inmates have tested positive for the coronavirus and several have been hospitalized. The Terre Haute facility has been the site of five executions the federal government has carried out since July 14, despite capital punishment’s waning popularity.

According to the documents the ACLU obtained through FOIA requests and discovery during a federal lawsuit *, a US Bureau of Prisons staff member involved in carrying out the executions tested positive for the virus days before the first execution on July 14. The infected staff member had reported having “a lot” of contact with inmates and other staffers and did not always wear a mask while working. To make matters worse, BOP failed to test everyone who came into contact with the infected staff member and adopted a new policy that permits infected staff to return to work after just 10 days without symptoms and without being retested. Most public health experts recommend 14 days of quarantine.

The situation in Terre Haute, is a microcosm of what’s happening nationwide. Approximately 200,000 people have died from the coronavirus and the federal government’s response has been anemic, to put it mildly. Prisons have turned into major coronavirus hotspots, as I reported in May:

There have already been infections among inmates awaiting death in other parts of the country. In Arizona, seven death row inmates tested positive for the coronavirus while several others reported COVID-19 symptoms. One has died. “People tend to think of them as separated from the rest of society, but that is not the case,” Dr. Chris Beyrer, an epidemiologist at Johns Hopkins University, told the Texas Tribune. “Most [prison outbreaks] have begun with introductions from staff.”

Despite the mounting death toll and soaring infection rate, Donald Trump and his allies are determined to proceed with business as usual and are pushing for schools and businesses to re-open, though they are fully aware of the risks. The Department of Justice, which resumed the executions despite public outcry and is responsible for scheduling them, appears to be taking their cue from the president. Despite the outbreak and the COVID-19 deaths, two more inmates will be executed this week.

Correction: An earlier version of this article previously misstated how the ACLU obtained the information.