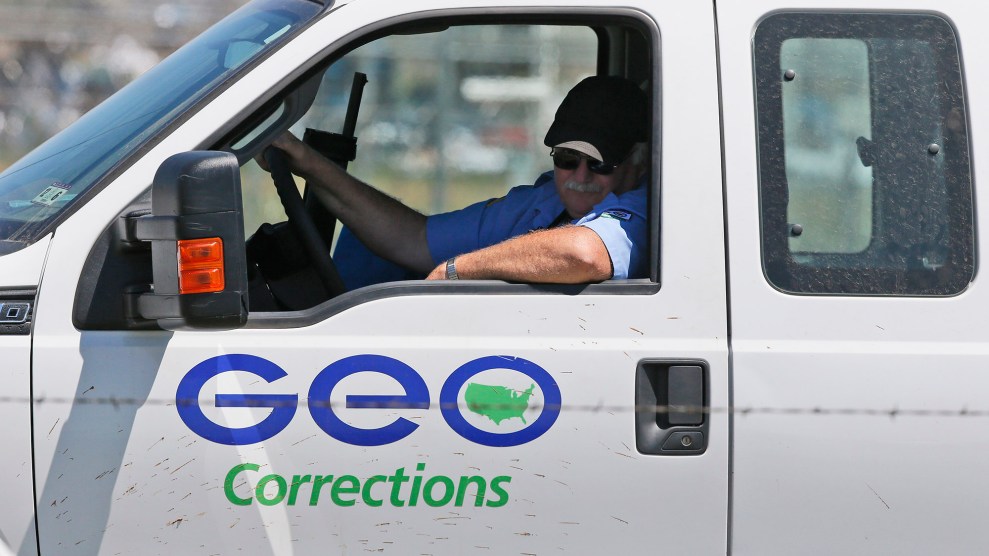 Private prison companies have taken a financial hit in the past week as President-elect Joe Biden’s win became apparent. Stock prices for the country’s two largest prison companies, the GEO Group and CoreCivic, have fallen 14 percent and 19 percent respectively since Election Day.

Biden’s campaign platform, like Hillary Clinton’s in 2016, promised that he would end the federal government’s use of private prisons. That’s a serious threat to both GEO and CoreCivic, which depend on federal contracts with the Bureau of Prisons (BOP), Immigrations and Customs Enforcement (ICE), and the US Marshals Service for more than 50 percent of their revenue, according to their most recent annual reports.

Private prison investors are adept at reading the political winds, and their consensus is that a Democratic president is bad news. In the summer of 2016, the Obama administration’s decision to end BOP contracts sent prison stocks plummeting, and they sagged for months as Clinton appeared to be the likely election winner. Donald Trump’s victory that November caused their share prices to soar. The industry benefited as the new administration detained tens of thousands of immigrants and imposed hardline immigration policies such as family separation that caused Democrats to turn against both ICE and the prison industry. (Private prisons did not hold children taken from their families, but they did hold their parents, as well as families detained together.)

That public backlash had major repercussions for the companies’ access to financing. JP Morgan and seven other banks, as well as the country’s largest public pension fund, announced in 2019 they would divest from the prison industry. Stock prices for both companies have been falling ever since, and have kept falling as policies to stem the spread of COVID-19 have led to reductions in prison populations. Meanwhile, California, Nevada, Minnesota, and Colorado have recently passed or are considering private prison bans.

On an earnings call on October 29, GEO Group CEO George Zoley acknowledged his company’s political volatility. “The current political rhetoric and mischaracterization of our role as a government services provider has created these concerns regarding our future access to capital,” Zoley said. But he argued that the company has historically thrived under both Republican and Democratic administrations due to the federal government’s reliance on private immigration detention. “As long as there’s a policy of border enforcement,” he told investors, “we will continue to play a role in supporting that policy.”

Despite their bipartisan rhetoric, the prison companies’ preference in this election cycle was clear. According to the Center for Responsive Politics, prison industry PACs, employees, and their families shelled out a record $2.5 million in campaign donations—mostly to Republicans, with Trump the top recipient. Zoley personally gave $200,000 to the Trump Victory PAC over the last two years.

It remains to be seen how quickly federal contracts could be ended—and whether Biden’s promise will extend to private facilities used to hold ICE or Marshals detainees. According to Margo Schlanger, former head of the office of civil rights and civil liberties at the Department of Homeland Security, it would be easy for the Biden administration to reissue an Obama administration policy to phase out BOP private prison contracts. (That announcement had followed a Mother Jones investigation into a Louisiana prison run by CoreCivic, then known as the Corrections Corporation of America.) Former Attorney General Jeff Sessions rescinded the policy shortly after Trump took office.

Ending those contracts would affect thousands of incarcerated people: Over 14,000 people, or about 9 percent of the BOP population, are currently held in private prisons. But it would be far from a devastating blow to the industry. “We think our risk is pretty minimal there,” CoreCivic CEO Damon Hininger told investors on an earnings call last Thursday.

President-elect Biden’s platform is murkier on the topic of immigration detention than it is on federal private prisons. It says he will “make clear” that the feds “should not use” private facilities to hold detainees, including undocumented immigrants. What that means for ICE, as well as the Marshals Service—which uses private prisons to hold about 17 percent of people arrested by federal agencies—is not obvious.

Eliminating for-profit immigration detention would be difficult because it is so entrenched: ICE relies on for-profit facilities to hold around 70 percent of the people in its custody. Federal funding for detention has escalated dramatically since 2012, as more Central American migrants began arriving at the southwest border. Much of the money went to prison corporations: In the last fiscal year, CoreCivic and GEO relied on ICE contracts for nearly a third of all their revenue. In 2016, a DHS advisory council that recommended against continuing private ICE detention concluded that such a move was nevertheless unlikely. “Much could be said for a fully government-owned and government-operated detention model, if one were starting a new detention system from scratch,” its report stated. “But of course we are not starting anew.”

Schlanger, however, argues the coronavirus crisis could be an opportunity for Biden to reduce the scale of immigration detention. According to ICE statistics, the number of people in immigration detention dropped by about 60 percent over the last year, with much of the decline due to the pandemic. “ICE doesn’t have good alternatives for private or county operators,” Schlanger said in an email. But, she added, “ICE’s detention population is very low right now. Which highlights the appealing option of simply keeping the population low.”

Last Thursday, as Biden’s victory grew increasingly likely and stock analysts sought information about what his company would do, Hininger seemed to fall back on the argument that the new president might not get around to delivering on his campaign promises. “If Joe Biden were to become the next president, I think there is a lot on his plate to deal with,” Hininger told investors. “Certainly, COVID-19 is going to be mission number one to help get that under control. But when you think of all the other initiatives that are on his plate, health care, tax reform, climate change, trade negotiations, it’s probably a while before you would expect the focus to become on private prisons.”