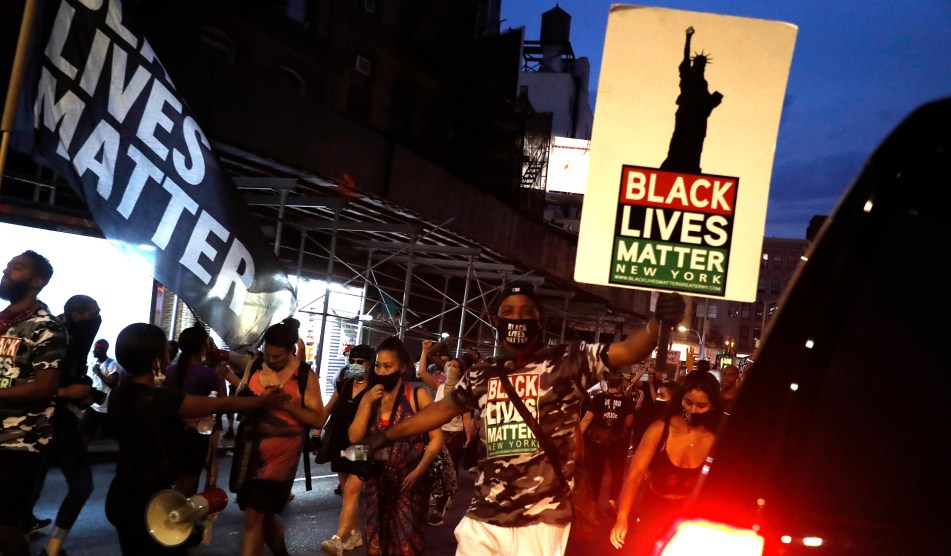 This story was originally published by ProPublica and The City.

It was one of the most brutal police responses to last year’s Black Lives Matter protests.

As hundreds of demonstrators were marching peacefully in the Bronx on the evening of June 4, New York Police Department officers blocked their way from in front and then behind, trapping the protesters in an ever-tightening space that footage shows ultimately spanned about three car-lengths.

Officers soon waded into the crowd, pepper-spraying, kicking, punching and swinging their batons. “People were being stampeded, they would try to get up and they’d get hit again,” recalled Conrad Blackburn, a criminal defense lawyer who was there as a legal observer. “People were bleeding from their heads, with cuts all over their bodies. People couldn’t breathe. They couldn’t see.”

About 60 protesters and bystanders were injured, according to a report by Human Rights Watch. Video footage the organization compiled captures the terror in people’s voices. “We’re being crushed!” one person screams. Another voice pleads, “Mommy!”

At the demonstration, overseeing the NYPD’s response, was the top uniformed officer, Chief of Department Terence Monahan.

A recent federal lawsuit by New York State Attorney General Letitia James says that Monahan “actively encouraged and participated in this unlawful behavior.” Other on the protests have also offered scathing criticisms of the NYPD’s response.

But one voice has been conspicuously quiet: The agency whose sole responsibility is to investigate NYPD abuse of civilians.

The New York City Civilian Complaint Review Board, or CCRB, received about 750 complaints of officers abusing Black Lives Matter protesters across the city last year. But it has not yet released any findings from investigations into those complaints.

The CCRB declined ProPublica’s request for an accounting of the status of its investigations. It won’t say how many investigations have been closed and how many are still open. Most critically, it won’t disclose how many officers have been charged with misconduct.

The NYPD also did not respond to ProPublica’s questions about any discipline stemming from abuse of protesters.

Created nearly 70 years ago, originally as a part of the NYPD, the CCRB has long been cautious about crossing the department it is charged with investigating. It is currently overseen by a 15-member board, with members appointed by the mayor, city council, public advocate and police commissioner.

Internal CCRB communications about its investigations into the NYPD response to the protests give a glimpse of the dynamics involved: They show progress on the investigations has been slowed in part because of the NYPD’s recurrent lack of cooperation—which ProPublica has previously detailed—and the CCRB leadership’s own caution about confronting it.

In October, the then-deputy chief of the CCRB’s investigative unit, Dane Buchanan, emailed the agency’s executive director, Jonathan Darche, to say that investigators were “ready to schedule Chief Monahan for an interview.” Buchanan asked Darche whether he’d like to discuss it first “or should we just have an investigator reach out to his office to get his availability?”

Darche, who reports to the board, responded that he would handle it himself and raise it in a meeting with the NYPD the next day.

Buchanan continued to check in, but the issue went unresolved for months. Monahan was reportedly finally scheduled for an interview to be conducted last Friday, just after he had announced he was retiring from the NYPD after 39 years. The move means Monahan would no longer be subject to departmental discipline.

As Monahan said he was retiring, Mayor Bill de Blasio appointed him to help run New York’s COVID-19 response. At a press conference, de Blasio deflected a question about choosing an officer under investigation, saying, “I think the message this sends is that we’re moving the recovery forward.”

In a statement, the CCRB told ProPublica it was “not prepared to interview Chief Monahan in October” and that “it intends to release a report detailing the factors that complicated its investigations into the police response to last summer’s protests.” The CCRB said it will share the results of investigations once they are closed and once federal litigation, such as the attorney general’s suit, is over.

Emails show CCRB staffers had repeatedly raised red flags about the NYPD’s failure to produce evidence. “We continue to be plagued with false negatives in protest cases,” one staffer emailed in the fall, referring to instances where the NYPD claimed it had no body-worn camera footage of an incident only for the CCRB to later discover footage exists.

Another email cited an example where an officer mentioned in an interview she had activated her body cam during a confrontation with a protester. The NYPD had told the CCRB that no such footage existed.

“Allegations of us not providing BWC footage is false,” the NYPD said in a statement, referring to body-worn cameras. “We have spoken with senior executives at the CCRB who state they do not have any complaints and are pleased with the Departments response to providing BWC video.”

Other records were also matters of contention. “We are hitting a critical point with the protest case documents,” Buchanan wrote in October, referring to police records that could help the CCRB identify both officers and civilians. “Many of them have been outstanding for a long time.”

The CCRB did decide to go public about one roadblock. Officers had been refusing to do interviews by video, which the agency was using because of the pandemic. Hundreds of cases were stalled as a result. After the CCRB announced an emergency hearing about it in August, the NYPD ordered officers to participate in video interviews.

But the CCRB stayed quiet on other impediments, and staff were sometimes discouraged from raising them even with the NYPD itself. The agency’s then-head of policy, Nicole Napolitano, wrote in a September email that she had been barred from asking the NYPD about its policies for retention of protest footage. “I just spoke with Matt, and he’s not a fan of me asking TARU any questions,” Napolitano wrote, referring to the CCRB’s general counsel, Matthew Kadushin, and the NYPD’s Technical Assistance Response Unit.

In the same email, Napolitano noted that she had proposed writing a public report on the NYPD’s response to the summer protests but that Kadushin had instructed her not to, saying it was too early.

Napolitano, Buchanan and two other senior staffers, who together had more than 50 years of experience at the agency, were abruptly laid off in November in what the CCRB has described as a needed cost-saving restructuring. (The four staffers declined to comment for this article.)

Emails show Buchanan had continued to follow up about the status of interviewing Monahan until the day he and the others were let go.

The four former staffers filed a lawsuit in January claiming that they were fired in part for “demanding greater accountability and transparency with respect to the handling of complaints of police misconduct against NYPD officers.” The suit, which asserts the four were illegally retaliated against for raising concerns, says Darche “often skewed CCRB policies with a view towards currying favor with the NYPD and/or the Mayor’s Office.”

In one example from 2019 described in the suit, Darche objected to the term “bias based policing” and warned that any employees who used the phrase would be disciplined or fired.

The CCRB declined to comment on the former employees’ lawsuit and did not make Darche or Kadushin available for interviews. The agency pointed to a previous statement by the chair of the CCRB, who was jointly appointed by the mayor and City Council Speaker Corey Johnson. “The difficult but necessary restructuring the CCRB went through last year was motivated by a need for change during this difficult financial time for the City,” said the chair, the Rev. Fred Davie.

A City Hall spokesperson also said at the time that the mayor “supports that step forward.”

The CCRB’s lack of independence has long stirred friction within the agency and with City Hall and the NYPD. Its powers have expanded over the years, most notably when it was given subpoena power in the early 1990s. But the agency, which has about 215 staffers and a $20 million budget, does not have direct access to body camera footage and other NYPD records. Instead, it effectively has to rely on the cooperation of the NYPD, which has a budget of nearly $6 billion and is the most powerful agency in city government.

The NYPD has repeatedly been cited for overly aggressive responses to large protests. “It is deja vu all over again in some ways,” the head of New York City’s Department of Investigation after issuing a scathing report on the NYPD’s response to the Black Lives Matter protests.

During the 2004 Republican National Convention in New York, an NYPD commander on the scene told hundreds of peaceful protesters, ““Have a safe march,” then a few minutes later ordered them arrested.

A federal judge later ruled there was “not even arguable probable cause to make those arrests.” The city eventually settled a lawsuit over the NYPD’s RNC response for $18 million.

The commander at that scene? Terence Monahan.