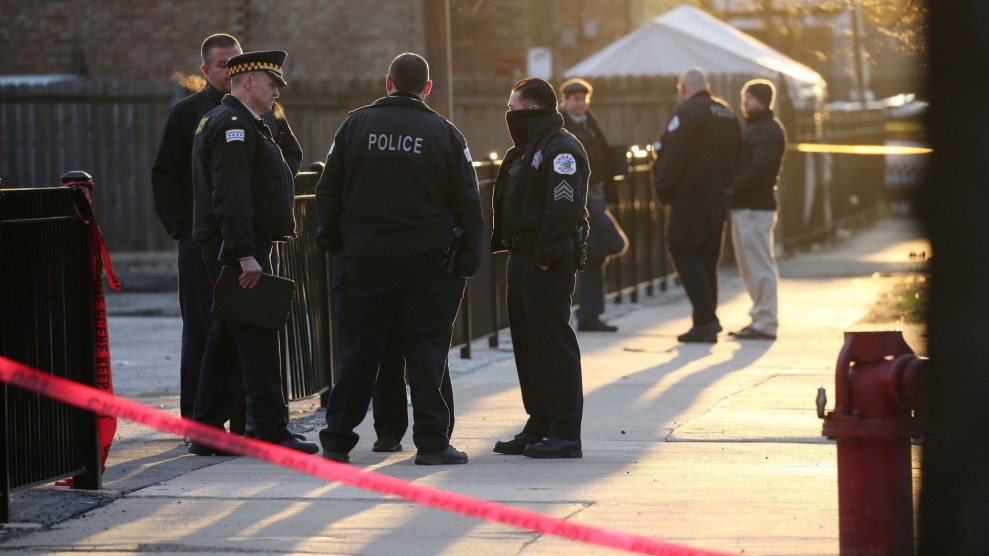 Last Sunday, Elizabeth Toledo was relieved to see her 13-year-old son, Adam, walk in the door of their West Chicago home. She’d filed a missing-person report with police a day before, but he returned in time to join his mom at a relative’s memorial service. That night she put him to bed in a room he shared with his brother, grateful he was back.

The next morning, he wasn’t there. Adam Toledo had gone out, and in the middle of the night, around 2:30 a.m., Chicago police shot and killed the seventh-grade boy in an alley behind a high school, not far from his home in Little Village. But nobody told Elizabeth, who thought he’d gone missing again.

“Someone knew early on the person shot was actually a young teenager.”

When the police finally reached out to her on Wednesday, a full two days after the shooting, they requested a photo of Adam. She assumed it was related to her earlier missing-person report. A half hour later, they knocked on her door and asked her to go to the Cook County Medical Examiner’s Office to identify his body. “I couldn’t even see him; they showed me a picture of my son Adam for just a couple of seconds,” she told Block Club Chicago. According to her attorney, she wasn’t told how he died—he was shot in the chest—until she met with authorities later.

In the days after Chicago police killed the boy, Elizabeth Toledo wasn’t the only one kept in the dark; city officials were also slow to provide key details to the public. In a carefully constructed statement issued hours after the shooting, the police department only revealed that officers had seen “two males in a nearby alley,” and that one of them was armed and began to flee. (The other person in the alley was a 21-year-old man.) A “foot pursuit…resulted in a confrontation,” and an officer “fired his weapon, striking the offender in the chest.” Along with these bare details, the police department tweeted a photo of a gun they said was recovered at the scene.

On Thursday, Chicago Police Superintendent David Brown clarified that the so-called male “offender” who was shot by police was a juvenile. But even then, according to Carlos Ballesteros, a reporter at Chicago-based Injustice Watch, he did not yet specify the boy was just 13 years old; it took reporters digging through an autopsy ledger to break the news about his age that day, according to Lakeidra Chavis, a Chicago-based reporter at the Trace, which covers gun violence. “Someone knew early on the person shot was actually a young teenager. That information was omitted while crafting a self-defense narrative,” she tweeted.

The city also delayed the release of body-cam footage that captured the shooting. Initially, the Civilian Office of Police Accountability, which investigates police shootings, said the video could not be released because Adam Toledo was just a juvenile. On Friday, the agency reversed its position: It had made a mistake, it stated, and would release it within 60 days. Toledo’s family confirmed they would be shown the footage next week. “The public deserves a complete window into the split-second decisions our officers are forced to make,” Superintendent Brown tweeted Friday.

The obfuscation echoes the city’s response to the 2014 police killing of 17-year-old Laquan McDonald, another minor from Chicago’s West Side. Officer Jason Van Dyke, who is white, shot and killed McDonald, who was Black, while responding to a call about alleged car break-ins, and initially claimed the teen lunged at him with a knife. “City officials waited more than a year to release police dash-cam footage of the shooting—and did so only after a judge ruled in favor of an independent journalist whose public records requests were repeatedly denied,” Brandon Patterson reported for Mother Jones at the time. The video showed that Van Dyke shot McDonald 16 times, even after the teen had fallen to the ground, and sparked widespread protests and calls for then-Mayor Rahm Emanuel to resign. In 2018, Van Dyke was found guilty of second-degree murder, as well as 16 counts of aggravated battery with a firearm.

After more details of Adam Toledo’s death became known this week, Alderwoman Rossana Rodriguez told Block Club that incidents like the case have left her with little trust for the police. “For a very long time the police have been taken at their word. We’re not accepting that anymore,” she said. “You shot a 13 year old.”

“We’ve figured out the police are never going to tell the truth at all or they’re only going to share what makes them look good,” she added.

The officer who killed Adam has been placed on administrative duty for 30 days. On Friday night, a small group of protesters marched through Logan Square demanding justice. In a news conference earlier that day, Elizabeth Toledo said she wants to know the truth about why the officer fired a bullet into her son. “I just want to know what really happened to my baby,” she said, crying. An attorney said Adam had no criminal history, and that he once dreamed of becoming a police officer himself. Elizabeth Toledo recalled him as being a happy kid who loved animals, and said he was far too young.

“He still played with Hot Wheels,” she said in tears.