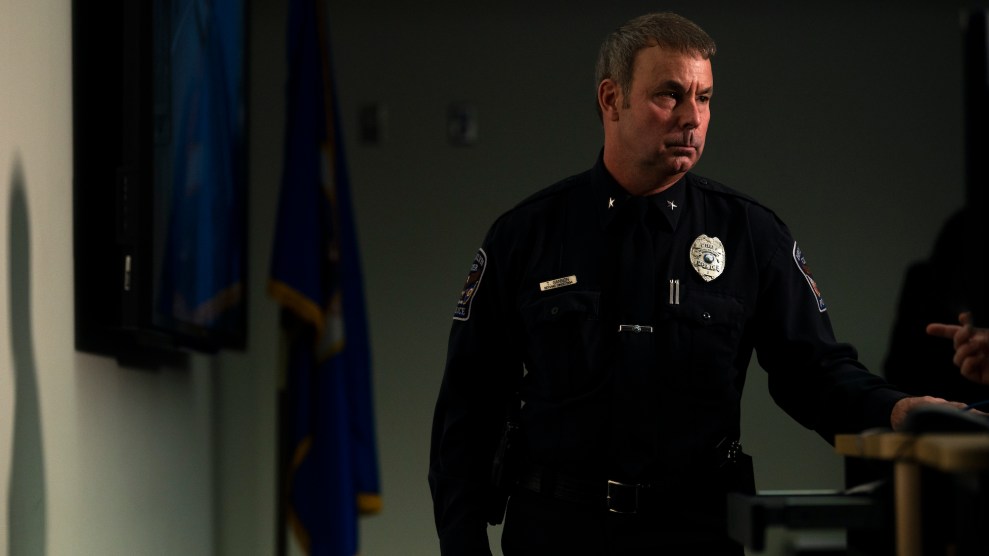 Authorities have released body camera footage of the shooting of Daunte Wright, a 20-year-old Black man who was killed by a police officer on Sunday afternoon in Brooklyn Center, a suburb of Minneapolis. The footage appears to depict an officer yelling “Taser! Taser!” as she points a weapon at Wright for several seconds. Then she appears to fire a shot at Wright through the open door of his car.

“Holy shit,” the officer says in the footage as the car accelerates away. “I just shot him.”

The officer has been placed on administrative leave while the Minnesota Bureau of Criminal Apprehension investigates. At a Monday press conference, Brooklyn Center Police Department Chief Tim Gannon called the shooting an “accidental discharge.” “It is my belief that the officer had the intention to deploy their Taser, but instead shot Mr. Wright with a single bullet,” Gannon told reporters.

How could a police officer make such an error? Pressed on the officer’s training, background, and length of employment, Gannon demurred, calling her only “very senior.” Members of his police department, he explained, wear their gun and Taser on opposite sides of their body and go through “numerous trainings throughout the year” on firearms, Tasers, and tactics.

The police department’s own policy manual, posted on Brooklyn Center’s city website, offers some further clues to the situation. The manual is written by a private company called Lexipol, which sells policy handbooks and training modules to police departments across the country. According to the company, the policies it drafts for police—including those that govern the use of force—are based on “best practices,” court precedent, and federal and state laws, and police departments are encouraged to customize them.

But some experts criticize the policies for being overly permissive or vague, giving officers as much latitude as legally possible. And that’s by design. “One of our secret sauces, so to speak, is rarely if ever will you see the use of the word ‘shall’ in our policies,” Bruce Praet, an ex-cop and one of Lexipol’s founders, said in a 2019 webinar. “Nothing in police work is black and white except the car you drive…So policies need to be flexible.” One of those policies states that an officer’s use of deadly force is justified in the face of an “imminent” threat of serious injury or death. Imminent, according to Lexipol, is broader than immediate, and includes any situation in which an officer “reasonably believes” an individual has a weapon and intends to use it.

As I reported last year in a story involving the fatal police shooting of Kris Jackson, a Black 22-year-old in California:

Some of the company’s policies, including the use-of-force policy challenged by Jackson’s family, depart in significant ways from recommendations by mainstream policing organizations. The National Consensus Policy on Use of Force, a collaboration between 11 major law enforcement groups, requires cops to try deescalation techniques before using force if possible. Lexipol discourages police departments from requiring them. Lexipol’s policy allows officers to shoot at moving vehicles in some circumstances, a practice that the Police Executive Research Forum recommends against because it may injure or kill civilians and officers. The ACLU has contested Lexipol’s rules for handling immigration violations, which in some states include a provision allowing cops to consider “a lack of English proficiency” when deciding whether someone may have entered the country illegally.

Despite these challenges, the company has marketed its policies as a way to decrease cities’ liability in police misconduct lawsuits. In its communications with potential clients, Lexipol has claimed that agencies that use its policies are sued less frequently and pay out smaller settlements, according to a Texas Law Review analysis of public records. The company’s critics argue that it accomplishes this with vague or permissive rules that meet bare-minimum legal requirements rather than holding officers to a higher standard. “They want to make it impossible, or nearly impossible, for anybody to point to the policy and say it was violated,” says Carl Takei, an ACLU senior staff attorney specializing in police practices. “Defining ‘imminent’ in a way that removes all of the immi­nence? That’s a classic Lexipol policy.” Samuel Sinyangwe, a racial justice activist and data analyst who has looked at hundreds of police departments’ policies, concludes that Lexipol’s use-of-force guidelines usually lack requirements that have been shown to reduce police violence. Lexipol did not respond to a request for comment.

Since the death of George Floyd sparked a nationwide outcry against police violence and racism, Lexipol has updated its use of force policy and rolled out a website dedicated to explaining it. Now, the company may come under scrutiny again. On Sunday, Sinyangwe drew attention to Brooklyn Center’s use of Lexipol policies on Twitter, writing that the company has “no interest in accountability.”

Shooting at vehicles is banned in the Brooklyn Center police use of force policy under many circumstances, but there are loopholes intentionally written into that. Their policy was written by Lexipol, a company that has no interest in accountability. https://t.co/D8TdM46QYh https://t.co/sgh551MM1w pic.twitter.com/qP2dBZCEha

With Wright’s death currently under investigation, it’s still unclear what Lexipol policies adopted by Brooklyn Center police may be relevant to the shooting. For example, according to the department’s Lexipol-provided manual, Tasers must be “clearly and distinctly marked to differentiate them from the duty weapon and any other device.”

Yet other language in the policy is vague and full of loopholes. “The use of the TASER device on certain individuals should generally be avoided,” the policy states, unless other options “reasonably appear ineffective” under the “totality of the circumstances.” Those “certain individuals” who shouldn’t be tased include “obvious juveniles”; those with “obviously low body mass”; and those “whose position or activity may result in collateral injury (e.g., falls from height, operating vehicles).”

After Wright was shot, his car traveled for several blocks before crashing into another vehicle. He was pronounced dead at the scene.