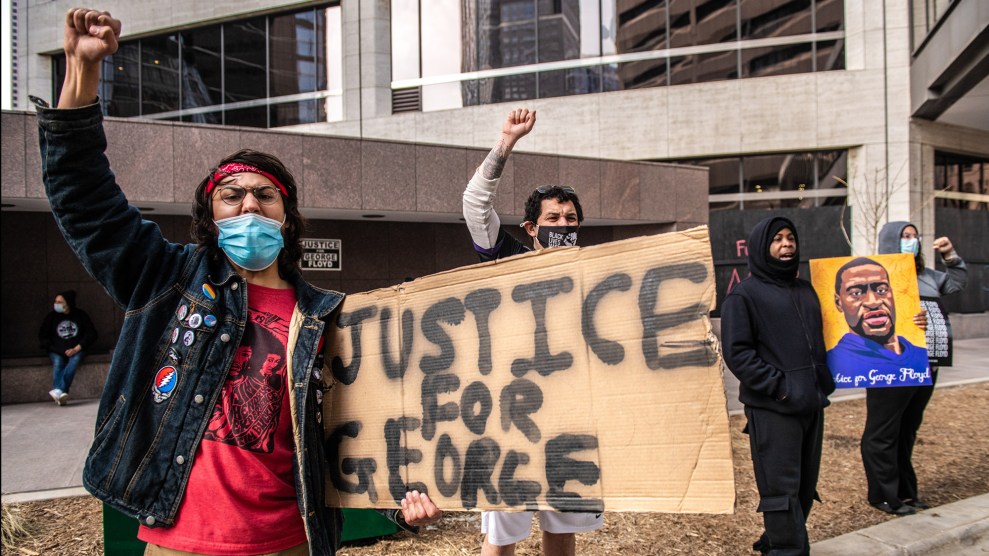 Late Tuesday afternoon, the jury in the trial of Derek Chauvin delivered its verdict: guilty on all three counts in the killing of George Floyd.

The verdict comes just less than a year after Chauvin, a white former Minneapolis police officer, forcibly kneeled on Floyd’s neck for nine minutes and 29 seconds, ultimately suffocating and killing him. Floyd, a Black man, was 46 years old. The video was shared widely and sparked massive waves of protests last summer under the banner “Black Lives Matter”—first in Minneapolis and then across the United States, people took to the streets to demonstrate against police violence and demand racial justice.

The 12 jurors—six of whom are white, four Black, and two multiracial—heard three weeks of testimony and deliberated for about 10 hours. Chauvin was charged with second-degree unintentional murder, third-degree murder, and second-degree manslaughter.

During the trial, the state of Minnesota presented a case that sought to paint Chauvin as a bad cop who violated the city’s use of force policy when he restrained Floyd with his knee. Several MPD officers, including the chief, Medaria Arradondo, testified that Chauvin violated protocol and used excessive force. The state also had medical experts testify that Floyd died because of the knee on his neck. “You can believe your eyes. It was what it was,” Jerry Blackwell, a prosecutor for the state told the court during closing arguments.

Eric Nelson, Chauvin’s lawyer, argued that Chauvin operated within the confines of reasonable force. He told the court that Floyd died not from the knee on his neck but a drug overdose and heart disease. In an attempt to confuse jurors, one witness, Dr. David Fowler, also testified that car exhaust fumes could have contributed to Floyd’s death. Nelson also intimated that Chauvin had to restrain Floyd for so long because the victim had “superhuman strength” and was much larger than Chauvin— harkening back to a racist myth about the power and aggression of Black people. “There is absolutely no evidence that Officer Chauvin intentionally, purposefully applied unlawful force,” Nelson told the jury.

Nathalie, who closely followed the trial over the past few weeks, joined Mother Jones Podcast host Jamilah King shortly after the jurors came to a decision. “I was really surprised by how quickly the verdict came back,” Nathalie says. “It feels like a huge moment.”

Although Chauvin’s final sentencing remains to be determined, he will likely spend many years in prison. Second-degree and third-degree murder charges generally carry a 12-and-a-half-year sentence, while second-degree manslaughter carries a four-year sentence.

In her analysis of this important moment, Nathalie also touched on the barely latent racism in the defense’s arguments, the issues with a televised trial, and how this verdict fits into the long fight for racial justice in America. “A lot of people are eager to hold this guilty verdict up as this big symbol of change,” Nathalie says on the podcast. “But after so many viral police shootings, one guilty verdict doesn’t satisfy that appetite for actual change.”