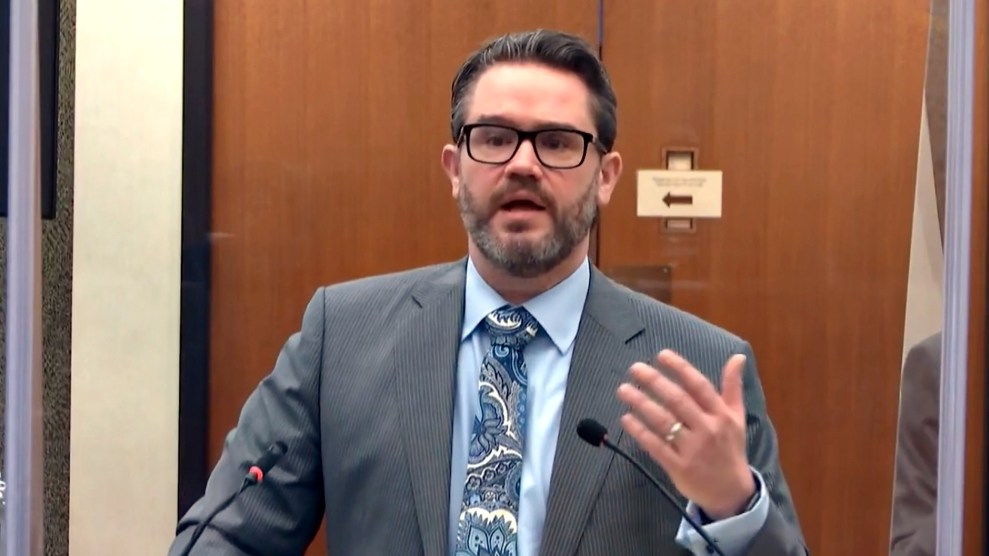 “This was not an easy struggle,” said Eric Nelson, the attorney for the cop who killed George Floyd. In his opening statement Monday in the trial of Derek Chauvin, Nelson was at pains to portray the events of May 25, 2020, as a struggle between a powerful brute and a law enforcement official trying to do his job. He wanted the jurors to visualize Floyd, pinned to the ground and struggling for air, as bigger, taller, stronger than Chauvin, the man whose knee was on Floyd’s neck. He wanted them to understand that Floyd’s size alone meant he was a threat.

“You will see that three Minneapolis police officers could not overcome the strength of Mr. Floyd,” Nelson told the jury. Then he provided the tale of the tape, like some boxing promoter trying to hype the underdog: “Mr. Chauvin stands 5-foot-9, 140 pounds. Mr. Floyd is 6-3, weighs 223 pounds.”

And with that, the myth of the supernegro had arrived in court. The argument the defense was making was essentially that this Black man was so large, so powerful, and so dangerous that the only thing the tiny white cop could do to stop him was to kill him.

The idea that Black people have superhuman abilities dates back to the days of slavery. In 1811, an unnamed doctor in London published a book called Practical Rules for the Management and Medical Treatment of Negro Slaves. In it, he posits that slaves’ bodies were “much less exquisite” than white ones and thus they didn’t feel pain; they didn’t die from infections that white people died from; and they didn’t fear death. “It is certainly a very great [advantage] to be able to face death, the inevitable lot of all, as they do, not only without dismay, but with an indifference,” the author writes. To this day, many doctors believe Black people have a higher pain tolerance. And studies have shown that many people, including other Black people, believe Black people are stronger, faster, and more dangerous than other races. In the real world, this idea can be and often is fatal for Black people.

It’s clear that the defense wants the jury to see Floyd as a combative drug user who had to be restrained lest he become violent. Intimations of his vulnerability had to be banished from the record. While cross examining Genevieve Hansen, a firefighter who witnessed Floyd’s death, Nelson asked about Narcan, a nasal spray used to reverse opioid overdoses. “You’ve had a lot of experience with people overdosing—people become combative when revived?” he asked. “Not often. But it happens,” Hansen replied. In an earlier statement, Hansen had described Floyd as small. “Did you describe Floyd as a small, slim man?” Nelson asked her, implying that Floyd was anything but. Hansen acknowledged that she had, saying he appeared to be small with three grown men on top of him.

In the world evoked by the defense, the cops were innocents doing their civic duty with savagery all around them. Nelson tried to portray the bystanders as an unruly and angry crowd, attempting to interfere with police work. As he cross-examined Donald Williams, a Black man who witnessed Floyd’s death, he repeatedly asked Williams if he was “angry.” Williams responded calmly, “No, you can’t paint me out as angry,” knowing full well that being portrayed as an angry Black man would harm his credibility.

Chauvin is not the first police officer to perceive a Black person as a threat. In 2014, white police officer Timothy Loehmann fatally shot 12-year-old Tamir Rice, who was playing in a park with a toy gun. The police officer later said that he thought Rice was an adult. That same year, a white cop named Darren Wilson drew on the same racist stereotypes in his testimony before a grand jury investigating his shooting of 18-year-old Michael Brown in Ferguson, Missouri. “I felt like a 5-year-old holding on to Hulk Hogan,” said Wilson, only an inch shorter than Brown.

Of course there’s a glaring inconsistency in the defense’s arguments. On the one hand, we have the superhuman Black man, whose immeasurable strength left the cop with no choice but to kneel on Floyd’s neck until he died. On the other, we have the argument that originated in the right-wingosphere and was suggested by Nelson on Monday: that Floyd was under the influence of opioids when he died. Floyd did, in fact, have a substance abuse problem. And while the state of Minnesota is arguing that Floyd died due to excessive force at the hands of Chauvin, the ex-cop’s lawyer said in court that Floyd died due to a combination of drug intoxication, heart disease, and an enlarged heart. In other words, Floyd was so weak that anything, even a routine stop by a police officer, could kill him.

So which is it? Was Floyd a superhuman Black man incapable of feeling pain or was he one normal interaction away from death?

Many of the bystanders who testified in court were brought to tears recalling the day. Darnella Frazier, a teenage witness who recorded video of Floyd’s killing, was in tears as she explained the lasting trauma from that day. Her 9-year-old cousin told the court she felt “sad and kind of mad because it felt like [Chauvin] was stopping his breathing and he was kind of hurting him.” Another teen, identified only as Alyssa, said she was “emotionally numb” in the days after Floyd’s death.

It’s not the first time this trope will be deployed against Black people, and it certainly won’t be the last. But still there was something so jarring to listen to children and adults testify tearfully about what they witnessed at the scene of George Floyd’s death and to understand what Nelson was saying: Floyd, gasping for air, crying out in pain, calling out for his mother, was the angry, aggressive, combative one, a man so powerful that if Chauvin had removed his knee, well, that’s when the real danger would’ve begun.