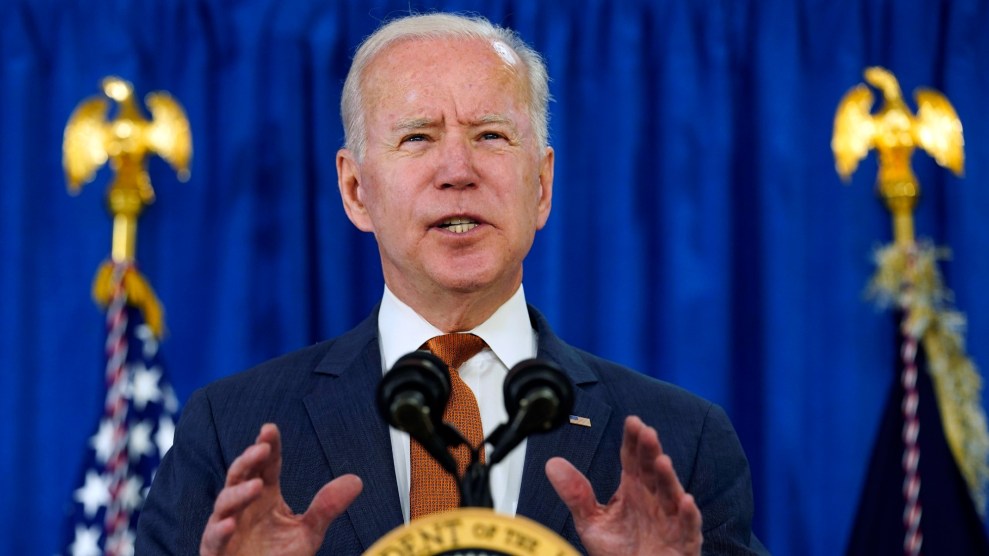 The white supremacist who murdered nine Black churchgoers in Charleston, South Carolina, in 2015 is in the news again. Dylann Roof, who was sentenced to death by the federal government in 2017, has filed an appeal. His lawyers have argued that the judge in his trial should not have permitted Roof to represent himself because he is mentally incompetent, and therefore his sentence should be overturned. His appeals were to be expected—but they highlight urgent questions about the federal death penalty and President Joe Biden’s pledge to end the practice.

Biden has made history as the first president to expressly oppose the death penalty during his campaign, which was a radical reversal from his position during his 36-year tenure as the senator from Delaware and as Barack Obama’s vice president. In its criminal justice platform, the Biden campaign pledged to abolish the death penalty at the federal level and incentivize states to follow suit. In the past, candidates avoided taking this stance on capital punishment out of fear of appearing weak on crime and soft on criminals. His death penalty stance during the waning days of the Trump administration marked yet another difference between him and the incumbent president who had always been a fierce proponent of capital punishment.

President Donald Trump was a historic figure in criminal justice for many reasons, but especially for the fact that he was responsible for the first federal executions in 17 years. In the final six months of his only term in office, he put 13 federal inmates to death, including three after he’d lost the 2020 election. Because it was so unprecedented, the execution spree garnered a lot of media attention for an issue that hasn’t always been a top concern for the wider public. Biden’s campaign promise to end capital punishment was only one item in a long list of Trump-created messes that the new president promised to fix.

But nearly five months into the new administration, there’s been little follow-through on the commitment. Granted, the current administration has no plans to schedule executions for the 46 men on the US government’s death row. As Abraham Bonowitz, the executive director of Death Penalty Action, a nonprofit dedicated to abolishing the death penalty, notes, “The people on death row are safe—for the moment.” But there’s a real risk in not going further than simply not scheduling executions.

The tasks ahead for Biden—addressing climate change, rampant economic inequality, crumbling infrastructure, and the ongoing pandemic—are all monumental. And perhaps the federal death penalty just doesn’t feel as urgent because the president has already promised that his administration would not be executing any inmates. But all it will take to resume federal executions is one determined GOP president.

While the states have executed more than 1,500 people since the US Supreme Court reinstated the practice in 1976, the federal government had only put three to death since 1988—until last year. In 2014, former President Barack Obama ordered a policy review on federal death penalty, while the US government investigated lethal injection protocols. The move came after a highly publicized botched execution in Oklahoma, but, as Trump vividly demonstrated, an unofficial moratorium is hardly enough to stop a determined president. Obama’s failure to make a meaningful impact on capital punishment at the federal level left the door open for an execution-loving president to fire up the death machine.

If the states with the death penalty foreshadow what a future GOP president might do on the execution front, it’s not a good sign for abolitionists. Death sentences and actually following through on them may have been on the decline for more than a decade, and the United States remains one of the few countries that still uses this as a punishment. But now that lethal injection drugs are not readily available—manufacturers are refusing to allow states to use their products for these actions—states still carrying out the punishments are going to great lengths to insure state-sanctioned killings continue. After a 10-year hiatus in South Carolina, due to the difficulty in acquiring the drugs, lawmakers recently passed a law that would make the firing squad an alternative method. Arizona is refurbishing its gas chamber, and so is Alabama. Following Trump’s example yet again, many Republican-led states want to reenergize their execution chambers. Should a Republican succeed Biden, it seems inevitable that this will take place on the federal level as well.

“It’s on us as abolitionists to build a coalition to get him a bill to sign.”

So, what are Biden’s options? One is legislation. In July 2019, when the Trump administration announced its intention to execute death row inmates, Rep. Ayanna Pressley (D-Mass.) and Sen. Dick Durbin (D-Illinois) introduced a bill that would abolish the practice and resentence every person on death row. Nearly two years later, the bill has support from 90 members of Congress and 18 co-sponsors. This is what advocates like Bonowitz are focused on right now. “It’s on us as abolitionists to build a coalition to get him a bill to sign,” he explains. But time is of the essence. It’s clear that the only way legislation like this would pass both chambers is with the Democrats in the majority. If the Republicans win back the House next year, the chances of abolishing the federal death penalty become infinitesimal.

There is another option that would make it much harder for any future president to carry out executions. The president has the power to commute all of the sentences of the people on death row himself, without congressional approval. “Joe Biden could do that tomorrow,” Bonowitz says “with the stroke of the pen.”

Of course, at a time when violent crime is rising across the country and conservatives are falsely blaming it on anti–police brutality activists and movements to defund police departments, it’s easy to see why Biden would hedge on removing dozens of people from death row. I can already hear the bad-faith attacks describing Biden and the Democrats as being supporters of Roof and his racist crimes. Yet this president has also tried to make racial justice the cornerstone of his administration, and, like seemingly everything else in our criminal legal system, capital punishment is arbitrary and racist. Studies have shown that Black people are more likely to be sentenced to death and of the 46 people currently on federal death row, nearly 40 percent of them are Black.

The Trump presidency featured a lot of firsts and historic moments—usually horrific ones—and his excesses with the death penalty were no exception. The overarching message of Biden’s campaign was that he would fix what Trump had broken. But it’s not enough to simply put a Band-Aid on whatever horrors Trump created or exploited—our whole democracy must be shielded against the next such leader. And that’s why there is inherent danger in cautious incrementalism on the death penalty. If the Biden administration leaves the system in place, the next Trump will almost certainly come along and abuse it once again.