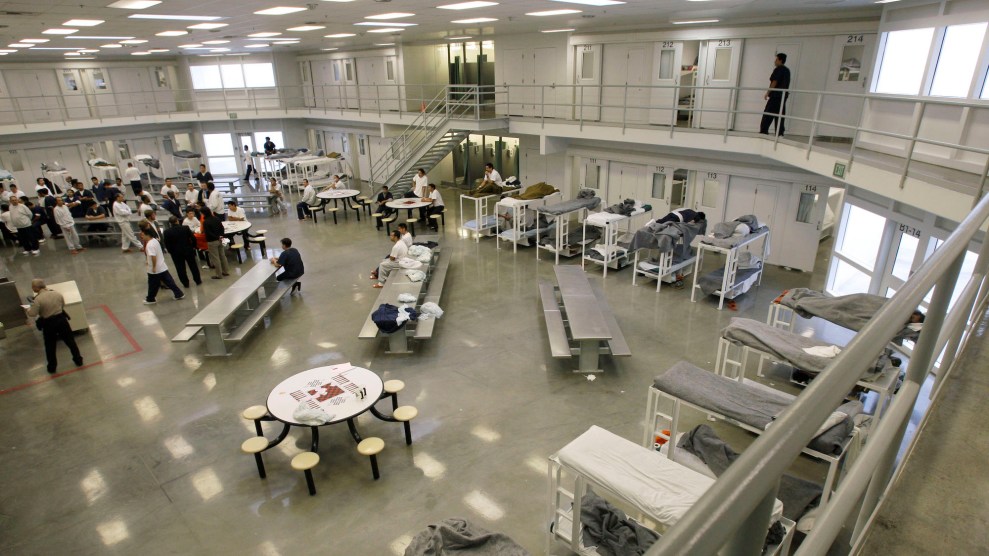 The people locked up in one for-profit immigration detention center are in line for one hell of a raise.

For years, the GEO Group, one of the nation’s largest private prison companies, has been able to keep labor costs low in its Immigration and Customs Enforcement (ICE) detention centers by relying on the people it locks up to do the work. Rather than hiring employees from the surrounding community to cook, clean, and perform maintenance, it enlists detainees for these essential tasks, compensating laborers in its “voluntary work program” with around $1 per day—or, as some detainees have alleged, the promise of extra food. After years of legal challenges to this system, a federal jury decided Wednesday that the company must pay the state’s minimum wage—$13.69 per hour—to the detainees working inside one of its for-profit immigration detention centers.

The lawsuit, brought by Washington State Attorney General Bob Ferguson on behalf of the people in the 1,575-bed Northwest Detention Center in Tacoma, Washington, has the potential to force the GEO Group to pay millions in damages. As I reported in 2017, when Ferguson filed the case:

Ferguson is accusing GEO of violating Washington state’s minimum wage laws, which currently require workers to be paid a minimum of $11 per hour. He claims that by systematically underpaying detainees, GEO profited from illegal activity. While inmates and residents of state, county, or municipal detention centers are exempted from the minimum wage under state law, Ferguson argues that the detainees held in the private, for profit-detention center are not exempt—and that GEO now has to pay up.

The AG wants the court to order GEO to start paying detainee laborers minimum wage moving forward and also to give up “millions in ill-gotten profits” produced by the work scheme since 2005. The funds would likely go into an account “dedicated to supporting people detained in” the Northwest Detention Center, which is the only private immigration detention facility in the state, according to the AG’s office.

“This multi-billion dollar corporation illegally exploited the people it detains to line its own pockets,” Ferguson said in a statement on Wednesday. “Today’s victory sends a clear message: Washington will not tolerate corporations that get rich violating the rights of the people.” The wage law violations span more than 15 years, according to Ferguson’s office.

This is the second trial in the case; the first ended earlier this summer with a deadlocked jury. According to the Seattle Times, during the first trial, GEO said that paying detainees the minimum wage in 2018 would have cost the company $3.4 million. Its profits from the Tacoma detention center that year were $18.6 million.

The case is just one in a string of lawsuits since 2014 that have alleged forced and unpaid or underpaid labor inside ICE detention centers, where thousands of people are locked up nationwide not because they’ve committed a crime, but because they’re waiting for a judge to decide their immigration case—or for ICE to deport them. The “voluntary work program” in which detainees are paid around $1 per day also exists in immigration detention centers run by GEO’s competitor, CoreCivic, which has also faced lawsuits. People inside the CoreCivic-run Steward Detention Center in Georgia, for instance, alleged in a 2018 case that the company compelled them to work by withholding basic necessities like soap and toilet paper, which they then needed to purchase at the commissary using their work program wages. Similarly, detainees in GEO’s detention center in Adelanto, California, said they were threatened with solitary confinement if they refused to clean.

In Washington, detainees told investigators that they needed to work in order to supplement “meager food rations” and to afford payphone rates. Some buffed floors and painted walls through the night in order to earn money to call their family. People at the facility have gone on hunger strike repeatedly in recent years, protesting living conditions, limited access to medical care, and their continued incarceration during the pandemic.

Andrew Free, an attorney involved in the Washington case and many of the other lawsuits, said he expects GEO to appeal the jury’s decision. But the case could have implications for other dollar-a-day cases in which Free says GEO has used similar legal defenses. “Yesterday is the last day that GEO could honestly say that no court in the world had ever found people in this situation eligible for minimum wage,” Free said on Thursday morning, as he prepared to begin the second phase of the trial, which will determine exactly how much the company owes its workers and the state.