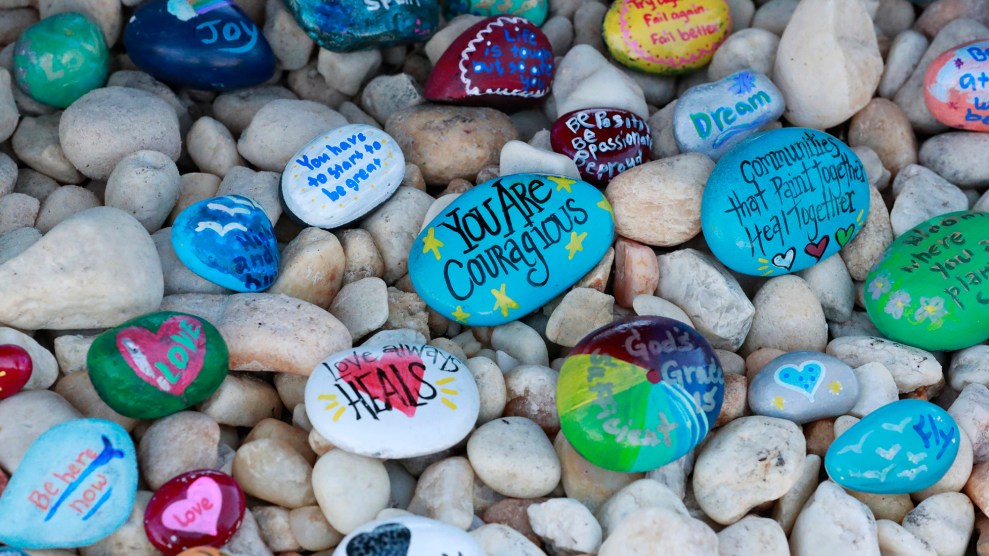 A tribute outside Marjory Stoneman Douglas High School, one year after the mass shootingWilfredo Lee/AP

Fred Guttenberg shared a message and photo on Monday morning from the gravesite of his daughter Jaime, who was shot to death more than three years ago in the Parkland school massacre. “At cemetery with Jaime & reading reports to her of pending guilty plea in the murder trial,” he tweeted. “I want her to know. What I don’t want is to see the name or photo of her murderer.”

Guttenberg called for news media to avoid focussing heavily on the perpetrator and instead highlight the lives of Jaime and the 13 other high school students and three staff members who were fatally shot on February 14, 2018. He echoed a long-running message embraced by various mass-shooting survivors for much of the past decade, beginning with the “no notoriety” movement launched after the mass shooting at a movie theater in Aurora, Colorado, in July 2012.

At cemetery with Jaime & reading reports to her of pending guilty plea in the murder trial. I want her to know. What I don't want is to see the name or photo of her murderer. MEDIA, AS YOU COVER THIS WEEKS NEWS DO NOT USE HIS NAME OR PHOTO. REMEMBER JAIME & 16 OTHER VICTIMS. pic.twitter.com/hqdoec5JrA

Though news outlets covering the Parkland perpetrator’s guilty plea will continue to feature photos of him and make him the prime focus in the traditional mode of courtroom coverage, there is good reason for media to pursue “strategic diminishment,” as I’ve called it—an approach that aims to avoid sensationalism and any further worsening of the copycat effect with school shootings. Parkland was among the numerous cases in recent years that have been marked by offenders’ strong interest in the shooter-saturated media coverage of previous massacres and the opportunity to gain such lasting infamy for themselves.

As the legal process unfolds, Guttenberg is calling for greater attention not only to the 17 lives lost, but also to the many others wounded and traumatized. “People always forget about all of those who survive these shootings and the reality they deal with,” he told me on Tuesday, just ahead of the plea hearing. “My son heard his sister get shot.”

Guttenberg, who published a book last year titled Find the Helpers, a hopeful and forward-looking account about his process of recovery, also spoke of a photo of Jaime snuggling with the family dog, taken the night before she was killed. She was 14 years old. “That’s the last picture I’ll ever take of her because of what happened,” he said. “It’s a picture I look at all the time, the very last image of her.”

The perpetrator, Nikolas Cruz, who is now 23, is expected to plead guilty on Wednesday to 17 counts of premeditated murder and 17 counts of attempted murder. He and his lawyers may be seeking a punishment of life in prison rather than a potential death sentence. According to the New York Times, however, prosecutors have vowed to seek the death penalty and have participated in no plea negotiations in the case. While the trial strategy that the defense intends to use in the coming penalty phase is not yet clear, legal observers see little chance of Cruz avoiding a death penalty case, whether by way of an insanity defense or a pursuit of lesser charges such as second-degree murder. “The odds of that are slim to none, with an emphasis on none,” Ken Padowitz, a defense attorney and former prosecutor, told the South Florida Sun-Sentinel. “The evidence in this case is so public and so overwhelming that it’s insurmountable.”

“No matter what happens,” Guttenberg told me, “I still want him to pay the ultimate penalty.”

Other survivor families share that view of the defendant’s fate. “He took my son’s life and he tried to murder my other son. I’d like to see him on death row,” Mitchell Dworet told the Times, referring to his son Nicholas, who died, and another son, Alex, who was wounded in the attack.

It’s likely that Cruz’s guilty plea will result in a less lengthy trial, as the jury would proceed directly to the penalty phase. That could ultimately reduce the duration and cost of the proceedings. Mass shooting cases, in addition to being emotionally grueling, tend to be exorbitantly expensive, subject to long delays and massive amounts of evidence and testimony. Three years after the Aurora movie theater massacre, for example, the cost of legal proceedings reached $5.5 million before the trial even got underway, including expenses related to the pool of 9,000 prospective jurors called for the case.

Whatever the scope of the further legal proceedings to come in Florida, it won’t ultimately change Guttenberg’s perspective, he says. Nor does he see anything redeeming in the guilty plea finally arriving now. “For three and a half years, the 17 families have watched these status hearings, especially through Covid, with horrific frustration,” he says. “Three and a half years of insane delay tactics from the defense team. They could have done this long ago, and they didn’t do it. They get no grace from me.”