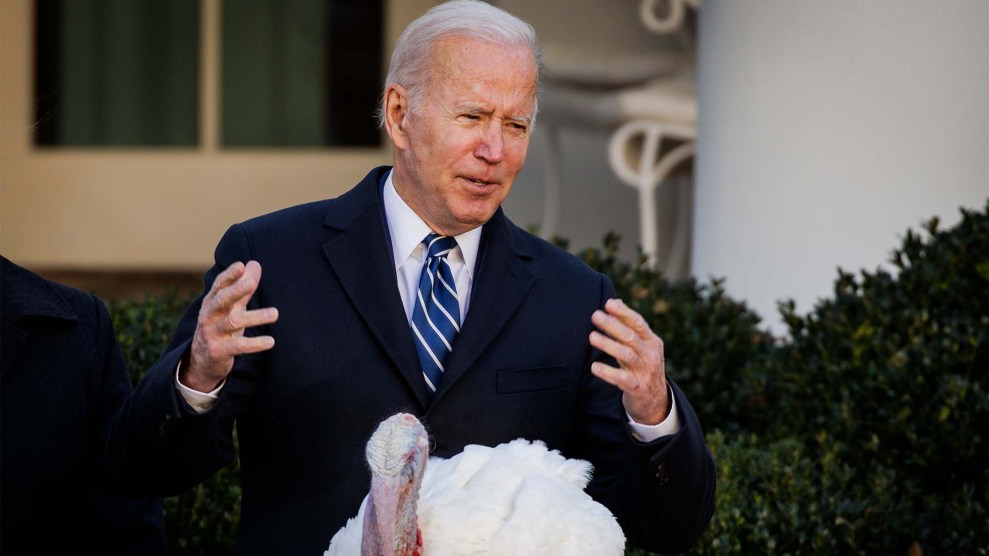 President Biden began the holiday season on Friday with the annual turkey pardon, a silly, decades-long ritual that almost always gets some media coverage ahead of Thanksgiving and gives the president a chance to pose for a photo-op and make cheesy jokes about cutely named birds.

Standing in the Rose Garden, Biden joked that this year’s turkeys, Peanut Butter and Jelly, had been picked for a pardon partly because of their vaccination status. “Instead of getting basted, these two turkeys are getting boosted!” he said.

But the event also took a cringe-worthy turn, at least for some who follow criminal justice reform, when a New York Post reporter asked the president a question about his power to grant pardons and commutations to federal prisoners, many of whom have faced risk to their health as the coronavirus spread quickly behind bars. “Will you be pardoning any people in addition to turkeys?” the reporter said to Biden as the president made his way toward the White House.

Biden, in his aviator sunglasses, largely brushed off the question, pointing back at the reporter and responding with yet another joke. “Are you—you need a pardon?” he asked lightheartedly. It’s “just turkeys,” he added.

It was a short, playful exchange as part of a short, playful White House ritual. But for millions of Americans who have been locked behind bars or seen their family members imprisoned, disproportionately people of color, Biden’s comments and the turkey pardoning ritual itself could also come across as tone-deaf. That’s especially true given Biden’s history with helping to write some of the nation’s harshest drug laws as a US senator, and in light of his promise ahead of the 2020 election to help free people who are now serving time as a result of those laws.

As of this summer, more than half a million people had been infected with the coronavirus in federal and state prisons, according to the Marshall Project.

“I think we should decriminalize marijuana, period,” he said at a 2019 debate, during the Democratic presidential primary. “And I think everyone—anyone who has a record—should be let out of jail, their records expunged, be completely zeroed out.” Yet, 10 months into his presidential term, the country’s federal prison population has been growing and Biden has yet to grant a pardon to a single person. This weekend, some activists planned to rally outside the White House in protest. “We want the Biden administration to honor their promise on the campaign trail to free all cannabis prisoners,” Amy Povah, founder of the CAN-DO Foundation, which fights for the release of incarcerated drug offenders, told the New York Post. She pointed out that nearly 18,000 clemency petitions are currently pending for Biden to review, including for some people serving life sentences without parole because of marijuana crimes.

Though Biden is certainly not the first president to delay using his clemency powers, he holds office in a context that requires more urgency, according to Mark Osler, a law professor at the University of St. Thomas Law School in Minneapolis who wrote about the problem for the StarTribune. The backlog of 18,000 clemency petitions that Biden faces far exceeds the backlog of 2,000 that Barack Obama encountered at the start of his administration, and many of the petitions have sat for several years.

As of this summer, more than half a million people had been infected with the coronavirus in federal and state prisons, according to the Marshall Project. Of those, more than 2,700 incarcerated people died. Making matters worse, thousands of people who were released from federal prisons during the pandemic may be forced to return behind bars once it’s over, unless Biden uses his clemency powers to keep them free. Almost all of them have lived safely in their communities since their release, not committing any further crimes.

This year’s turkey pardon also came with awkward timing: Biden held his photo-op with Peanut Butter and Jelly on the same day that Kyle Rittenhouse was acquitted of murder charges in Wisconsin, leading to protests around the country about a criminal justice system that routinely treats white defendants like Rittenhouse more leniently than Black and brown defendants. (Last year, the timing of the ritual wasn’t great either; Donald Trump pardoned his Thanksgiving turkeys as the Justice Department was rushing to execute as many people on death row as possible during his last few weeks in office.)

On Friday, White House press secretary Jen Psaki hinted that Biden planned to eventually use his pardon powers, but she declined to say when.  “[T]he president is of course looking to use his clemency powers. He’s talked about his approach or his view on nonviolent drug offenders,” she said, according to the New York Post. “But I don’t have anything to update you on, on that today.”

Biden told his audience that the turkey pardon tradition was important, and that everyone should feel lucky to celebrate Thanksgiving with their family members. “It reminds us to have fun and always be grateful,” he said.

What Biden also underscored, however unintentionally, was how many people are still stuck behind bars, unjustly able to do the same.