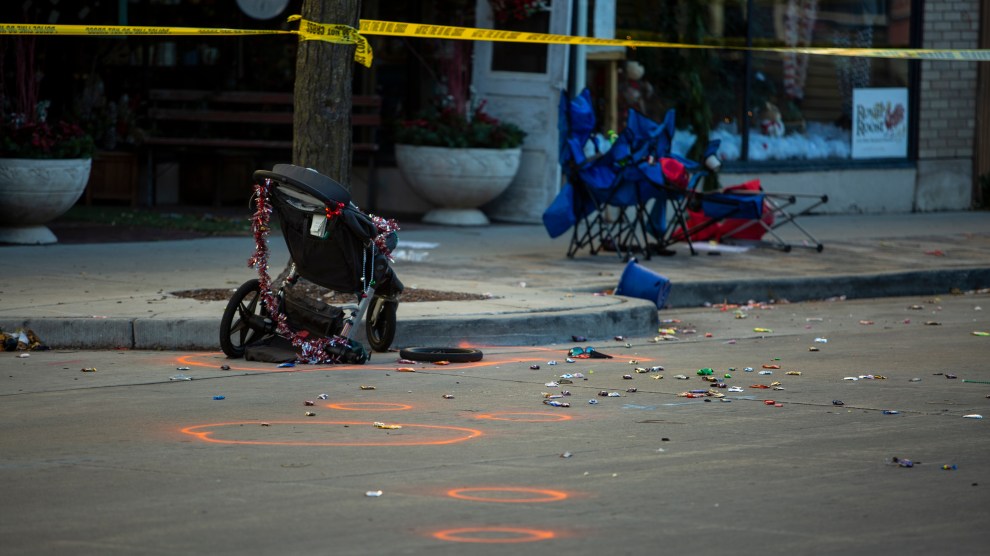 Further details came into view Monday about the horrific mass attack in Waukesha, Wisconsin, where the driver of a red SUV barreled through a crowd of people participating in a Christmas parade late on Sunday. The attack killed at least five and injured at least 48 others. The casualties included more than a dozen children, with the total number of injured and dead likely to rise as some victims remained in critical condition.

The sole suspect in the attack, a 39-year-old man with a lengthy criminal record including violent and abusive behavior, was in custody Monday, according to reporting from the Milwaukee Journal Sentinel:

Darrell Brooks Jr., the man suspected of being the driver, has been charged three times in less than two years with recklessly endangering the safety of others, most recently on Nov. 5 as part of a domestic abuse incident for which he was also charged with resisting or obstructing an officer.

In the most recent case, a woman told police Brooks purposefully ran her “over with his vehicle” while she was walking through a gas station parking lot after he had followed her there after a fight, according to the criminal complaint. The woman was hospitalized for her injuries, court records show.

At a press conference on Monday, Waukesha police chief Daniel Thompson revealed that Brooks had fled the scene of a reported domestic disturbance just prior to the mass attack. Police had yet to investigate that incident, Thompson said, when they were called away to respond to the mayhem at the parade. According to Thompson, authorities were “confident” the suspect acted alone and they saw “no evidence that this is a terrorist incident.”

America is accustomed to mass casualty events involving guns, an epidemic I explore in my forthcoming book, Trigger Points. But attacks using vehicles are not unheard of. Once predominantly a tool of international terrorism, vehicular attacks have been on the rise in recent years in other domestic contexts, including violent political unrest.

Ever since a neo-Nazi plowed a car into a group of peaceful protesters in Charlottesville, Virginia, in 2017, national security and behavioral threat assessment experts have worried about an increase in these kinds of attacks. As one senior federal law enforcement official told me, in addition to those that have occurred in recent years, the prospect of attacks using cars and trucks has come up more frequently in investigations of threats and plots that have been disrupted.

One theory experts are looking into is that the use of vehicles for mass attacks has gained traction as part of the so-called copycat problem. “The idea of a vehicular attack is certainly more on the radar now for some individuals who may be planning violence,” another law enforcement source who has studied the problem told me.

The Waukesha suspect’s motive or intent, and whether his attack was planned or spontaneous, remained largely unclear as of late Monday. But Brooks’ lengthy record of domestic violence, as reported by multiple news outlets citing court records, may also be noteworthy. Misogyny and domestic abuse have been significant factors in public mass shootings in recent years, as we detailed in a Mother Jones investigation in 2019:

Based on case documents, media reports, and interviews with mental health and law enforcement experts, we found that in at least 22 mass shootings since 2011—more than a third of the public attacks over the past eight years—the perpetrators had a history of domestic violence, specifically targeted women, or had stalked and harassed women. These cases included the large-scale massacres at an Orlando nightclub in 2016 and a church in Sutherland Springs, Texas, in 2017. In total, they account for 175 victims killed and 158 others injured.

Authorities said on Monday that they believed Brooks’ attack on the parade was intentional. During an afternoon press conference, an emotional chief Thompson read the names of some victims, some of whom were members of the Milwaukee Dancing Grannies group that participated in the parade: Virginia Sorenson, 79; LeAnna Owen, 71; Tamara Durand, 52; Jane Kulich, 52; and Wilhelm Hospel, 81. Further details on victims of the attack, as young as age 3, are here.

Update: On Tuesday, prosecutors said during a court hearing for Brooks that a sixth person, a child, had died. They also revealed that more than 60 people were injured in the disaster.

This story has been updated with information on casualties as of 2:30 p.m. PT on Tuesday.