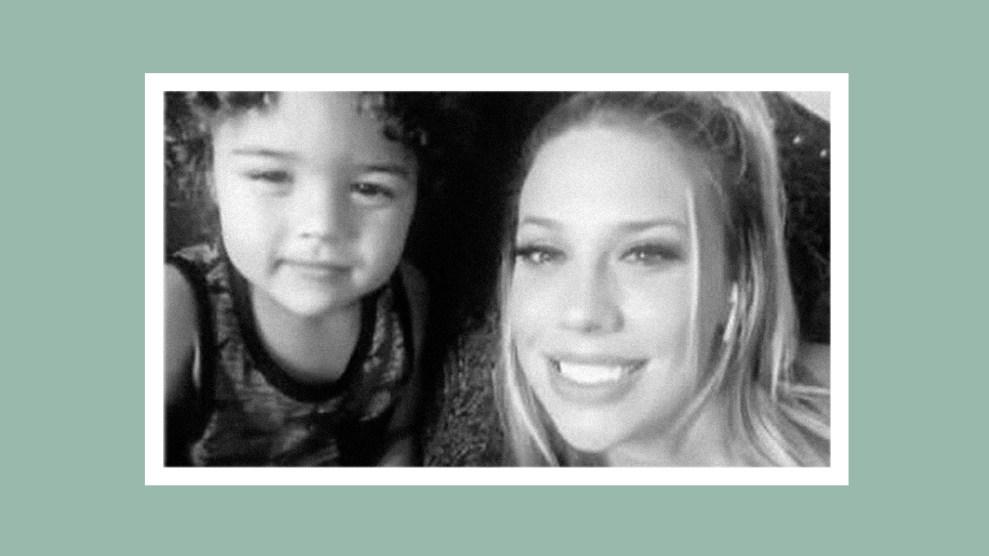 After working a long New Year’s Eve shift at the end of 2019, Rebecca Hogue, then a 28-year-old cocktail waitress, arrived home in Norman, Oklahoma, around 4 a.m. and went to check on her 2-year-old son. During work, she’d left Ryder with her boyfriend, Christopher Trent, who had put him to bed in his crib, where he appeared to be sleeping. Hogue turned in for the night.

But when she woke up again a few hours later, Trent was gone. And her toddler, still in the crib, was no longer breathing. Panicked, she called 911: “Oh my God. He’s cold,” she told the operator. The boy was dead.

The police began searching for Trent, whom they suspected of murder. Days later, they found him hanging from a tree in the Wichita Mountain Wildlife Refuge, where he’d killed himself. Law enforcement believed he’d beaten the boy while Hogue was away at work that night. At the scene of his suicide, they found the words “Rebecca is Innocent” carved into a tree.

Everyone who investigated the case agreed that Hogue did not kill her son or participate in the abuse. She hadn’t even been home at the time of the violence. But in the ultimate act of victim-blaming against a grieving mother, the state of Oklahoma decided to punish her for her son’s death: In November, Hogue was convicted of first-degree murder, even though she never laid a hand on the boy. At a sentencing hearing on Friday, a judge will decide whether to send her to prison for life, as the jury recommended.

How is that possible? Hogue was convicted under Oklahoma’s “failure to protect” law, which requires parents to shield their kid from physical harm if they’re aware, or should have been aware, that another adult is abusing the child. The law was passed about two decades ago with the goal of preventing child abuse, as lawmakers around the country enacted tough-on-crime bills that fueled mass incarceration. Almost all states have similar laws or legal theories that criminalize caregivers who “enable” or “permit” a child’s injuries, even when they tried to stop the violence.

But attorneys who study these cases say there’s no evidence that these types of laws actually keep kids safe. Instead, they often lead to the incarceration of moms who never committed any violence and were unable—often for reasons outside their control—to get help for their children. Some of these women were themselves victims of domestic violence. Others, like Hogue, say they didn’t know the abuse was happening, according to Karla Fischer, an attorney and expert witness in Illinois who has assisted the legal defense for women in dozens of failure-to-protect cases around the country. “All of them did not know their child was as badly hurt as the child was hurt,” she says of her former clients. But “by and large, the reaction is, ‘Who cares? A child is dead. Let’s put her in prison for the rest of her life.'”

Attorneys who study these cases say there’s no evidence that these types of laws actually keep kids safe.

Theoretically, both mothers and fathers can face charges under these statutes, but attorneys who study these cases say that it’s usually women who are taken to court, often because of unrealistic expectations that mothers should be able to protect their children no matter what. In an interview with the Norman Transcript, which has documented Hogue’s case since the beginning, Oklahoma County public defender Ryan Sullivan described the law as “draconian” and “sexist.”

Cleveland County District Attorney Greg Mashburn, whose office prosecuted Hogue, put it this way: “If you enable the abuse of a child, basically you failed to protect that child,” he told the Transcript. “You are just as guilty as the actual person” who committed the abuse.

Over the last decade, hundreds of mothers have been prosecuted for similar charges in Oklahoma, according to a Mother Jones analysis of court records. Some of them have received longer prison sentences than the men who actually committed the abuse.

After her son’s death, Hogue cooperated with law enforcement while they searched for her boyfriend, Trent. She told them she’d seen no warning signs to indicate that he’d been harming her child. Before meeting Trent, she’d been with other boyfriends who abused her, but Trent seemed different, gentler. And when she started noticing bruises on her son or that the boy seemed lethargic, Trent always brushed it off or had an explanation that seemed to make sense. “I’m really mad at myself,” Hogue told detectives during an interview following her son’s death, according to the Transcript. “I believed him when [Trent] said he must’ve fallen or had the flu.”

Some of the investigators felt sympathy for Hogue. In fact, Norman Police Department Detective Sean Judy, who led the investigation, stated before the trial that he did not believe she committed a crime. In a recorded conversation, he and another detective referred to her arrest as a “bullshit case.” They did not want to press charges, but the district attorney’s office proceeded anyway, arguing that Hogue must have known about or suspected the abuse.

Fischer, the attorney in Illinois, believes some prosecutors go hard against women in these cases because of political pressure. The thinking is, she says, “‘Don’t let people who let their children be killed get away.'” Prosecutors who are up for reelection don’t want to be judged for “looking like they are excusing child abuse,” adds Colby Lenz, who leads the advocacy group Survived & Punished in California, which tries to help women experiencing domestic violence.

During the trial, jurors were not allowed to see some evidence that might have helped Hogue. Judge Michael Tupper prevented them from hearing the recording of Detective Judy expressing skepticism about her guilt. The judge also prevented them from seeing the image of the tree carving at the Wichita Mountain Wildlife Refuge, the one that said “Rebecca is Innocent,” a message that the judge said would have constituted hearsay from Trent. And the judge prevented a domestic violence expert from testifying on Hogue’s behalf.

Prosecutors who are up for reelection don’t want to be judged for “looking like they are excusing child abuse.”

After the jury convicted Hogue, they recommended life in prison with the possibility of parole. But the judge won’t decide her sentence until Friday. After Hogue heard the jury’s recommendation, Hogue’s attorney Andrew Casey apologized to her as she was handcuffed and taken back to the jail, where officers put her in solitary confinement for several weeks because of the high-profile nature of her case. “We were utterly floored by the jury’s decision,” says Stacey Wright, an activist in Norman who began following failure-to-protect cases after starting a group that helps women who experienced sexual assault. “She shouldn’t have been charged. It’s absolutely unconscionable.”

During solitary confinement this winter, Hogue spent about 23 hours a day inside her cell, with just a short break to shower or use the phone. Now she’s in the jail’s general population unit, but she hasn’t been allowed to step outside in three months for fresh air or sunlight.

“I feel like I’m in so much pain here; it can’t be contained in this room,” she told me during a video call from the jail this week, standing in her orange jumpsuit near a white wall, the phone pressed against her ear as other incarcerated women moved around her. She regularly started crying as we spoke, trying her best to wipe away her tears and keep her voice steady. “I have to just stifle it in here. I feel like I’ve had no time to grieve.” She’s not able to see visitors in person, to get a hug. She’s on antidepressants, but it’s hard to mourn her son’s death because the jail doesn’t offer counseling services.

In January, investigators for the Oklahoma Department of Corrections reviewed Hogue’s case and sent the court a sentencing recommendation that diverged from the jury’s. As part a report they file before a judge decides a punishment for a defendant, the investigators said they did not believe Hogue should spend time in prison because she was not a threat to the community. “Hogue appears to be struggling mentally and…it appears Hogue would benefit more from a longterm residential treatment facility to target her mental health, grief and trauma,” the report stated. It also suggested that she should serve probation after her release from a treatment facility. The investigators described Hogue as “remorseful” and said she “appears to be emotionally distraught” and “to be going through grief.”

But ultimately, it will be up to the judge to decide her sentence on Friday. The possibility remains that she will be sent to prison for life. “It’s just been hard for her to hold on to any hope,” says Wright, the activist, who talks to Hogue regularly.

Hogue keeps photos of her son in the Bible she sleeps beside in jail every night. In one of her favorite images, he’s dressed in his Halloween costume: a little fly with wings and big bug eyes. “He had a sense of humor,” she told me. She began to cry on the phone as she remembered how much he loved cars and dump trucks and dinosaurs. “I would never allow anyone to hurt my child,” she said.

“Sometimes I wonder if this is a dream,” she added, “because I remember being with my child, feeding him in a high chair, him watching cartoons. It’s just unreal.” She wiped away a tear. “I’m just in so much pain.”

Update, February 11: During the sentencing hearing, Judge Michael Tupper stated that Hogue was not a “danger to society,” but he still sentenced her to 16 months in prison—one month for every year that she would have been legally responsible for her son. With time served, she will spend 13 more months behind bars on top of the three months she has already spent in jail since her conviction.