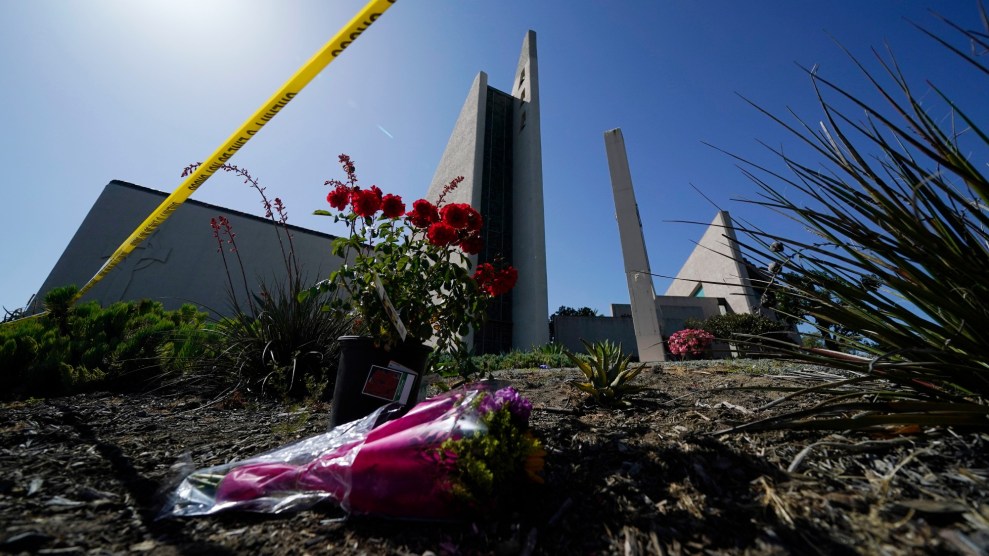 After a gunman attacked a Taiwanese Presbyterian church in Laguna Woods, California, misinformation spread about the shooter's ethnic background.Ashley Landis/AP

After a gunman fired on six people at a Taiwanese Presbyterian church in Laguna Woods, California, last Sunday, killing one and injuring five, the news of a likely hate crime ricocheted across Chinese-language group chats and the Taiwanese press. Hate crimes against Asian Americans have sharply increased since the start of the pandemic, according to the Center for the Study of Hate & Extremism at California State University, San Bernardino, and it seemed possible that this was another example of that phenomenon.

But the shooting quickly grew complicated in other ways relating to the ethnicity of the shooter and a possible motive that relates to political tensions between mainland China and the island of Taiwan.

In the initial aftermath, Orange County Sheriff Don Barnes identified the suspect, 68-year-old David Chou, as a native of mainland China who “specifically targeted the Taiwanese community.” Many of the members of Geneva Presbyterian Church in Laguna Woods are “elderly Taiwanese immigrants,” the Los Angeles Times reported. That bit of news gained traction in outlets like the Associated Press, which described Chou as a “Chinese immigrant motivated by hate for Taiwanese,” an angle that was further amplified in Apple Daily Taiwan, an online media outlet. At a time of increasing tensions between China and the United States, who have often clashed over US support for Taiwan, the shooting appeared to be a local microcosm of Chinese aggression toward Taiwan.

But those early reports turned out to be incorrect. Chou, the Taiwanese press later found, was born on the island to Chinese parents who had fled the mainland after the Chinese Communist Party took power in 1949. His writings and people who knew him suggest that Chou strongly supports the reunification of Taiwan and China and was hostile to the predominant view among many Taiwanese that the island should retain a cultural and political identity that is distinct from the mainland. (Though the Chinese government still treats Taiwan as a breakaway province, the self-governing island has been de facto independent since 1949.)

In April 2019, Chou was photographed in Las Vegas attending an event organized by a group that supports the reunification of Taiwan and mainland China. While at the event, he is seen in front of a banner praising the populist Taiwanese politician Han Kuo-yu. “I spoke to Chou twice, but I found his thoughts too radical and kept a distance afterwards,” Jenny Koo, the organization’s chair, told Vice. “Since the latter half of 2019, he did not participate in any of our activities and was no longer a member.”

NBC News spoke with members of the Taiwanese Association of Las Vegas, where Chou had attended several meetings, and reported that he frequently challenged the prevailing, pro-independence tenor of the group. “Chou grabbed the microphone at a 2020 seminar and, at one point, proclaimed, ‘We are all Chinese,'” the wife of one of Chou’s acquaintances told NBC News.

Before heading to Laguna Woods, Chou sent his writings, titled “Journal of the Independence-eliminating Angel,” to World Journal, a popular Chinese-language newspaper in the United States that generally supports closer ties between Taiwan and China. It is not yet clear why he attacked members of that particular church—and various Taiwan experts with whom I spoke had heard different motives, including some nonpolitical ones—but the Presbyterian Church in Taiwan has for decades supported Taiwanese self-determination, which runs contrary to Chou’s rabidly pro-unification views.

Whatever his motivation, Chou “was affiliating himself with certain organizations that have a very particular toxic, nationalist stance on cross-strait relations, especially on the pro-independence movement in Taiwan,” Jessica Drun, nonresident fellow in the Atlantic Council’s Global China Hub, told me. Taiwanese political leaders have issued some restrained comments on the shooting, but have not drawn attention to Chou’s views.

Chou’s politics and the early reports that he was a mainlander led to some conspiracy theories that he was acting on behalf of China’s United Front, a Communist Party influence operation aimed at countering overseas enemies to the Chinese regime. But to Brian Hioe, a Taiwanese-American journalist who has followed the media coverage of the Laguna Woods shooting, that kind of violent action seems unlikely. “It proves hard to imagine that China’s United Front would think that the cause of unification could be advanced by gunning down a defenseless church delegation,” Hioe wrote. “In fact, Chou’s actions actually seem more characteristic of American gun culture, and America’s culture of mass shootings.”

There does not appear to be some grand conspiracy at work. Chou’s attack, much like the deadly shooting in Buffalo, is something more frighteningly routine: a set of poisonous ideas fueling an act of hate.

This piece has been updated to more clearly characterize Chou’s apparent political motive.