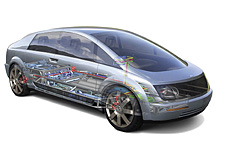 When President Bush unveiled his plans for a hydrogen-powered car in his State of the Union address in January, he proposed $1.2 billion in spending to develop a revolutionary automobile that will be “pollution-free.” The new vehicle, he declared, will rely on “a simple chemical reaction between hydrogen and oxygen” to power a car “producing only water, not exhaust fumes.” Within 20 years, the president vowed, fuel-cell cars will “make our air significantly cleaner, and our country much less dependent on foreign sources of oil.”

By launching an ambitious program to develop what he calls the “Freedom Car,” Bush seemed determined to realize the kind of future that hydrogen-car supporters have envisioned for years. Using existing technology, hydrogen can be easily and cleanly extracted from water. Electricity generated by solar panels and wind turbines is used to split the water’s hydrogen atoms from its oxygen atoms. The hydrogen is then recombined with oxygen in fuel cells, where it releases electrons that drive an electric motor in a car. What Bush didn’t reveal in his nationwide address, however, is that his administration has been working quietly to ensure that the system used to produce hydrogen will be as fossil fuel-dependent — and potentially as dirty — as the one that fuels today’s SUVs. According to the administration’s National Hydrogen Energy Roadmap, drafted last year in concert with the energy industry, up to 90 percent of all hydrogen will be refined from oil, natural gas, and other fossil fuels — in a process using energy generated by burning oil, coal, and natural gas. The remaining 10 percent will be cracked from water using nuclear energy.

Such a system, experts say, would effectively eliminate most of the benefits offered by hydrogen. Although the fuel-cell cars themselves may emit nothing but water vapor, the process of producing the fuel cells from hydrocarbons will continue America’s dependence on fossil fuels and leave behind carbon dioxide, the primary cause of global warming.

Mike Nicklas, chair of the American Solar Energy Society, was one of 224 energy experts invited by the Department of Energy to develop the government’s Roadmap last spring. The sessions, environmentalists quickly discovered, were dominated by representatives from the oil, coal, and nuclear industries. “All the emphasis was on how the process would benefit traditional energy industries,” recalls Nicklas, who sat on a committee chaired by an executive from ChevronTexaco. “The whole meeting had been staged to get a particular result, which was a plan to extract hydrogen from fossil fuels and not from renewables.” The plan does not call for a single ounce of hydrogen to come from power generated by the sun or the wind, concluding that such technologies “need further development for hydrogen production to be more cost competitive.”

But instead of investing in developing those sources, the budget that Bush submitted to Congress pays scant attention to renewable methods of producing hydrogen. More than half of all hydrogen funding is earmarked for automakers and the energy industry. Under the president’s plan, more than $22 million of hydrogen research for 2004 will be devoted to coal, nuclear power, and natural gas, compared with $17 million for renewable sources. Overall funding for renewable research and energy conservation, meanwhile, will be slashed by more than $86 million. “Cutting R&D for renewable sources and replacing them with fossil and nuclear doesn’t make for a sustainable approach,” says Jason Mark, director of the clean vehicles program for the Union of Concerned Scientists.

The oil and chemical industries already produce 9 million tons of hydrogen each year, most of it from natural gas, and transport it through hundreds of miles of pipelines to fuel the space shuttle and to remove sulfur from petroleum refineries. The administration’s plan lays the groundwork to expand that infrastructure — guaranteeing that oil and gas companies will profit from any transition to hydrogen. Lauren Segal, general manager of hydrogen development for BP, puts it succinctly: “We view hydrogen as a way to really grow our natural-gas business.”

To protect its fuel franchise, the energy industry has moved swiftly in recent years to shape government policy toward hydrogen. In 1999, oil companies and automakers began attending the meetings of an obscure group called the National Hydrogen Association. Founded in 1989 by scientists from government labs and universities, the association was a haven for many of the small companies — fuel-cell designers, electrolyzer makers — that were dabbling in hydrogen power. The group promoted the use of hydrogen but was careful not to take any position on who would make the fuel or how.

All that changed once the energy industry got involved. “All of a sudden Shell joined our board, and then the interest grew very quickly,” says Karen Miller, the association’s vice president. “Our chair last year was from BP; this year our chair is from ChevronTexaco.” The companies quickly began to use the association as a platform to lobby for more federal funding for research, and to push the government to emphasize fossil fuels in the national energy plan for hydrogen. Along with the big automakers, energy companies also formed a consortium called the International Hydrogen Infrastructure Group to monitor federal officials charged with developing fuel cells. “Basically,” says Neil Rossmeissl, a hydrogen standards expert at the Department of Energy, “what they do is look over our shoulder at doe to make sure we are doing what they think is the right thing.”

As hydrogen gained momentum, the oil companies rushed to buy up interests in technology companies developing ways to refine and store the new fuel. Texaco has invested $82 million in a firm called Energy Conversion Devices, and Shell now owns half of Hydrogen Source. BP, Chevron-Texaco, ExxonMobil, Ford, and General Electric have also locked up the services of many of America’s top energy scientists, devoting more than $270 million to hydrogen research at MIT, Princeton, and Stanford.

Such funding will help ensure that oil and gas producers continue to profit even if automakers manage to put millions of fuel-cell cars on the road. “The major energy companies have several hundred billions of dollars, at the least, invested in their businesses, and there is a real interest in keeping and utilizing that infrastructure in the future,” says Frank Ingriselli, former president of Texaco Technology Ventures. “And these companies certainly have the balance sheets and wherewithal to make it happen.”

The stakes in the current battle over hydrogen are high. Devoting the bulk of federal research funding to making hydrogen from fossil fuels rather than water will enable oil and gas companies to provide lower-priced hydrogen. That, in turn, means that pipelines built to transport hydrogen will stretch to, say, a BP gas field in Canada, rather than an independent wind farm in North Dakota. Even if the rest of the world switches to hydrogen manufactured from water, says Nicklas, “Americans may end up dependent on fossil fuels for generations.”

The administration’s plans to manufacture hydrogen from fossil fuels could also contribute to global warming by leaving behind carbon dioxide. Oil and coal companies insist they will be able to “sequester” the carbon permanently by pumping it deep into the ocean or underground. But the doe calls such approaches “very high risk,” and no one knows how much that would cost, how much other environmental disruption that might cause, or whether that would actually work. “Which path we take will have a huge effect one way or the other on the total amount of carbon pumped into the atmosphere over the next century,” says James MacKenzie, a physicist with the World Resources Institute.

Even if industry manages to safely contain the carbon left behind, the Bush administration’s plan to extract hydrogen from fossil fuels will wind up wasting energy. John Heywood, director of MIT’s Sloan Automotive Lab, says a system that extracts hydrogen from oil and natural gas and stores it in fuel cells would actually be no more energy efficient than America’s present gasoline- based system.

“If the hydrogen does not come from renewable sources,” Heywood says, “then it is simply not worth doing, environmentally or economically.”