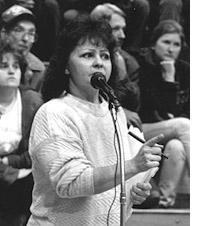 Julia Bonds is Appalachian through and through. The daughter of a coal miner, she was born and raised in the mountains of West Virginia. Specifically, Bonds was raised in Marfork Hollow, where six generations of her family had lived. But Bonds doesn’t live in Marfork Hollow any more.

Over the past two decades, the Appalachian coal country has been transformed, ravaged by the practice known as mountaintop removal mining. The process relies on reaching narrow coal seams by literally blasting the tops off mountains. The coal is then collected through the use of drag-lines, massive buckets attached to cables which collect huge amounts of dirt and small amounts of coal.

Mountaintop removal is a cheap way for mine companies to get at the narrow bands of coal which run through West Virginia’s mountains. But the residents of Appalachia are paying the price. The mountains aren’t the only things being torn apart. Two years ago, Bonds and her family became the last to evacuate Marfork Hollow. The town had been turned into a wasteland by nearby mountaintop removal operations. And Bonds is not alone. Mountaintop removal mining and its devastating side-effects — water pollution, air pollution, blasting, flooding — have driven thousands of Appalachians from their homes.

Bonds, 50, is also the definition of a home-grown activist. The former waitress and convenience store clerk is now director of Coal River Mountain Watch, a grass-roots organization run from a storefront office in Whitesville, West Virginia. From that office, Bonds is organizing concerned local residents and faith groups to challenge the entrenched emperors of Appalachia: The coal companies.

In April, Bonds was named as one of six recipients of the Goldman Prize. Referred to as a Nobel Prize for activism, the $125,000 prize is awarded each year to “environmental heroes” by the San Francisco-based Goldman Environmental Foundation. Bonds often describes the goal of her activism as “getting the secret out.” Now, her story is being told on National Public Radio, and her showdown with the Richmond, Virginia-based Massey Energy Co. is being covered by The Washington Post.

The secret is out.

MotherJones.com: Any thoughts on receiving the Goldman Prize?

Julia Bonds: The prize is the result of a collective effort. It’s been amazing to watch people who’ve been oppressed stand up for their rights.

The Prize means that we can expose this secret of what’s been going on in the coalfields of Appalachia.

MJ.com: What is that secret? Why has it been kept a secret?

JB: The people of Appalachia have been used and abused by mountain top removal mining. Appalachia is the sacrifice zone for America’s so-called cheap energy. But it’s not cheap. It costs a lot to clean up the messes of the coal companies.

There’s no such thing as cheap energy. That’s what people need to understandÉ We are using up all of our children’s resources. We’re using up all our children’s coal, all their oil, and in the process we’re polluting their land and their water and their air. We need to understand that cleaning up Appalachian tragedies — such as the flooding and the contamination — will be paid for by American taxpayers. Meanwhile, that false efficiency is wiping out mountain heritage, destroying ancient mountains. It’s destroying whole communities in Appalachia.

MJ.com: Why do you think it is that so little national attention has been paid to the damaging effects of mountain top mining, or to your collective effort to fight it?

People might think Appalachians are backwards, but only a stupid person dumps fill into clean water. The Appalachian forest is the lungs of the east coast.

MJ.com: Other than that, why should the rest of America be concerned by what’s happening in Appalachia?

A 1977 ruling by Judge Charles Hayden stated that you cannot dump waste into nearby streams unless you put something back of economic benefit to the community.

In October 2000, in Charleston, Kentucky, there was a 250 million gallon sludge spill that contaminated 3 watersheds, and the land surrounding the watersheds (The 300-Million-Gallon Warning, Mother Jones, March/April, 2002). The people in that part of Kentucky can’t use their land now to farm, and that’s basically how the people sustain themselves in Appalachia, by farming.

And, like I said, today it’s me, tomorrow it’s you.

MJ.com: How did you come to activism?

JB: I just went to a rally, and then a meeting. There were 6 people at the meeting, and 250 at the rally. At the rally there was a conservation-through-aviation group that flies people all over the mountains of West Virginia to show them the destruction from above. You don’t really understand the devastation until you see it from above.

MJ.com: The coal business, of course, is the economy in much of the region. How are you addressing concerns that, by opposing the coal companies, you’re threatening to take jobs away?

JB: We say we’re against irresponsible mining. We don’t think there’s any responsible way to mine coal by mountain top removal. We try to explain to [the community] that, essentially, we’re losing jobs because of the machinery they use to do surface mining.

We need a tax base outside of mountain-top removal. Because it destroys more jobs than it creates. I think we could make use of a clean water supply, there are so many streams here, we could bottle water. Its so beautiful here. The mountains cradle you and beckon you and you feel very safe and protected I think tourism and world class drinking water could be our economy.

Our culture is based on our connection to the mountains — like harvesting morels (though we call em molly moochers). Half the world’s ginseng is harvested in the Appalachian Mountains. We still hunt and fish and live on subsistence farming.

Still, the poorest people live in the coal rich part of West Virgina. We’re the poorest people in the poorest state in the richest nation. Our streets should be lined with gold, because of the resources we have, but all that money goes out of state to CEO’s and stockholders.

JB: We understand there’s danger in this, but we don’t dwell on it.

The key is to get the word out, to find a venue to get the secret out. The coal miners think other people don’t care what happens to us, to our communities,

That’s how the coal industry wants us to feel. That’s how they’ve oppressed us for so many years. They made us feel like second class citizens.

MJ.com: And that mindset has been hard to break through.

JB: Absolutely. We re-enacted the Blair Mountain March, which was a turning point in the formation of the miners’ union. During it, some Logan County elected officials and union workers attacked us (Egging Mother, Mother Jones, November/December, 1999). It was full circle. During the original battle of Blair Mountain it was the Logan County officials that attacked the miners.

MJ.com: When you say attacked, what do you mean?

JB: We noticed group of men, and they told us to turn around, go back. I can’t say the words they said — they used a lot of curse words. They told us, “we’re telling you to turn around and go back.”

Ken Heckler, he was the Secretary of State at that time, was leading our march, and he told us, “walk don’t talk.” And we kept walking. Then they regrouped. I heard men yelling, “Get in front of em, get in front of em!” and they formed another line. And they became violent.

A neighbor called the police and thank God they arrived when they did, or someone might have seriously been hurt.

But there were a lot of nice people along the way that really appreciated us. I’ll never forget, one day as we got close to Blair Mountain, there was a man sitting beside the road in Logan County. He had a piece of wood and he was whittling and waiting on us to come by. And over his house there was a huge dragline. And he sat there and he waited for us to come by, to talk to us. And he had quite a great conversation with us. He said he’d been sitting there for two hours waiting for us.

JB: Yes, we have, mostly just in educating ourselves as to what our options are. All these years we’ve elected officials that we thought were looking out for us, and we found out that they were looking out for their own interests. So much campaign money comes from the coal industry in this state É our politicians are bought and paid for.

My people have been asleep for a very long time. They have believed the stereotypes of themselves. We knew we weren’t stupid people, but we couldn’t break the mold of that stereotype, we couldn’t rise up above that to speak out. We’re a live-and-let-live people. But now our backs are against the wall, and we have no other choice than to fight. We have to. We see that the coal industry is taking away the last of everything. And that’s our culture, our heritage, and our mountain way of life. When they destroy these mountains and these streams, it’s just like the coal — when it’s gone, it’s gone.

We have no other choice. That’s what we’re seeing now. We’re seeing that they’re taking away our children’s futures.

MJ.com: So, you feel that things are changing?

JB: Yes I do. I certainly do. When I see people stand up for their rights. When I see people that have been down for so long and I see them stand up to officials and to bureaucrats and stand up for their rights, then I know things are changing. And I know it won’t change without the people. The people are the only ones that can make a change in this. And I do feel like things are changing. Yes I do. Yes I do.