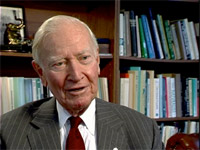 We’re at war in Iraq. They tell us we’re at war against terrorism. I’d say that George W. Bush has declared war on the environment. And I think that people ought to stand up and be counted in opposition to that.

I’m Russell Train. I’m chairman emeritus of the World Wildlife Fund. During the Nixon administration I was head of the EPA, and I’ve been a conservationist, environmentalist, for at least forty, fifty years now.

I grew up a Republican. You know, you sort of inherit these things. My great-grandfather was a Republican member of Congress during the Civil War. I certainly have always felt the Republican Party stood for conservative values.

The first National Park, Yellowstone, was created in 1872. Now that was a Republican year, right after the Civil War. General Grant, then the president, was the person you have to give credit to for Yellowstone. You can go back to Teddy Roosevelt and say he Roosevelt was a great conservationist. He created our National Forest and our national wildlife refuges and he took a strong interest in conservation. You get to Richard Nixon and you get a fantastic blooming of environmental interest and initiatives on the part of the administration. The EPA, the Environmental Protection Agency, was a creature of Richard Nixon. The Clean Air Act of 1972, the Clean Air Act of 1970, ocean dumping controls, clean drinking water, the Noise Control Act, the Toxic Substances Control Act, the Marine Mammal Protection Act, you name it.

So, during the Nixon administration and the Ford administration we accomplished a great deal. I was never officially part of the administration of George H.W. Bush – Bush the First. We were good personal friends and our families were friends. He asked me for advice on the environment; he asked me to explain the environment to him, although that wasn’t exactly an easy thing to do in a short while, but we sat down and talked in Florida for an hour or so. He really wanted to know. He entered the presidency with the intention of being a good environmental president. He sponsored the Clean Air Act amendments of 1990, and that’s the law under which we live today. He had a very good environmental record, and his heart was very much in the right place on the issue.

I feel George W.’s heart is in the wrong place on this issue. Calling something the Clean Air Act, the Healthy Forest Act when what you’re really doing is opening up the forest to logging. It’s almost an ideological antagonism. And there’s no understanding, I feel, of the importance of this issue. It’s addressed from the standpoint of, “What is such-and-such a regulation going to do to a particular industry that is a pretty good contributor to our campaign cause. And I think that’s what’s motivated its approach to environmental matters.

No one in this campaign has a monopoly on so-called flip-flops. The president himself, in his debates before the last election, promised that his administration would proceed to reduce carbon dioxide emissions. About three or four months later, I think in March, 2001, he said, “Forget it, we’re not going to do that.”

There has been a tendency on the part of this administration, this White House, to – some call it – distort science. And if they don’t like the science, they take out that particular finding. As I understand it, the EPA did do a study — at least a preliminary study, in New York, which showed some very troublesome, hazardous air pollutant problems. And they were told by – I don’t know whether the White House or the Council on Environmental Quality – to change those results

The Bible has the Gold Rule. The Golden Rule says, “Thou shalt do unto others what you would have them do unto you.” To my way of thinking, those others include the whole community of this Earth, all the living things – and inanimate as well – and we damage that extraordinary structure at our peril. And I think that’s what we’re doing.