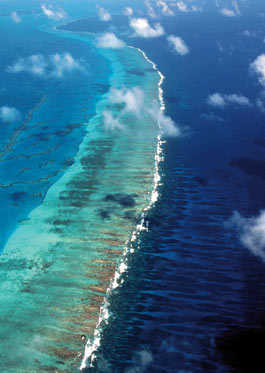 ON AN ISLAND 18 miles from Mexico’s southeastern shores, 30 mostly Mayan fishers prepare for a day of conch fishing. They, along with a ranger, a scientist who doubles as a policeman and doctor, and a handful of other researchers, are the only humans who live on Cayo Centro, a three-mile-long barrier island in the Banco Chinchorro Biosphere Reserve. The fishers have been here for as long as anyone can remember, and their shacks are cobbled together with zinc, cardboard, plywood, and whatever else has washed ashore.

Nestled among sunken Spanish galleons, Banco Chinchorro is the Caribbean’s largest atoll. Virtually every type of tropical organism in the Caribbean is found within its 497 square miles, from sea turtle to queen conch. The atoll’s coral is healthy and breathtakingly varied, with giant sea fans and barrel sponges the size of subcompact cars. Its jewellike reefs and lagoons are spawning grounds for fisheries in the Caribbean, the Gulf of Mexico, and the southeastern United States. At night, waves breaking over the reef sound like an insistent waterfall. Mornings, legions of orioles, hummingbirds, and radiant yellow kiskadees move through the mangrove.

And now, with development for cruise-ship vacationers booming along the nearby mainland, dubbed by tourists “Costa Maya,” Banco Chinchorro is being eyed by the cruise industry as an ecotourist’s paradise. Currently, only 150 tourists are allowed on the reef each day; those who come illegally are fined. But last September, developer Isaac Hamui petitioned Mexico’s environmental minister, Alberto Cárdenas, to bring 43,800 more tourists a year to Banco Chinchorro from the many ships that glide by delivering thousands of visitors at a time to tiny, beleaguered mainland towns like Mahahual. Hamui is not alone. With tourism Mexico’s fourth-largest source of revenues after oil, remittances, and foreign investment, the national tourism fund is encouraging development along the coast from Cancun to Belize.

Already, the consequences have been profound. Not subject to the same wastewater regulations that govern municipalities, cruise ships spill thousands of gallons of sewage into the ocean every day. In Mahahual, ships have decimated spawning grounds for rare fish, and catches are in decline.None of that has deterred Hamui, who is advocating for the creation of more resorts along the coast, including 5,000 rooms and lush golf courses. The Mahahual pier could be a home port, with tourists flying directly into an international airport to be built nearby. Coral reefs of the Caribbean are dying as the cruise industry ramps up, but at the Banco Chinchorro Reserve (above), the reefs still thrive.

Banco Chinchorro would be the cruise lines’ daytrip destination for diving, fishing, and sightseeing. But on Chinchorro, for the first time, Hamui’s plans are running up against resistance—from a group of precariously employed scientists, students, and barefoot fishers. “They’re crazy,” says Clemente Mayorga, who has fished the reef for 30 years and lives in a dirt-floor shack atop the atoll. “There’s nothing here.” To win their support, Hamui has offered the reef fishers money—$2 per tourist arriving on Banco Chinchorro, according to Mayorga. But, he says, “even if they gave me $5, it’s not enough because they’re going to destroy the reef and you can never replace it.”

The antidevelopment activists are holding workshops at fishing cooperatives and schools, encouraging residents to speak out, learn zoning law, and expose violations. They have had some successes, such as halting development of a protected area at nearby Tulum, a legendary Mayan site, and prompting hotels to blow the whistle on illegal construction by their competitors. “Small doors remain open to us,” says Patricio Martìn, the region’s most prominent environmental lawyer.

The dispute could be an embarrassment for the cruise-ship industry, which sees a gold mine in these pristine coastlines but wants to avoid the kinds of scandals that left its image tattered in the late 1990s. “Tourism is better for the Banco Chinchorro Reserve than fishing,” assures Teofilo Hamui, the developer’s son. Besides, he says, it’s the tourism industry and Mexican authorities who are pushing to develop virgin territory. “They’re always asking for more.”

The payoff for the local population has been far less than promised. “The government told people they’d be enriched by the mass tourism,” says Martìn from his office near Cancun’s Coco Bongo club. “But with package travel, the big money never enters Mexico. Foreigners get the money; we get the pollution and sprawl.” The Mahahual grocery store, which you enter through a broken screen door, pays local taxes. The cruise-ship pier does not.

On Banco Chinchorro, the day breaks on thousands of wingbeats of migrating seabirds. Felipe Fonseca, the scientist who also serves as doctor and cop, will spend the day monitoring the health of sea grass. He is a quiet man. “Banco Chinchorro is the last place of its kind left on the planet,” he says. “How can we let it be destroyed?”