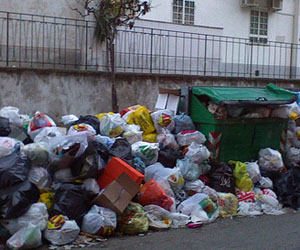 Part 2: In which our intrepid reporter continues his trash odyssey and witnesses the beautiful ugliness of recycling. [Read Part 1 and Part 3.]

Near the end of a day’s route, some trash collectors—often former military men who call their trucks “boats” or “planes”—will radio in that they’re “on final approach.” Their first stop is Recycle Central, a gray warehouse in the Bayview neighborhood that looks like a weapons depot. Loud, dirty, and mechanically byzantine, Recycle Central is a factory where disassembly lines split an old product—garbage—into multiple streams of raw materials. In other words, it’s where other people start to sort all the castaways that we can’t be bothered to sort ourselves.

At around 11 a.m., Pike drove onto Recycle Central’s soccer-field-sized “tipping floor.” He opened the Big Pig’s recyclables hatch and floored the truck, leaving behind an eight-foot-wide log of rejecta. I tiptoed across it and found my unmistakable square-shaped egg crate. “Your egg crate is about to get buried,” Reed said as a front-end loader smashed into the log and heaved part of it onto a 15-foot-high pile of recyclables.

The loader’s driver, Isidro Vallejo, nimbly scooped out a soiled comforter and carried it across the floor to a dumpster. I asked what he liked about the job. “I think it’s a great thing for the kids,” he said, leaning out of his cab. “It’s amazing how much ‘recycle’ we get over here. It’s incredible. I think it’s beautiful.” Especially after Christmas when the pile becomes a sparkling mountain of gift wrap: “Oh man, it gets pretty nice.”

Vallejo dumped my recyclables into what looked like an oversize wood chipper. It rattled violently as it spat them onto a conveyor belt that carried them up two stories to the “sort deck.” There, several “classifiers” in face masks plucked off nonrecyclable trash and threw it into a chute. Sunset says it employs more classifiers than other waste companies, giving it a cleaner stream. From what I saw, about 90 percent of the refuse continued down the line.

Past the classifiers, the recyclables were dumped onto a mechanical sorter. Bottles and cans fell past its spinning discs onto a new conveyor belt while paper and lightweight plastic continued down the main line. Plastic bags clog the discs, which is one reason San Francisco banned large stores from using them a couple of years ago. So many still gum up the works that Recycle Central has to be shut down twice a day while workers cut them out.

As the main line moved on, workers picked out bits of plastic from the paper and cardboard as it headed toward a high-density baler. A videocassette and a bra passed by and were fished out. “We like to say life’s a mess and we sort it out,” Reed said. Maillard Moss, a classifier who sorts plastics and aluminum, told me he’s seen all kinds of weird stuff moving down his line—even a dead dog.

On the platform below us, a conveyor belt picked up bottles and cans from where they’d fallen through the mechanical sorter and carried them past a magnet that pulled off steel, which would be sent to foundries in the Midwest. Next, the belt passed by an “eddy current separator,” a rotating set of magnets that push aluminum cans off the line. They’d end up at an Alcoa plant in Tennessee. The leftover plastic and glass bottles wound onto another flat conveyor belt from which I noticed a woman snatch a white skin-cream tub that looked a lot like mine; she tossed it into a cage filled with plastic. That load would go to a nearby plant to become plastic decking. I nearly blushed with pride.

Still, San Franciscans’ recyclables aren’t as high achieving as they used to be. Before the recession, a ton of cardboard from Sunset Scavenger sold for more than $100; last month the price fell below $50 before recovering to $85 on Monday. Prices for scrap metal, aluminum, and mixed paper have also fluctuated severely now that factories are producing less and homebuilding has slowed. And because we’re buying—and therefore ditching—less stuff, Sunset Scavenger is collecting about 10 percent less trash than it used to. Ironically, the company’s green image depends on people throwing things away. The recent dip in the company’s profitability—Reed wouldn’t say how much—hasn’t stopped it from diverting more recyclables. Last year it started accepting rigid plastics like disposable cups and clamshell containers. “People in San Francisco want to see us do more recycling,” Reed said, “so that’s what we’re doing.”

The next day, I headed to San Leandro, on the east side of San Francisco Bay, to see a junk pile that had been delivered that morning from Recycle Central and supposedly contained my Two Buck Chuck bottle. The pile now belonged to Strategic Materials, the West Coast’s largest recycled glass processor, and I had a hard time imagining it could be turned into something useful. It contained a stick of Gillette deodorant, a piece of corn on the cob, a crumpled Pabst can, an empty pack of Marlboro Reds, and nary a single unbroken glass bottle.

“That’s some ugly-looking shit,” I told Humberto Perez, the plant’s manger. “I tell you, man, single stream, that’s what it is,” said Perez. His boss, Dan Rodriguez, said he’d been unhappy about the quality of glass he’d been receiving ever since cities like San Francisco stopped collecting bottles and cans separately. “Single stream sucks,” he told me. “And almost everyone you’ll talk to will tell you it sucks. The only good thing is that you have one garbage can you have to throw all your recyclables in.”

The popularity of single-stream recycling with homeowners has created headaches for companies that use recycled glass. Inert, dense, and breakable, glass is often the last and most contaminated material to come off the recycling line. “It is the poor stepchild of the recycling business,” Rodriguez said. On the upside, recycled glass is highly prized by bottlers because it takes 25 percent less energy to melt down than does making new glass. And it’s one of the few recycled raw materials that hasn’t seen its price dip during the recession.

That gives Strategic Materials an incentive to process loads like mine, which contained about 85 percent glass by weight. A Caterpillar scooped up part of the pile, and Perez and I followed it across the factory yard as rain fell and a grayish soup of pulverized glass stuck to our shoes. A hopper spit the load onto a conveyor belt that entered a sorting factory, where it sounded like a hailstorm was trying to escape back up to the sky.

Inside, magnets like those at Recycle Central removed tiny debris from the glass—bottle caps, spark plugs, nails, cigarette lighters. On another fascinating sorting machine, shards of glass fell past lasers that detected contaminants, which were then shot out of the stream by tiny bursts of compressed air. The machine could also separate colored glass from clear glass.

We walked back outside, where glass shards were cascading out of the building into a large, emerald pile. “This is pretty good material here,” said Paul Faherty, Strategic Materials’ vice president, who had just joined us. The pile seemed to be almost entirely glass, though I spotted a plastic hypodermic needle—an increasing problem, Faherty said. “It’s just all because of diabetes,” he speculated, perhaps a tad optimistically.

Faherty and Perez walked me through a traffic jam of 18-wheelers to another factory that would convert the glass pile into “fine grind,” a key ingredient in fiberglass. Inside it smelled sweetly of beer. A reactor heated the glass shards, incinerating any paper that clung to them. Powdery ash fell from a chute like flicks from a giant cigarette. “It’s good glass,” Perez said as he scooped up a toasty handful. “Nice and clean.”

The shards climbed high above us and through a crusher that whirled them into a fine, green sand. “That’s fine grind,” Perez said. Later that day, it would be shipped by rail as a still-warm “hot load” to a fiberglass manufacturer near the Oregon border. Other loads go to local bottling plants that can get them back on the shelf as new six-packs of beer in as little as two weeks. “If we can’t sell it here, we take it out of state”—often as far as Oklahoma and Texas, Faherty said.

Given the strong demand for recycled glass, I was surprised that Strategic Materials frowned on single-stream recycling. After all, Perez had acknowledged that many of the loads that had been prescreened by Sunset Scavenger’s classifiers arrived in great condition. And even the foulest loads seemed to be no match for Strategic Materials’ advanced sorting system. But I later spoke to a national bottling company that echoed Faherty’s beef: So much glass was lost in the sorting and cleaning process that the amount recycled remained, at best, the same as cities’ where residents had to take the first pass at sorting.

Faherty seemed skeptical of San Francisco’s recycling success, though he stopped short of naming names. “The city of whatever says it’s got an 80 percent diversion rate; they are diverting their trash to me,” he complained. He gestured to a trash-flecked pile of glass near the spot where Sunset Scavenger had dumped my Two Buck Chuck, and added, “That’s not recycling.”

“We’re able to salvage most of the stuff,” he said, referring to all the metal and plastic that he culls from the glass. “Yet we’re still a big customer of the landfill.”

Part 3: In which our intrepid reporter concludes his trash odyssey and ends up in the dumps.