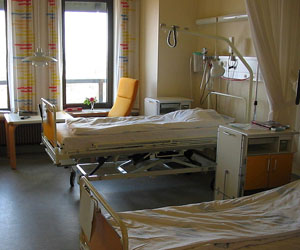 Florida health officials are drawing up guidelines that recommend barring patients with incurable cancer, end-stage multiple sclerosis and other conditions from being admitted to hospitals if the state is overwhelmed by flu cases.

The plan, which would guide Florida hospitals on how to ration scarce medical care during a severe flu outbreak, also calls for doctors to remove patients with a poor prognosis from ventilators to treat those with better chances of survival. That decision would be made by each hospital.

The flu causes severe respiratory illnesses in a small proportion of cases, and people who need ventilators and are deprived of them could die without the breathing help the machines provide.

But the state has not yet publicized the guidelines or solicited input from the general public.

The Health Department released a version of the draft plan at the request of ProPublica.

The document, drawn up by a team from across Florida that included Orange County Health Director Dr. Kevin Sherin, addresses one of the most delicate issues in medicine: what to do if the number of severely ill people needing ventilators and other treatment dramatically exceeds what is available.

The goal, the plan says, is to focus care on patients whose lives could be saved and who would be most likely to function better if they were given whatever resources were available. It says those decisions are not to be made based on patients’ perceived social worth or social role, but the plan calls for different rules for some populations.

The list of conditions that disqualify hospital admission would be applied to most people only in the two most severe levels of a pandemic. However, they would be applied in the first level of a pandemic for people transferred to hospitals from “other institutional facilities” such as nursing homes and mental-health centers.

All deaths in reported laboratory-confirmed novel H1N1 influenza cases. Influenza may not be the attributable cause of death in all cases. Approximately 25% of deaths are in people with no clear underlying medical condition, 121 deaths in those with laboratory-confirmed novel H1N1 influenza reported. 11 deaths were newly reported (12:00 p.m. October 6, 2009 to 12:00 p.m. October 13, 2009) (Data from Florida Department of Health)

A flood of patients

Florida’s planning effort reflects a growing acknowledgment that the nation’s hospitals would be unable to cope with the flood of patients that a severe influenza pandemic such as the one that gripped the United States in 1918 would unleash. That resource gap is in the spotlight now, as the country is battered by a second wave of pandemic H1N1 influenza, informally known as the swine flu.

“What we have seen are real stresses, particularly on the emergency departments,” Thomas Frieden, Centers for Disease Control and Prevention director, said in a news conference last week.

The H1N1 flu is much milder than the 1918 flu, but a small percentage of H1N1 patients, including some who have no risk factors and are young and healthy, develop severe breathing problems requiring mechanical ventilation and life support.

So far, intensive-care units have not been overwhelmed with people in need of breathing support.

In Winnipeg, Manitoba, all regional critical-care beds were full at the peak of the outbreak last spring, and in Mexico, patients experienced long delays before being admitted to ICUs. Four died before being transferred from the emergency room.

Florida health officials think that the number of severely ill flu patients will likely remain at a manageable level, provided residents gets vaccinated, that they follow advice about not spreading germs and about when to stay home (see myflusafety.com) and the existing flu strain does not mutate into a more virulent form.

In the case of a much more severe scenario, Florida’s draft guidelines would call for hospitals to turn away anyone whose doctor has signed a “Do Not Resuscitate” order, which instructs rescuers not to revive a patient whose heartbeat or breathing stops. A recent report from a panel of national experts convened by the Institute of Medicine urged states not to use DNR orders for this purpose, because they reflect preferences and foresight about end-of-life planning “more than an accurate estimate of survival.”

The Florida plan calls for intensive-care patients and those using ventilators to be reassessed with a clinical scoring tool after 48 to 72 hours. Those whose prognoses have significantly worsened would be taken off the machines or discharged from critical care to make way for others who may have a better chance of survival. They would be given palliative care to keep them comfortable if needed.

Analysis of 1400 patients hospitalized in states within the CDC’s Emerging Infections Program Network surveillance system. Results are approximate and indicate that more than 45% of patients had no underlying chronic condition. Obesity, a possible risk factor for severe illness with H1N1 infection, was not included in the analysis. In an additional analysis of 500 hospitalized children, the most common underlying conditions were asthma, chronic lung disease, neurologic or neuromuscular diseases, and sickle cell or other blood disorders. (Source: U.S. Centers for Disease Control and Prevention)

One goal of Florida’s plan is to “reduce or eliminate” the legal liability of health care workers who, in good faith, deny treatment or withdraw it from some patients in an emergency. The plan includes sample executive orders that the governor could issue to shield workers and authorize hospitals to implement the guidelines.

As to whether the governor would likely sign such an order, “it’s premature for us to say at this point,” Sterling Ivey, a spokesman for the governor’s office, said. He said it was likely the draft had not yet been sent to the governor, but that he would “look forward to reviewing the plan.”

The draft document also outlines how the health-care system should stretch critical resources, including oxygen, ventilators, medications, IV fluids and staffing, before moving to ration care. The guidelines suggest sterilizing and reusing some supplies, canceling surgeries and other procedures that are not absolutely necessary, and reassigning and training staff to perform critical tasks.

State officials would not release the comments received from medical organizations so far. Health Department officials have yet to review those comments and a revised document, according to Viamonte Ros’ letter, “will be vetted through a series of workshops to receive a broader review” before being finalized.

Viamonte Ros will have final approval authority, and the plan will remain voluntary and subject to review and modification as necessary, according to Florida Department of Health information officer Doc Kokol.

Sherin, of Orange County, said his key concern is the availability of ventilators and critical-care beds in a pandemic.

“So far so good,” he said. “We haven’t had a lot of critically ill H1N1 patients that have required ventilation yet. But if you end up with a large number of very sick people, that would be the critical resource in the hospital.”

He added, “The public needs to lower expectations when we get to places of critical-resource shortages, and these guidelines would be helpful for hospitals, for EMS, for physicians, for emergency responders to be able to deal with the circumstances.”

Sherin said the draft still requires improvement and will benefit from a broad community process “where as many sets of eyes look at it as possible.”

Florida’s draft guidelines aim to provide the “greatest good for the greatest number” when doing the best for each patient is no longer possible.

That goal needs to be balanced with an effort to distribute scarce resources in the least discriminatory way, said professor Ken Goodman, director of University of Miami’s bioethics program, who was invited to comment on the draft.

“We want to make the most of our resources,” said Goodman, who also directs the Florida Bioethics Network. “Among the ways we can do that is to somehow take the evidence about what we think works and bolt it to the values that I think are uncontroversially shared: Namely, life is good, suffering is bad. And so how do we do it? It’s a very difficult problem to figure out how the world of science can help ensure that our strategies for allocating resources are fair and effective.”

The Florida Health Department’s original goal was to have a final draft of the plan ready by December. But with public-health workers scrambling to cope with other aspects of the H1N1 pandemic, that is now unlikely, state officials said.

Even so, the draft plan likely would shape the state’s response to a sudden, extreme surge in patients requiring hospital treatment.

Florida plans to accept public input after the guidelines are revised by health officials.

“The exact plan for engaging the public is still being discussed,” Kokol wrote in an e-mail, “but it will likely include regional meetings for public input as well as electronic receipt of comments.”

When Utah tested a similar plan against reality in a drill in late August, the results revealed the difficulties Florida clinicians and patients are likely to encounter if its plan is needed.

Utah family physician Pete DeWeerd had to tell the mother of a mock patient that her 7-year-old daughter, who had cerebral palsy and was suffering from the flu, would be turned away from the hospital and likely die.

He added, “It was awful. You get a huge lump in your throat.”

Kurrus said that although the exercise was covered widely in Utah’s media, the public isn’t aware of what the triage protocols contain.

“Even with the scenarios played out and the discussions entertained, they still don’t understand,” he said. “It’s, ‘Why can’t I get into the hospital? Why can’t Grandma get put on a respirator?’”

Goodman, the ethicist, said a frank discussion about the value-laden decisions surrounding who gets treatment in disasters is crucial. “This should be an ongoing process that includes new evidence as it becomes available and that includes, in an open society, the participation of citizens.”