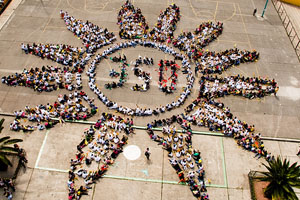 Nearly two decades after writing a book that popularized the term “global warming,” MoJo contributing writer Bill McKibben founded 350.org. He is chronicling his journey into organizing with a series of columns leading up to the global climate summit in Copenhagen this December. You can find the others here. And you can put yourself on the cover of MoJo‘s special issue on climate change here.

It’s been a remarkable few days for all of us working in a warren of temporary offices deep in downtown Manhattan. We’ve had one wild high after another, as it became clear that we had actually managed to pull off what one journalist after another has now called “the most widespread day of political action in the planet’s history,” with 5,200 actions in 181 countries. Those ebullient moments included:

* Our first hint that the 350.org global day of action would be a bigger success than we’d dared hope actually came a day early, when our Ethiopian team jumped the gun and held their rally—and suddenly we had pictures of 15,000 people surging through the streets of Addis Ababa.

* The first official pictures, from the sunrise action in Wellington, New Zealand, which arrived midday Friday, followed by photos from across the country’s North and South Islands, a stream that would continue undiminished for the next 36 hours as the sun moved across the globe.

* The moment on Saturday when it became clear that we’d managed to crack through in the press: All of a sudden we were across the top of the electronic New York Times and the dominant story on Google News, a surer sign that our message was getting out in every language and on every continent.

* The slightly insane feeling of standing in the middle of Times Square addressing a rally while the huge JumboTrons behind us stopped advertising beer and started showing hundreds of pictures of actions.

By now things have calmed down a little. The core team of young people who actually made this happen—Phil Aroneanu, Will Bates, Kelly Blynn, May Boeve, Jamie Henn, Jeremy Osborn, and Jon Warnow—are off to the UN to present its top climate negotiator with a book of pictures from around the world. I did one more round of the TV talk shows, and looked at the stack of Sunday front pages from every corner of the planet. It’s been a heady few days, in other words.

But none of that is actually what’s on my mind. What I keep thinking about is the bank of pictures now resting in our Flickr photostream—nearly 20,000 at last count. We’ve hardly had time to get through a third of them, but they are beyond amazing. They show, from place after place, the sheer creativity and commitment of people. There’s not a rock star or a movie actor or a charismatic politician in sight, just crowds of people trying to figure out how to get across to their leaders that they simply have to pay attention to the science.

We have pictures of climbers with banners high on cliffs on every continent, and sailors out on boats on every sea with 350 flags; endless teams of 350 bicyclists, or 350 scuba divers down on reefs, or—you name it. But there are also whole subcategories of pictures that make me just as amazed: big groups of women in full veils, holding signs in Arabic letters but also in Arabic numerals: 350! Kids from around the planet: a Pentecostal school in Ghana, say, or an entire student body spread across a Delhi cricket pitch. From the banks of the dwindling Dead Sea: a giant human 3 in Israel, and a 5 in Palestine, and a 0 in Jordan. I can’t begin to say how powerful these pictures are—I could spend the rest of my life looking at them, and I probably will.

We’ve been doing our best to communicate in everyone’s language, and the offices have been full of people shouting in Spanish or French to be heard over bad cell phone connections. But around the world our organizers have been writing us in their best English. Here’s something that just arrived from Indonesia:

“The action took place in Sidhi Astu Orphanage House, Tuka, Bali, Indonesia. The action was Success, the children so excited and learnt with fun. They also painted with hope and caring about climate change. They shared to us how they feel about global warming, and never knew it clearly before or what habits can make the earth more hot now. It was great pleasure to us that the children who little bit far from information about climate change and another actual issues accepted us in this action and want to learn more about this issues. We relized that the orphanage Children also have a chance to learn and mitigate climate chance, as they may be the first kind of people who will get impact on climate change as they have no family.

“Last, we want to share with you from The Orphanage Children that: ‘Even No One Care of Us, We Can start to Care Each Other and Nature First.'”

Hard to write when you’re tearing up.