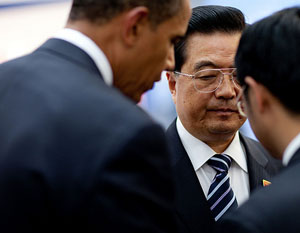 The final deal at the Copenhagen climate summit, which was convened to develop a comprehensive international response to the threat of global warming, came down to a behind-closed-doors conversation among some of the most powerful people in the world about the difference between two terms: “examination and assessment” and “international consultations and analysis.”

Then again, there may not have been a final deal. Late on Friday night, President Barack Obama announced that an agreement had been reached, establishing a minimalist accord that would not set a firm schedule with hard-and-fast targets for reducing emissions. But after Obama held a press conference to declare semi-victory—”this is going to be a first step”—and jetted back to Washington, European officials said nothing was in the bag. And Lumumba Stanislaus Di-Aping, the Sudanese chairman of the G77 bloc of least developed nations, claimed there was no deal. “What has happened today confirms what we have been suspicious of that a deal will be imposed by United States, with the help of the Danish government, on all nations of the world,” he said.

This raised the question, was the Obama deal merely a side deal that would be agreed to by some nations but not all? A convenient bypass of international climate negotiations?

In that short press conference, Obama noted that the pact had come together during an evening meeting he held with the leaders of major developing nations—China, Brazil, South Africa, and India. “Each agreed,” he said, “to list national actions and commitments with international consultation and analysis under clearly defined guidelines” and aim to limit the global temperature rise to 2 degrees Celsius. But it wasn’t that simple—or clear—according to a participant in that decisive gathering, Brazil Ambassador Sergio Serra.

The meeting, which lasted more than three hours, was hosted by Premier Wen Jiabao, and first began with Brazilian President Luiz Inacio Lula da Silva, Indian Prime Minister Manmohan Singh, and South African President Jacob Zuma attending. About an hour into it, Obama arrived, with Secretary of State Hillary Clinton. The participants did not deal with numbers or targets for emissions. Instead, the conversation turned to the knotty matter of verification. Throughout the summit, the United States, Europe, and Japan had been pressing China, which has vowed to reduce the pace of its growing emissions, to accept outside monitoring of its performance. China has resisted, claiming it could audit itself. This remained “the most contentious thing,” Serra said. “The Chinese were very reluctant to accept any kind of international supervision or international analysis of the performance of their actions.”

As the discussion continued, Obama dropped a term on the table: “examination and assessment.” This suggested direct monitoring of Chinese emission curbs by outsiders. Chinese officials in the room pronounced it unacceptable.”We weren’t that happy with it, either,” Serra noted. So a new description—”international consultations and analysis”—was worked out. A “consultation” is obviously less intrusive than an “examination.” But what does “international consultations and analysis”—soon to be referred to as ICA—mean? Asked this, Serra shrugged and said, “Ehhhh.” He added, “The definition will be negotiated by a panel of people. They will decide what it means, like everything else.” Obama promised to sell this not-well-defined ICA phrase to the Europeans. He also told Wen and the others that he had been asked by the Europeans to push for the below-2 degrees level.

The resolution of that six-word dispute eased the US-China deadlock that had paralyzed the summit, creating space for an agreement that may not be an agreement—christened the “Copenhagen Accord.”

Whether or not that title was presumptive, the draft document released is vague. It contains few specific numbers—beyond “recognizing the scientific view” that a global temperature rise should be “below 2 degrees.” It dropped language from an earlier draft calling for cutting global emissions in half by 2050. The agreement urges developed nations to implement reductions they have already pledged—without spelling out those numbers or establish baseline years. Developing nations would establish their own emissions curbs. (All these countries are supposed to declare their reductions targets by February.) The China-friendly verification provision rests on that vague “international consultations and analysis clause.” The agreement also incorporates the US-European offer to help mobilize $100 billion a year until 2020 to help poorer nations contend with climate change, and commits $30 billion for short-term funding for related programs, such as deforestation prevention—without providing details about these financial programs. Most important, the draft says nothing about future negotiations and any pathway toward a legally binding treaty incorporating global cuts.

“The result is not what we expected,” said Serra. “It may still be a way of salvaging something and paving way to another meeting or series of meetings next year.”

Announcing this agreement, Obama himself acknowledged a weakness with the proposal: “With respect to the emissions targets that are going to be set, we know that they will not be by themselves sufficient to get to where we need to get by 2050….There are going to be those who are going to—who are going to look at the national commitments, tally them up and say, you know, the science dictates that even more needs to be done.” But he contended that this agreement—by encouraging all the major economies (developed and developing) to commit jointly to emissions curbs—marked a “shift in orientation” and insisted that he remained committed to seeking a binding treaty.

US environmentalists split over whether Obama’s move was a triumphant save or an act of self-interest. Environmental Defense Fund head Fred Krupp and League of Conservation Voters president Gene Karpinski high-fived each other in a Bella Center hallway. “Obama has delivered the clear breakthrough we needed on climate change,” exclaimed Jeremy Symons, a senior vice president of National Wildlife Federation. By rounding up China and India, Obama has improved the prospects for the climate change legislation pending in the Senate—where foes of the bill have used these nations’ absence from previous accords as a justification for opposition. And until a bill passes, Obama can’t make good on his modest proposed reductions.

But not all the American environmentalists were celebrating. “This is not a strong deal or a just one—it isn’t even a real one,” said Erich Pica, president of Friends of the Earth US. “The actions it suggests for the rich countries that caused the climate crisis are extraordinarily inadequate. This is a disastrous outcome for people around the world who face increasingly dire impacts from a destabilizing climate.”

The Obama agreement was a sly maneuver. The United States sidestepped the official proceedings and found a way to separate major developing nations from poorer ones—while skating past European desires for a more comprehensive and binding agreement. Though European negotiators first declared they were not on board, as the final evening of the summit entered the wee hours, Europe conceded. At a 2:00 a.m. press conference, dour-looking European leaders announced their unhappy support. “This accord is better than no accord, but clearly below our ambition,” said European Commission President Jose Manuel Barroso. “We have to be honest.”

Even one of the diplomats who helped broker the deal was not entirely pleased. Asked if this deal made Copenhagen a success, Serra replied, “There is the perspective that with this agreement we may reach a satisfactory and equitable result next year.” Then he paused: “The disappointment is still there.”