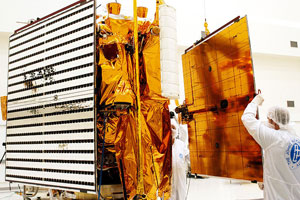 Also from the Climate Desk: One possible solution to the green-technology patent deadlock.

For the last 20 years, politicians, diplomats, and green activists alike have assumed that dealing with global warming would require a United Nations agreement on the transfer of clean-energy technologies from rich countries to poor ones. But US policymakers and firms feared that tech transfer was code for tech piracy: China already steals billions of dollars worth of American intellectual property annually—from Microsoft Office CDs to Avatar DVDs—so why would we give away our next generation of solar panels and wind turbines? “Developing countries, like China and India, see climate change as an opportunity to gain free access to American [intellectual-property rights],” thundered Rep. Jim Sensenbrenner (R-Wis.)*, before the Copenhagen talks in 2009, “but far from mitigating climate change, relaxation of IPR would ruin our only hope of responding.”

Some business executives and economists have even argued that nations needed stronger, not weaker, intellectual-property laws. If China might reverse-engineer and more cheaply manufacture a breakthrough solar panel or nuclear plant from the United States, then there would be no point for investors to spend their money on development in the first place. Why would anybody invest in anything that they would have to just give away?” a General Electric executive asked.

In response to all the talk of weakening intellectual-property laws, the US Chamber of Commerce created the Innovation, Development and Employment Alliance to lobby for more-restrictive patent laws. And in the run-up to climate talks in Copenhagen last year, conferences were held and a raft of reports released, all aimed at finding some compromise around the intellectual-property conflict.

Yet what was strikingly absent from the conversation was any recognition of the reality unfolding right in front of everyone’s noses: Clean-energy technologies are already being transferred rapidly for reasons having nothing to do with global warming or the UN. It looks as if the next great technology transfer won’t be from rich to poor countries, but from China to the United States.

The last few years have seen perhaps the largest energy-technology transfer in human history. In 2004, China paid about $5 billion for four state-of-the art nuclear reactors from Pennsylvania-based Westinghouse Corp. In exchange, Westinghouse agreed to transfer the technology and know-how to Chinese state-owned firms. French state-owned company Areva lost out because it refused to turn over its intellectual property. Now China is set to use Westinghouse intellectual property to build an additional 28 nuclear plants based on the same technology.

Energy firms are willing to part with their intellectual property because they want a stake, even a minority one, in the rapid growth of the energy sector in China and around the globe. “China will be the world’s nuclear industry leader,” the chief technology officer of Atomic Energy Canada flatly told Bloomberg.

It’s not just nuclear. Last fall we analyzed all of the major global clean-energy sectors and found that China, Korea, and Japan are outcompeting the United States in the development of solar and wind power, electric cars, and high-speed trains. China’s share of global clean-tech investment has risen each year, finally surpassing the United States for the first time in 2008. These Asian nations and China in particular aim to dominate global export markets, so that future tech transfer will come from China to us. To some extent, it already does: 79 percent of the US economic-stimulus funding for wind turbines went to foreign firms.

Around the time academics and corporate patent attorneys were debating complicated tech-transfer frameworks at the University of California-Berkeley and Chatham House, Arizona-based First Solar was inking a deal with China to build the world’s largest solar-panel farm—a 25-square-mile behemoth in Mongolia that will provide power to 3 million households. “We will bring people over in order to transfer our knowledge related to the design and engineering of the plant,” First Solar’s CEO explained. “It’s an IP transfer in that regard.” Rather than reacting in horror, investors pushed First Solar’s stock price up 10 percent.

The capacity to create new intellectual property is being transferred as well. While leading technology firms have been creating R&D centers in China, neoliberal greens like New York Times columnist Thomas Friedman reassure themselves that the United States will export the dumb manufacturing jobs while keeping the smart innovation jobs here at home. This is a fantasy. In recent months, IBM, GM, and Applied Materials have created clean tech R&D centers there. Applied moved its chief technology officer to China, which offered it a football field-size lab for manufacturing innovation. And while the United States ranks sixth out of 40 countries in terms of innovation, according to a comprehensive study last year by the Information Technology and Innovation Foundation, it ranks last in its rate of improvement over the last decade.

Economic theory states that technology innovation comes from the private sector, and that when the states attempt to get involved they tend to “crowd out”—scare off or outcompete—private firms, which are by definition more efficient than big, dumb governments. Government attempts at energy-tech innovation are considered a joke. Exhibit A is the Synfuels coal-to-liquid fuels program of the 1970s, started in response to oil price shocks and widely viewed as a boondoggle. Governments shouldn’t pick technology winners and losers, say liberals and conservatives alike. It fails every time.

But the actual economy has a funny way of undermining economic theory. Call it creative disruption. The financial crash of 2008 was created by Wall Street firms, not governments. It thus obliterated the neoliberal chestnut that markets are self-regulating. Now China’s green leap forward reaffirms the fact that states enable and fund private firms to innovate. Instead of crowding out private investments, China is crowding them inside its borders. Last year, China attracted $34.6 billion in private clean-tech capital, twice as much as flowed into the United States.

None of this should surprise us. China is simply doing what every other nation in human history has done, which is to guarantee its citizens and businesses access to reliable sources of energy—the metabolism for the entire economy. The US government built hydroelectric dams during the early decades of the 20th century, opening up the West for major new cities and energy-intensive industries like aluminum manufacturing in Washington state. Nuclear plants were next, and though overhyped at the time they still provide 20 percent of America’s electricity. Solar panels and large wind turbines were invented here and further advanced by the US space program; recent improvements have come from Japanese, German, Spanish, and now Chinese governments.

Beyond energy, the American government picked such technological losers as the railroads, telegraphs, telephones, jet engines, microchips, the Internet, cell phones, X-rays, radars—the list goes on and on. Even private labs that justly received a lot of credit for innovation, like Xerox PARC and Bell Labs, were heavily funded by the US government.

As for that dreaded Synfuels boondoggle, it turns out the program did what Congress asked it to do—produce liquid fuels for $60 a barrel. The reason it was canceled was that the price of oil had dropped to $10 a barrel. And the gasification technologies that were developed along the way were eventually used to suck oil out of nearly depleted wells, and for carbon capture and storage.

In light of all this, the obsession with patent laws and other regulatory measures is a distraction. There is no need to change the US intellectual-property regime or to modify intellectual-property laws in other countries. Firms that want to move to China will continue to do so, making their own agreements for technology transfer as they see necessary. In the end, the greatest barrier to a much needed energy technology revolution is neither patent law nor the absence of a global climate treaty, but rather a kind of collective amnesia born of a single-minded neoliberal orthodoxy. Americans have largely forgotten the role of public support in our development. We look at our dams and imagine they were built by private utilities. We credit Google and Apple with the global communications revolution without any awareness that they would not exist had the government not spent billions on microchips, computer-science scholarships, and that white elephant invented in a government laboratory, the Internet.

Greens convinced themselves they solved acid rain by passing cap-and-trade for sulfur dioxide, which led to innovation in clean-air technologies. In truth, smokestack scrubbers and low-sulfur coal made the legislation possible in the first place. Libertarian conservatives, for their part, tell fanciful inventor-as-hero stories, wherein great men like Hewlett, Gates, Jobs, and the Google guys received no help from the government. In truth, none could have done what they did without direct government assistance in the form of electrification, military procurement, science education, and multidecade R&D investments.

If the world does anything about climate change, it will look a lot more like what the Chinese government and Western energy-technology firms have been doing in practice, and less like what liberals and conservatives in the West have been proposing since the late 1980s. The nations that lead in these sectors will be those that provide private firms with the necessary conditions for innovation—big laboratories, R&D centers, PhD scientists, engineers, and government demonstration contracts. In exchange, private firms recognize that some of their intellectual property will spill over in the same way that Silicon Valley firms borrow or steal from each other (depending on your point of view).

Though it is easy to lapse into an end-of-empire narrative, America regularly remakes itself in the face of foreign competition, from the Russians in the 1950s to the Japanese in the 1980s. There are reasons to be hopeful. Recognizing the role of innovation for economic growth, President Obama increased his request for federal R&D funding. Secretary of Energy Steven Chu, who used to work at Bell Labs, is lobbying Congress for greater funding for science and education. There’s still time, it seems, for the United States to participate in the clean-energy race. Let’s just hope we don’t have to wait for the end of neoliberal economic orthodoxy for it to happen.

*Rep. Jim Sensenbrenner (R-Wis.) was originally misidentified as a senator. He is a member of the House.