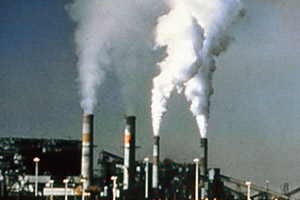 The Obama administration has repeatedly vowed that tackling climate change is among its top priorities. But in a landmark legal case that could force the nation’s dirtiest power plants to clean up their acts, the administration this week sided with some of the biggest polluters in the country. This latest development has left a number of environmental advocates wondering whose side the White House is really on when it comes to global warming.

Five years ago, Connecticut, seven other states, New York City, and several conservation groups filed suit against the US-based power companies most responsible for greenhouse gas emissions, arguing that the climate-change-causing pollutants expelled by the their coal-fired power plants constitute a “public nuisance.” Lawyers for the plaintiffs used EPA records to pin down the five biggest offenders—American Electric Power, Duke Energy, Southern Company, the Tennessee Valley Authority, and Xcel Energy—and filed suit on the basis that all those planet-warming coal-fired power plants were creating a problem for everyone else.

The district court sided with the utilities in September 2005, but the US Court of Appeals for the 2nd Circuit last September reversed that decision. The appeals court reversal was based largely on the fact that EPA does not currently regulate carbon dioxide under the Clean Air Act. Until such regulations are enacted, the court said, plaintiffs could seek recourse using this common-law public nuisance argument.

Earlier this month, the utilities asked the Supreme Court to review the case, arguing that public nuisance suits should not be used to address global warming emissions and that the issue is one that should be addressed by Congress, not the courts. Now the Obama administration is supporting the polluters in this case, leaving many environmental advocates to ask, as Clean Air Watch President Frank O’Donnell wrote in an email, “What the heck is happening?”

Acting Solicitor General Neal Katyal filed a brief this week on behalf of the Tennessee Valley Authority in support of the defendants asking the Supreme Court to direct the appeals court to reconsider its decision, which Greenwire first reported on. (TVA is a federally-owned corporation and the largest public power company in the country, operating 11 coal-fired power plants as well as nuclear power plants and hydro-dams.)

In the brief, Katyal argues that because the EPA is already on the case, the Supreme Court should vacate the 2nd Circuit Court’s ruling and send the case back for reconsideration. SCOTUS has, of course, already weighed in on the issue of global warming. In 2007’s Massachusetts v. EPA, the court ruled that the agency could regulate greenhouse gases under the Clean Air Act, should it determine that those gases are a threat to human health. And in April 2009, the agency declared that the gases do endanger humans, thus beginning the process of regulation. In this week’s filing, the Obama administration argues that it’s already following through on this front, so the lower court should have to reconsider its 2009 ruling.

“Since this court held in 2007 that carbon dioxide falls within that regulatory authority, EPA has taken several significant steps toward addressing the very question presented here,” Katyal wrote. The EPA’s regulatory approach, he wrote, “is preferable” to letting the courts “sit as arbiters of scientific and technology-related disputes”—serving in practice, then, as regulators of pollution. In other words, the EPA is already on the case, so no outside litigation is necessary.

This is cold comfort to environmentalists, who are anxious that the administration isn’t moving fast enough on those regulations. “It reads like a Bush administration brief,” Matt Pawa, an environmental lawyer representing the plaintiffs in this case, told Mother Jones. “It felt like being stabbed in the back. The Obama administration claims to care about global warming, so why is it opposing an effort curtail greenhouse gas emissions from coal-fired power plants?”

“Public nuisance” complaints are most often filed, as the legal blog Warming Law explains, so “a property owner may ask the court to stop a defendant who is interfering with the owner’s enjoyment of his own property and, in some circumstances, to force the defendant to pay damages.” The power plant case has been viewed as a test of whether this kind of argument can be applied to global warming. Pawa has also made a similar argument on behalf of the Inupiat community of Kivalina, Alaska, which is suing 19 US oil companies and utilities, including ExxonMobil and BP, for melting the land their village sits on.

The biggest problem, argue the plaintiffs, is that these promised EPA regulations aren’t yet in place. According to the timeline issued by the agency, the initial rules aren’t coming until 2011, and that’s just for the largest and newest sources of pollution. The EPA’s initial regulations won’t touch existing coal-fired power plants, such as those at the heart of this case, unless there are significant changes made to those facilities. It’s not yet clear when, if ever, the EPA would start phasing in rules for all older plants.

The Obama administration didn’t have to weigh in on the case at all, which makes its intervention all the more aggravating for environmentalists. “At the very least, they could have stayed out of it,” said Jonathan Zasloff, a law professor at UCLA. Letting the case go forward could also create a greater impetus for legislative action on climate change, something the administration has maintained is its preference anyway, and given it more bargaining power over polluters.

Instead, Zasloff notes that the administration is basically giving big emitters an escape route, as utilities (including some of those involved in this case) are expected to challenge and attempt to delay the EPA regulations every step of the way. This will, of course, make it more difficult for the agency to accomplish what it says it will do. By siding with them in this case, Zasloff says, “essentially the Obama administration and the solicitor general appear to have made their own lives a lot more difficult.”