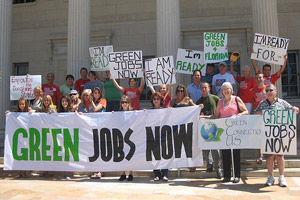 Thanks to the folks at the Climate Desk for bringing this conversation together, and to Michael Shellenberger and Ted Nordhaus for their introduction.

So much has been written about the inability of policymakers to produce breakthroughs in Copenhagen and Congress that one might think that the only way to address climate change is to pass massively complex bills and treaties. Of course, there are many pathways to cut carbon, and clean-energy advocates in the US have made real progress even as recent legislative efforts have stalled.

Knowing there won’t be a climate bill anytime soon doesn’t mean we have to start all over again. Before I address the huge global challenge that we all know we need to solve, let me pose an important human one. After reading this exchange of essays, please ask the next person you meet these questions:

— “Does anyone in your family use an asthma inhaler?”

— “Is anyone in your family having trouble finding a job?”

— “When was last time your family had a discussion about carbon sequestration or cap-and-trade?”

Within those answers is perhaps the most important key to reducing emissions: Politicians and clean-energy advocates musts stop talking about policy and start showing people how clean-energy solutions that are available right now will make their lives better.

Replacing coal-fired power plants with clean energy is a good example of how attacking climate change at a local level can deliver powerful results. The Sierra Club and a diverse coalition of grassroots organizations have already prevented 139 proposed coal plants from being built. Collectively, these grassroots victories have prevented more than 500 million tons of greenhouse gas emissions annually.

The coalition is increasingly focused on replacing the nation’s oldest and dirtiest coal plants with clean-energy solutions. The approach uses public health laws like the Clean Air Act to force utilities to clean up coal-burning facilities. Then, at the local level, community leaders and energy advocates show how replacing coal with clean energy is actually cheaper, will stimulate job growth, and improve air and water quality.

The strong investments in energy innovation that Shellenberger and Nordhaus call for will accelerate this trend, but we’re already having an impact even without them: Utilities have identified 10,000 megawatts of dirty coal-fired power slated for closure in just the last six months alone. Earlier this week, Arizona Public Service Company announced it would close three more coal plants, adding another 560 megawatts of dirty coal energy soon to come offline.

At least one-third of existing coal plant generation could be retired and replaced with clean energy within this decade. Reaching that goal—state by state and community by community—won’t require any new legislation. But it will require popular support. The people living in those communities will rightly demand to see how rather than taking something away, we’re delivering something better: clean-energy jobs, healthier communities, energy security, safer drinking water, and cleaner air (not to mention giving ourselves a fighting chance against climate change).

Consider Delaware. A few years ago, community groups there defeated a proposal for a new coal plant and then took aim at the state’s existing fleet. As part of negotiations to phase out these plants, the company that proposed the plant, NRG Energy, agreed to provide specialized training for current employees so they could transition to work at the planned offshore wind farm or in other clean-energy jobs. This shows we can cut emissions, create jobs, and take care of workers at the same time.

The link between politics, economy, and ecology was highlighted on Nov. 2 in California with the defeat of Proposition 23, a ballot initiative bankrolled by out-of-state oil companies that would have rolled back the state’s landmark climate bill until unemployment dropped below 5.5 percent for a year. Because we could point to existing green jobs and to industries that the proposition would kill, voters overwhelmingly rejected it. And that’s in a state with the third-highest unemployment in the nation.

As we address one of the greatest challenges humanity has ever faced, it’s important to remember that fighting climate change isn’t just an obligation, it’s an opportunity. In Delaware, California, and across the country, voters and policymakers are realizing that we should invest in energy savings and clean energy not in spite of the economic downturn, but because of it.