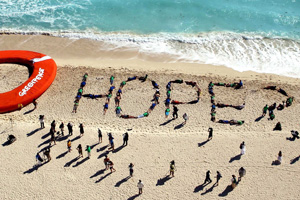 The UN’s big climate conference ended Saturday in Cancún, with claims of modest victory. “The UN climate talks are off the life-support machine,” said Tim Gore of Oxfam. “Not as rancorous as last year’s train wreck in Copenhagen,” wrote the Guardian. Patricia Espinosa, the Mexican foreign minister who brokered the final compromise, described it as “the best we could achieve at this point in a long process.”

The conference did indeed make progress on a few important issues: the outlines of financial aid for developing countries to help them deal with climate change, and some ideas on how to monitor greenhouse gas emissions in China and India. But it basically ignored the two crucial questions: How much carbon will we cut, and how fast?

On those topics, one voice spoke more eloquently than all the 9,000 delegates, reporters, and activists gathered in Cancún.

Barack Obama was in Washington, holding a press conference to discuss the liberal insurgency against his taxation agreement with the Republicans. He said he’d fought hard for a deal and resented the criticism. He harked back to the health-care fight when what his press secretary had called the “professional left” (and Rahm Emanuel had called “retards”) scorned him for not winning a “public option.” They were worse than wrong, he said; they were contemptible, people who wanted to “be able to feel good about ourselves, and sanctimonious about how pure our intentions are and how tough we are.” Consider Franklin Delano Roosevelt, he continued: when he started Social Security it only covered widows and orphans. Medicare, at its start, only helped a relative few. Sanctimonious purists would have considered them “betrayals of some abstract ideal.” And yet they grew.

It was powerful and interesting stuff, especially coming from a man who ran on abstract ideals. (I have t-shirts on which are printed nothing but his name and abstract ideals.) I don’t know enough about health-care policy or tax policy to be sure whether he’s making a good call or not, though after listening to much of Bernie Sanders’s nearly nine-hour near-filibuster I have my doubts.

I do know the one place where the president’s reasonable compromises simply won’t work—a place where we have absolutely no choice but to steer by abstract ideals. That place is the climate.

The terms of the climate change conundrum aren’t set by contending ideologies, whose adherents can argue till the end of time about whether tax cuts create jobs or kill them. In the case of global warming, chemistry rules, which means there are lines, hard and fast. Those of you who remember your periodic table will recall how neat that can be. There’s no shading between one element and the next. It’s either gallium or it’s zinc. There’s no zallium, no ginc. You might say that the elements are, in that sense, abstract ideals.

So are the molecules those elements combine to form. Take carbon dioxide (CO2), the most politically charged molecule on Earth. As the encyclopedia says: “At standard pressure and temperature the density of carbon dioxide is around 1.98 kg/m3, about 1.5 times that of air. The carbon dioxide molecule (O=C=O) contains two double bonds and has a linear shape.” Oh, and that particular molecular structure traps heat near the planet that would otherwise radiate back out into space, giving rise to what we call the greenhouse effect.

As of January 2008, our best climatologists gave us a number for how much carbon in the atmosphere is too much. At concentrations above 350 parts per million (ppm), a NASA team insisted, we can’t have a planet “similar to the one on which civilization developed and to which life on earth is adapted.” We’re already past that; we’re at 390 ppm. Which is why 2010 will be the warmest year on record, almost a degree Celsius above the planet’s natural average, according to federal researchers. Which is why the Arctic melted again this summer, and Russia caught fire, and Pakistan drowned.

So here’s the thing: Just as in Copenhagen, Obama’s delegation in Cancún has been arguing for an agreement that would limit atmospheric concentrations of CO2 to 450 parts per million, and the cuts they’ve been proposing might actually produce a world of about 550 parts per million.

Why have they been defying the science? The answer isn’t complicated: because it’s politically difficult. As chief negotiator Todd Stern said last year in Copenhagen, “We’re very, very mindful of the importance of our domestic legislation. That’s a core principle for me and everyone else working on this. You can’t jeopardize that.”

In other words, if we push too hard the Senate will say no, and the oil companies will be really, really pissed. So we’ll take the easy way. We’ll negotiate with nature, and with the rest of the world, the same way we negotiate with the Republicans.

It’s completely understandable; in fact, it’s even more understandable now that the GOP has increased its muscle in Congress. In that context, even the tepid text drafted in Cancún goes too far. Four Republican Senators sent Obama a letter earlier this month telling him to stop using any foreign aid funds to tackle climate change. If I were Obama I’d want to make some kind of deal, and consider any deal as the start down a path to better things.

The problem, again, is the chemistry and the physics. They don’t give us much time, and they’re bad at haggling. If we let this planet warm much longer, scientists tell us that we’ll lose forever the chance of getting back to 350. That means we’ll lose forever the basic architecture of our planet with its frozen poles. Already the ocean is turning steadily more acidic; already the atmosphere is growing steadily wetter, which means desertifying evaporation in arid areas and downpour and deluge elsewhere.

Political reality is hard to change, harder than ever since the Supreme Court delivered its Citizens United decision and loosed floods of more money into our political world. But physics and chemistry are downright impossible to shift. Physics and chemistry don’t bargain. So the president, and all the rest of us, had really better try a little harder. The movement we’ve launched at 350.org has spread around the world, but it needs to get much stronger. Because this one time, in the usually messy conduct of human affairs, reaching an abstract ideal is our only hope.

Bill McKibben is Schumann Distinguished Scholar at Middlebury College and founder of 350.org. His latest book is Eaarth: Making a Life on a Tough New Planet. He recently was awarded the prestigious Puffin Prize. To listen to a TomCast audio interview in which McKibben discusses various kinds of global-warming denial, click here or, to download it to your iPod, here.