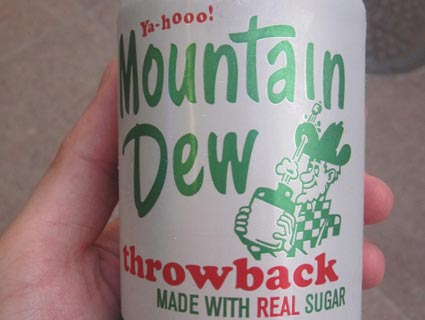 It’s been ages since I’ve reached for a Mountain Dew, but when PepsiCo introduced its Throwback line of “retro” sodas in 2009, I was tempted. Its “real sugar” sweetener seemed much more appealing than the high-fructose corn syrup that’s been ubiquitous in sodas since the mid-1980s. Clearly, I wasn’t alone. Catering to the sensibilities of the marketplace, Starbucks, Snapple, Kraft, and food giant ConAgra have all recently ditched HFCS in favor of sugar. This sea change hasn’t escaped the notice of the Corn Refiners Association. Last September, after blowing more than $30 million on ads aimed at saving corn syrup’s faltering rep (if you think HFCS is any worse than sugar, “You’re in for a sweet surprise!”), the trade group finally threw in the towel and petitioned the FDA to let it rebrand its product as “corn sugar.”*

This earned the refiners plenty of flak, but you can hardly blame them for trying. After years of flogging by nutritionists and foodies, HFCS has become, well, a four-letter word. This wasn’t always so. Back in the ’70s, table sugar (a.k.a. sucrose) was the bad guy. People associated it (rightly) with tooth decay and diabetes, whereas fructose, the predominant sugar in fruit, seemed a more natural option. Gary Taubes, author of the nutritional bestseller Good Calories, Bad Calories, explains that manufacturers of items like Snapple and sweetened yogurt didn’t want sugar in the first few ingredients, because it made their products appear unhealthy. So corn-syrup marketers capitalized on fructose’s good reputation, and by the ’80s, food and beverage manufacturers were switching to HFCS in droves.

Now the pendulum has swung back: Corn syrup is the demon, while sugar (sometimes cleverly disguised as “evaporated cane juice”) is back in vogue. But all this back-and-forth makes little sense since, nutritionally speaking, the two sweeteners are practically identical. Yes, fructose is bad for you. (More on that later.) But every nutritionist I spoke with agreed that table sugar—a molecule composed of one part fructose to one part glucose—is no better, really, than food-grade HFCS, which contains the same ingredients in a roughly 55/45 ratio. The main distinction is that the fructose and glucose units are joined in sugar and detached in corn syrup. But since the small intestine promptly breaks that bond, it doesn’t matter.

Most common sweeteners, including many fruit-juice concentrates, cane juice, maple syrup, and honey, have a fructose-to-glucose ratio around 50/50. Notable exceptions include brown rice syrup and kitchen corn syrups like Karo, which contain no fructose, and certain kinds of agave nectar—which contains up to 92 percent fructose. (Agave is the sweetener du jour for the Whole Foods crowd, thanks in part to its low glycemic index—which measures how fast your blood sugar spikes after you eat a given food.)

Unlike glucose, which the body stores in various tissues for use as fuel, fructose is sent to the liver for processing. Robert Lustig, a pediatric endocrinologist at the University of California-San Francisco, has shown that it causes a buildup of fats there, triggering a host of health problems including diabetes, gout, and heart disease. Most worrisome, Lustig says, it can lead to insulin resistance, a hormonal snafu that makes you feel hungry even when you’re full. “The way fructose is metabolized leads you to want to eat more,” he explains—no great revelation to anyone who’s ever slain a pint of Ben & Jerry’s in one sitting.

Prior to 1900, about 4 percent of America’s calories came from fructose, while today’s teens get roughly 12 percent of their calories that way. Since sugar and corn syrup are equally efficient as fructose delivery vehicles, the obvious conclusion is simply that we’re consuming too many sweets. As for the HFCS-vs.-sugar smackdown, you might as well debate whether whiskey is healthier than rum. “In high-enough quantities, they’re both poison,” says Lustig.

Some nutritionists have even argued that fructose should be regulated like a drug. Good luck with that. In 1986, around the time the beverage industry switched over to corn syrup, the FDA convened a task force to assess various sweeteners—including sugar and HFCS. It concluded that sugars “do not have a unique role in the etiology [origin] of obesity,” and the issue of regulation hasn’t come up since. (The report’s lead author, Walter H. Glinsmann, is now a paid consultant for the Corn Refiners Association.)

Being against sweets “is like being against Christmas,” Lustig concedes, but the Big Gulp portions and child-oriented marketing are bad news; Similac now sells a heavily sweetened infant formula, and a 2005 study linked obesity in Harlem toddlers to WIC-subsidized juice. A new study in the journal Obesity suggests that some beverage makers may even be using souped-up HFCS formulas. University of Southern California researchers analyzed sweet drinks from L.A. markets and fast-food joints, and found several (namely bottled Pepsi, Coke, and Sprite) with fructose-to-glucose ratios approaching 65/35—a result yet to be replicated widely.

Lustig recommends that the average adult consume no more than 50 grams of fructose per day—about five Mrs. Field’s chocolate-chip cookies—and preferably not all at once. A 20-ounce soda containing 37.5 grams of fructose is “going to be a shock to the liver if you drink it all in one sitting,” he says. Ideally, your fructose should come with plenty of fiber, which slows its entry into the bloodstream. One place where the two are ingeniously packaged together: an apple. Talk about a throwback.

Corrections appended: An earlier version of this article stated that the Corn Refiners Association petitioned the USDA to be allowed to change the name of HFCS to corn sugar. It actually petitioned the FDA. An earlier version of this article said that USC researchers who analyzed sodas in supermarkets found fructose-to-glucose ratios approaching 65/45. It should have read 65/35.