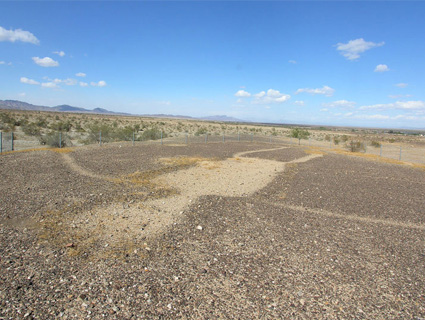 One of the Blythe Intaglios, safely fenced off from solar plant intrusion.<a href="http://en.wikipedia.org/wiki/File:Blythe_Intaglio_(4858).jpg">Ron's Log</a>/Wikimedia Commons

Alfredo Figueroa, an elder in the Chemehuevi tribe, has spent all of his 77 years in the Sonoran Desert town of Blythe, next to the Colorado River in southeastern California. But now, he’s worried burial grounds and giant etchings in the earth that are sacred to his people could soon be replaced by giant solar panels. It’s part of the unprecedented expansion of solar power into California’s deserts, a key piece of President Obama’s push to make energy production 80 percent “clean” by 2035. Late last year, Figueroa filed suit to stop the 7,000-acre solar plant being built outside his hometown, along with five others approved for public lands.

The litigation was the latest in a series of lawsuits protesting the federal government’s expedited cultural and environmental review of solar project sites. It contends that the Bureau of Land Management (BLM), in a rush to qualify projects for Obama’s stimulus fund deadline (since extended to the end of this year), failed to adequately consult with tribes and properly identify at-risk ecosystems and sacred lands to avoid. A self-taught historian, Figueroa believes that the sands and hills outside Blythe are especially sacred: After reading a book his uncle gave him half a century ago, he became convinced that the fabled Aztec ancestral lands of Aztlán sat there.

One of Figueroa’s sympathizers once told a reporter that researchers would quickly dismiss “some little old man from the desert telling them he’s found Aztlán.” (Speculation about where the lands are runs from central Mexico to Wisconsin, but there’s no clear consensus that they exist at all.) But it would be a mistake to sell the man short. In the mid-’70s, he helped kill the Sundesert Nuclear Power Plant that was to go up southwest of Blythe. He launched a successful eight-year effort in 1992 to stop a proposed nuclear waste dump in the Mojave Desert. After that, he fought to win official recognition for hundreds of cultural sites along the Colorado River.

A study last year by the California Energy Commission (PDF), which grants permits to large-scale solar plants, found 17,000 cultural sites—not all indigenous—in the southern California desert that “will potentially be destroyed” by past, present, and future construction of various sorts. (That number is probably larger today, the CEC says.) BLM archeologist Rolla Queen defends the government’s review process, but admits that the dozens of solar proposals and projects in the desert region are “a little overwhelming.” Not since the days of the major dam-building projects of the 1920s and ’30s has the country seen public-land construction on this scale, he says. It shows: Overstressed government workers scramble to review new proposals while continuing to monitor sensitive areas at approved sites. Environmental groups are even more strapped for resources, and tribes often don’t have any legal staff at all.

While efforts are made to recover ancient artifacts, the excavation sites aren’t usually considered protection-worthy by government standards. But a good-faith effort to conduct a nation-to-nation consultation with federally recognized tribes, which have sovereign status, is mandatory. Last December, a federal judge imposed a temporary injunction on a project in Imperial Valley because in its review process, the government blew off the Quechan tribe of the Fort Yuma Reservation. (If built to its original specs, the project would engulf more than 6,000 acres of desert by the Mexican border, including habitats of the revered horned toad that is part of the tribe’s creation story.)

“That’s pretty strong medicine,” says Patrick Parenteau, a professor at Vermont Law School. “The judge said, ‘I’m not going to be swayed by arguments that say you can’t do this, you’ll kill the project.'” Instead, the judge said that the government should have considered the consequences beforehand. The company ended up selling the project to AES Solar, which appears to be waiting until the lawsuit is resolved before proceeding with any plans. Whatever the outcome, Quechan tribal elder Preston Arrow-weed will remain uneasy. “There’s places all over Imperial County where they plan to put these projects,” he says. “And it’s right over sacred sites.”

Figueroa’s challenge faces longer odds. Unlike the Quechan lawsuit, his is filed through his nonprofit, La Cuna de Aztlán Sacred Sites Protection Circle (PDF), rather than his tribe. (Of the dozens of desert tribes, so far only the Quechan has sued.)  That means his frustrations over the consultation process will likely be a non-starter, Parenteau says, because he lacks the sovereign governmental standing of the tribe itself. Charles Wood, the Chemehuevi tribal chairman, says that he has “wide-ranging concerns” about the project outside Blythe, including the eyesore and noise it will surely create. But he says that the company has heard him out and the tribe probably won’t sue. “We may have pushed it as far as we can to this point,” he says.

Because Solar Millennium, the company that owns the Blythe project, has circumnavigated some of the area’s most sacred sites in its ongoing construction, Figueroa’s other legal challenges there could be a tough sell, too. Ground etchings known as the Blythe Intaglios are fenced off, protected by federal law. The company agreed to avoid two other intaglios, of the Kokopelli fertility and Cicimitl afterlife deities, which Figueroa believes are thousands of years old but the BLM says are clearly less than 50 (which would make legal protection harder to come by). Still, the Chemehuevi people, like the Aztecs, were migratory, and burial grounds and other cultural sites are scattered throughout the desert. Certainly, Figueroa reasons, that includes the lands on which the six solar plants he’s suing are approved.

Some of the five other solar projects in Figueroa’s lawsuit could be tripped up by environmental litigation, even if his own efforts don’t make headway. The Sierra Club has launched a strong case against the CEC over review of the Calico project, now owned by K Road Power, in the Mojave (the CEC has an impressive track record at the state Supreme Court, however). The smaller Western Watersheds Project, concerned about the threatened desert tortoise, sued the federal government over the Ivanpah project, also in the Mojave. And the California Unions for Reliable Energy sued the BLM over the Sonoran-based Genesis project, arguing it would make improper use of water from a Colorado River aquifer.

People familiar with the Quechan’s Imperial Valley injunction say that energy companies and the BLM have learned their lesson. But to some Native Americans, that just means they’ll try harder to avoid lawsuits, sometimes by trying to save face after their projects have already won approval. “More and more, the BLM is in a position of throwing out this term ‘mitigation,'” Wood says, “not necessarily looking to tribes to stop the process, but what are the tribes’ problems so we can get around them?” Dave Singleton, who works for California’s Native American Heritage Commission, says that the BLM has not always respected tribal customs including the oral history of tribal elders who, like Figueroa and Arrow-weed, aren’t always members of their tribal councils. “We’re not against renewable energy,” Singleton says. “But it’s a matter of smart development, not just bulldozing through pursuant to an engineer’s drawing.”

Figueroa calls the influx of big solar the worst affront to tribes “since the coming of Cortés.” Whether it’s the latest theft of land from Native Americans or a renewable energy renaissance (or something in between), the continued construction of large-scale solar power plants in the southern California desert region seems for now like an inevitability. But Aztlán’s protector won’t submit. Figueroa promises, “This is a big, long battle that we’re going to undertake.”