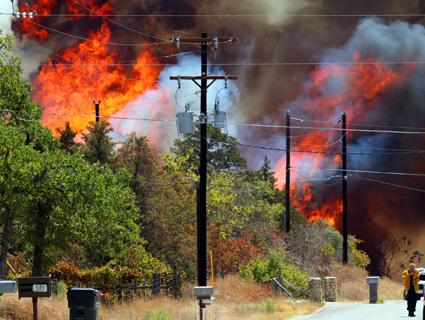 Fire raged in a neighborhood near the west end of Bastrop, Texas, on September 5.John Davenport/San Antonio Express-News/Zuma

On Monday, Texas Gov. Rick Perry left the presidential campaign trail in South Carolina to attend to the most destructive wildfire in his state’s history. Touring the flames in Bastrop, which has lost 600 homes to the blaze, he urged people to be “incredibly careful” because “people’s lives, pets, livestock, and frankly, legacies of generations to come can be put in jeopardy.” Perry was warning against sparking fires with cigarette butts, but not, it would seem, against sparking them with his own risky brand of climate change denial.

According Jianbang Gan, an environmental science professor at Texas A&M University, global warming is strongly tied to an increase in wildfires. He predicts that if the temperature climbs by 7 degrees Fahrenheit—what climate experts predict for Texas by the end of the century—the number of wildfires will more than double. Increased concentrations of CO2 in the atmosphere will cause plants to grow faster, while higher temperatures will dry them out more quickly, setting the stage for the kind of intense blazes that have consumed 3.5 million acres in the Lone Star State this year.

The direct causes of this year’s wildfires are a record-breaking heat wave and the worst single-year drought in state history, which is itself linked to climate change. The drought has been the result of storms shifting northward—the same conditions predicted by climate change models. Though it may also be caused by the naturally occurring La Niña weather pattern, human-induced global warming “is almost certainly making this extreme event worse,” Texas A&M climate scientist Andrew Dessler told ThinkProgress Green. “There is absolutely no way that you can conclude that climate change is not playing a role here.”

George H. Ward, a research scientist at the University of Texas Center for Research in Water Resources, predicts that global warming could spell disaster for the state’s water supply. Population growth alone would make coping with a multi-year drought like the one Texas experienced in the 1950s “extremely difficult,” he writes. But when you factor in the midcentury effects of climate change, which he predicts will reduce flows in rivers and streams by an additional 42 percent under drought conditions, “the situation is even more serious.”

And that’s not all. “Temperatures will rise; heat waves will occur more frequently; there will be less rain west of the Interstate 35 corridor; severe weather will become more frequent; in-stream flows will fall; biodiversity will decline and the sea level will rise,” writes Jurgen Schmandt, the editor of The Impact of Global Warming on Texas.

Climate change is already exacting a steep economic price on the Lone Star State. The Texas Agrilife Extension Service estimates that this year’s severe drought will cause $5.2 billion in losses to farms and businesses. By 2030, climate change will cause $3.6 to $6.5 billion in agricultural losses just in the Edwards Aquifer zone around San Antonio, according to (PDF) the Center for Integrative Environmental Research (CIER). A 2009 study by the Environmental Defense Fund estimates (PDF) that a 1.5 meter rise in sea level in the Galveston Bay region near Houston will displace 98,000 households and impact 75,000 buildings at a cost of $12.5 billion. CIER predicts that climate change will hit the Texas Gulf Coast harder than other parts of the country as a result of its population growth and its natural resource-intensive economy.

Yet despite these threats, Perry has done worse than nothing to tackle the climate problem. In his book Fed Up!, Perry calls the scientific consensus around man-made global warming “all one contrived phony mess that is falling apart under its own weight.” In a 2007 appearance in California, Perry said, “I’ve heard Al Gore talk about global warming so much that I’m starting to think that his mouth is the leading source of all that supposedly deadly carbon dioxide.” During the GOP presidential debate last night, Perry again stressed that climate science “isn’t settled.”

To be sure, Perry must abide his state’s fossil fuel industry, which has given his campaigns $11 million since 1998. But Texas environmentalists say that native sons such as T. Boone Pickens and the state’s own burgeoning wind power industry have given Perry some room to occupy the middle ground on climate issues. The problem is that Perry’s stuck in the past, says Ken Kramer, the head of the Sierra Club’s Lone Star Chapter: “The long term interests of the state of Texas and its people and its economy are basically being betrayed by the governor.”