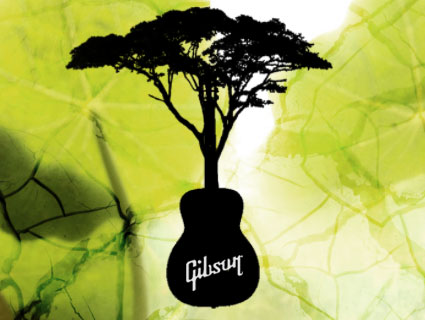 Do you have a sweet six-string? Should you be worried that it might include pieces that were illegally logged in a Malagasy rainforest, or snuck into the United States under false pretenses? Some recent federal enforcement efforts against the guitar maker Gibson suggest that contraband wood might still be finding its way into instruments, despite a prohibition.

In late August, the US Fish and Wildlife Service raided two of the company’s Tennessee locations, in search of illegally imported wood. It was the second time in as many years that the company had been targeted for violations of the Lacey Act, a law that bans the import and sale of illegal wood products.

The first time the feds raided the company was in November 2009, when they seized a shipment of ebony from Madagascar used to make fingerboards. The August 24 seizure focused on ebony and rosewood from India. According to an affidavit from the US Fish and Wildlife Service, the wood was mislabeled to hide the fact that it it was a type of wood that, under Indian law, is not supposed to be exported from the country. [UPDATE: Natalie Swango, general manager of Luthiers Mercantile International Inc., a domestic importer that Gibson was working with, says that the broker they were working with “mistakenly listed the wrong tariff code on the entry paperwork” and that they have sent USFWS a letter explaining the mistake.]

Now here’s where it gets weird: Over the past few weeks, Republicans in Congress have sought to make the CEO of Gibson Guitar the poster boy for government overreach. House Speaker John Boehner invited Gibson CEO Henry Juszkiewicz as his guest for the president’s jobs speech earlier this month. Tea partiers are holding a “We Stand With Gibson” rally next month. Another House Republican has accused the Obama administration of acting “like a bunch of cowboys” in the raid. Conservative politicians have also been ginning up fears that the feds would come confiscate the guitars of unwitting rock stars and arrest them (they won’t, as the Department of Justice and the Department of Interior emphasized in a letter last week). All of it seems to miss the fact that the company was apparently violating a law against illegal logging that Congress passed on a bipartisan vote just three years go.

The Lacey Act was first passed in 1900 to prevent the illegal trade of wildlife, fish, and plants. In 2008, Congress updated the law to included wood and wood products (and other plants) that were obtained or sold illegally. The law requires companies that import or export wood to follow the laws of the United States and the country where the logging took place. Rep. Earl Blumenauer (D-Ore.) was the sponsor of the bill, but he had 10 Republican cosponsors on it, the support of the Bush administration, and widespread business backing. It was popular precisely because it was billed as a way to protect American logging companies and manufacturers from unfair competition from illegally logged timber.

“We had the whole hardwoods industry, we had labor support, environmental support, NGOs,” Blumenauer told Mother Jones. “We heard from small manufacturers, talking about how business in the US could not compete with bandits in China using illegally harvested timber.”

Last week, the World Future Council recognized the 2008 Lacey Act amendment with an award for being an exemplary policy solution. Other countries have modeled their laws on the US version. And it has helped contribute to a 22 percent decline in illegal logging around the world in the past decade.

But Juszkiewicz has gone on the offensive against efforts to enforce the law, accusing the government of “bullying Gibson without filing charges.” He claims that the crackdown is jeopardizing jobs and costing money, and he has started an online petition to President Obama to defend the company.

While guitar makers are certainly not the biggest buyers of wood in the US, they do import some of the rarest and highest-quality woods. And quality guitars are both an expensive purchase and an emotional one, and the subject gets people a lot more riled up than, say, an illegally sourced wooden toilet seat. Which is why what Gibson has to say about the Lacey Act gets a lot of attention.

But this isn’t the first time that Gibson has been targeted for Lacey Act violations. On both of the occasions in question, Gibson was dealing with the same German wood supplier. Perhaps the first raid should have been a warning? What’s more, the Lacey Act makes it clear that buyers are expected to take “due care” to ensure that they are not receiving illegally sourced products. Information released so far suggests that the federal government believes that Gibson either did not undertake adequate measures to ensure that, or if it did, then it ignored problems.

And Gibson appears to be an outlier in the industry. Last week, other guitar makers and groups like the Hardwood Federation (the country’s largest forest product association) and the National Hardwood Lumber Association (the industry trade group) pushed back on Gibson’s claims in a conference call with reporters. They argued that the Lacey Act has actually been beneficial for American companies, while putting in place standards to prevent illegal logging.

“We can be musicians, and we can be businessmen and users of wood, but we all have to work together,” said Charlie Redden, the supply chain manager at Taylor Guitars. “We believe this is a way to control the demand side of illegal logging.”

It’s not just an environmental concern, either, said Scott Paul, director of the forest campaign at Greenpeace US. When it comes to illegal logging, he said, “we’re [often] dealing with a part of the trade that is well documented as some of the worst of the worst organized crime, money laundering, arms trade, drugs trade, slavery.” The act is designed to support the rule of law, particularly in countries that are unstable or that have a strong criminal element.

All this makes Gibson’s complaints about the law seem more than a little out of tune.