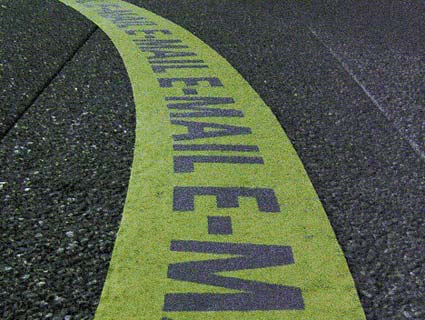 The new round of hacked emails from climate scientists floating around the internet hasn’t generated the same buzz as the last iteration—at least not yet. But in certain circles, it’s playing out much like the first batch of emails did in 2009. In addition to the tranche of emails, the poster included a list of “greatest hits”—short quotes from the emails taken out of their context that are intended to paint scientists as scheming or lying. The entire batch was quickly posted in searchable format on another site.

Climate Depot, the denial site run by Marc Morano, quickly jumped all over it, boasting headlines claiming the emails confirm a “pattern of deception and collusion by alarmists” and a comic that that reads “Same cast, same story, same secrets … Will they survive this time?” Morano’s page is also touted over on the National Review‘s Planet Gore blog, along with a bunch of other coverage of “Climategate 2.0.”

It’s since also traveled up line to conservative commentators at the UK’s Telegraph and Hot Air. And of course, it’s getting covered at Fox News, which declared that the emails were “certainly eye-opening” before listing some of the quotes selected by the original poster.

More interesting to me is whether mainstream journalists will tread more cautiously this time than they did last in covering the emails. In 2009, most reporters just ignored it, and then, when they did bother writing about it, used the out-of-context quotes without taking the time to read the entire exchange or understand the science discussed therein. So, has the press done better this time? Not quite.

ABC News just rehashed a bunch of he-said, she-said about it, rather than actually reporting. Media Matters took several reporters to task for unquestioningly repeating the out-of-context lines. That includes the Washington Post‘s story, which mentions an email from Peter Thorne, a scientist now with NOAA’s National Climatic Data Center. Thorne expressed concern about the science behind a portion of an Intergovernmental Panel on Climate Change report on temperatures in the lower atmosphere. The Post’s original story online Tuesday did not mention that the email is from February 2005 and referred to an early draft of the IPCC report, nor that the final version of that report was changed to reflect Thorne’s feedback when it was released in 2007. (I sent an email to Thorne to get more context on the exchange and its resolution, but got an out-of-office message from him.) The Post did correct the print story to include the dates, but the piece still quotes Morano and Congressional climate skeptic Jim Sensenbrenner (R-Wisc.) gloating over the fact this proves scientists are all a bunch of liars who can’t be trusted.

The Associated Press story on the new emails was particularly atrocious, noting that they “threatened to cause similar embarrassment” to the 2009 version which “caught prominent scientists stonewalling skeptics and attacking opponents in vitriolic terms.” A longer version of that story that has appeared online also states that, while the reporter hadn’t read the full emails, “the excerpts appeared to show climate scientists talking in conspiratorial tones about ways to promote their agenda and freeze out those they disagree with.”

The New York Times piece dinged scientists for “catty remarks” and included a quote from the well-known Competitive Enterprise Institute skeptic Myron Ebell claiming that these emails are further proof that scientists “engaged in a conspiracy to provide a scientifically misleading assessment.” But at least the Times bothered to try to learn the context for some of the emails and talk to the scientists involved, and notes the numerous exonerations of the science and scientists following the first release.

The Guardian probably did the best job, making it clear that the quotes are “cherry-picked.” But like the first go-around, a lot of the coverage falls back on the “scientists say this … but skeptics say this” model of coverage that the press is so happy to follow, rather than actual reporting. We’ll be following the story as it continues to develop. But given the fact that the subject of climate change is getting less coverage in general these days, I’m guessing it won’t get the traction it did two years ago.