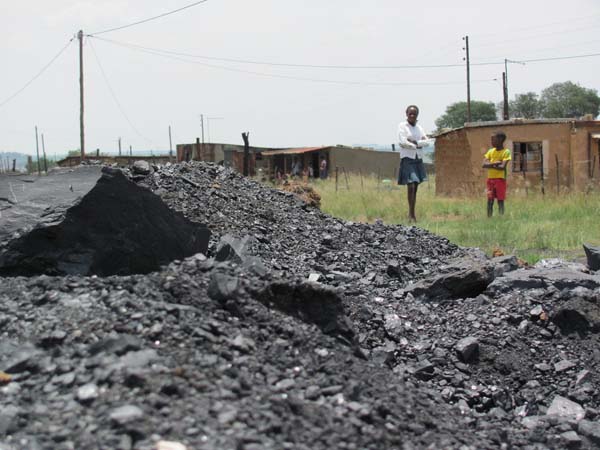 Earlier this week, I traveled to South Africa’s Mpumalanga province, the center of the country’s coal industry and the home of one of the newest coal-fired power plants, Kusile. Most Americans would probably be surprised to learn that their tax dollars have been used to underwrite Kusile, but they are. And when completed, the 4,800-megawatt plant will be among the largest in the world.

EMalahleni, the municipality in which Kusile is located, means “place of coal” in Zulu. Ninety-three percent of South Africa’s power comes frmo coal, and much of that is produced and burned in Mpumalanga.* While much of it is burned in the region’s 11 power plants, 25 percent of it is exported to other countries. South Africa is the fifth-largest producer of coal in the world, and 80 percent of its mining takes place in this province.

A significant chunk of Kusile’s upfront financing—$805 million—came from a direct loan from the Export-Import Bank of the United States to Eskom, South Africa’s state-owned electric power utility. Construction on the plant began in 2007 and is expected to be completed in 2015. In April 2011, ExIm agreed to provide the loan to the plant to help ensure its construction. Kusile will be the 12th coal-fired power plant in this area, which lies to the east of Johannesburg. 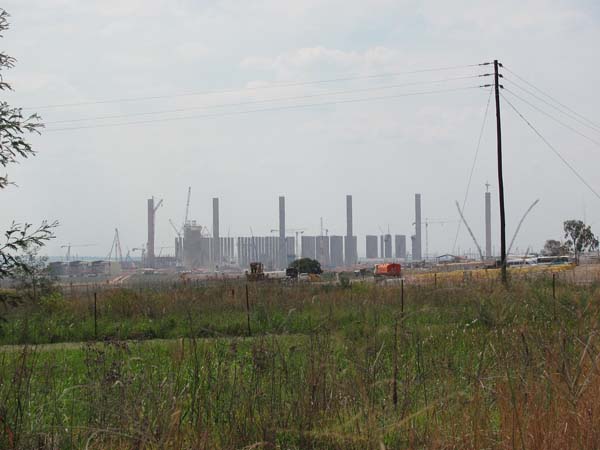 The Kusile power plantThe region is also home to the Sasol plant in Secunda, which is both the largest coal-to-liquids plant and the largest point source of greenhouse gas emissions in the world. The plant produces 160,000 barrels of fuel from coal every day, which is used to power buses, planes, and automobiles in the country. 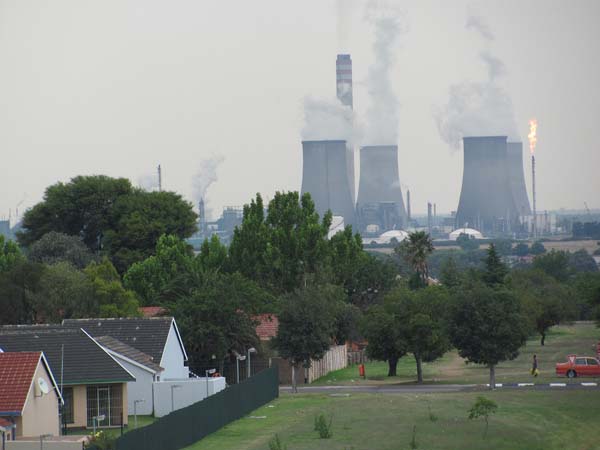 The Sasol coal-to-liquids plant in Secunda

The South Africa-based environmental group Groundwork reported that in a single four-month period last year, the country exceeded its ambient air pollution standards 570 times—mostly due to the emissions from plants in this region. The national air quality law, which was passed in 2004, is actually pretty good, says Groundwork director Bobby Peek, “but government doesn’t have the capacity to enforce it.” There are fines for violating the law, but in an area with numerous plants like Mpumalanga, it can often be hard to peg the violations to one particular plant.

Peek was my guide earlier this week for a trip to the region. The first plant we see is the Kendal power station, also owned by Eskom. Its six generators have made it the largest station in the country since it was completed in 1993, but Kusile will be even bigger. 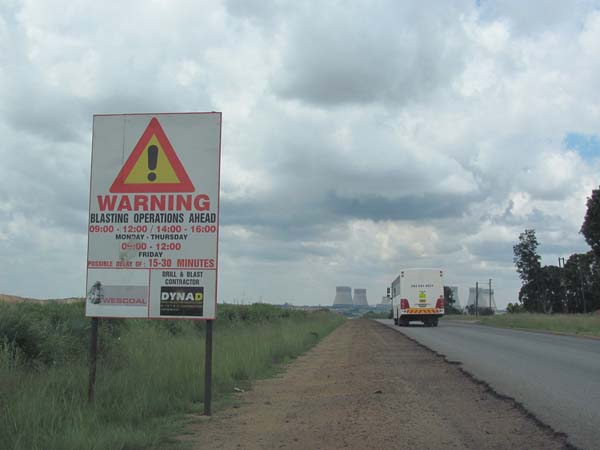 As we head away from Johannesburg, he opens the car window. “You’ll start smelling sulfur now,” he says. We’re driving through cornfields, the air quality in the region is more like that of a big city.

Down the road, we meet up with our local guide for the day, a 27-year-old woman who lives near one of the region’s many mines that feed all those coal plants. She, her three siblings, and her two small children live in a small house made of wood and mud not far from where a new mine was opened in February 2010. She’s lived there since 1997, but now the blasts from the mine are causing her house to crack, slowly. She’s nervous about me using her name in my article, or that of her community. It’s a small place, and these topics can be sensitive.

Throughout her neighborhood, there are large piles of “bottom of the barrel” coal—the stuff the company couldn’t sell—dumped along the road, left for people in the community to use to cook or heat their homes:

“They promised jobs. They promised projects,” she says. “But now, no jobs, no projects.” Maybe six people in the town have been hired to work in the mine, she says. The rest of them just got a giant hole in the ground.

A manager at the mine is kind enough to show us around. They’re shipping out 120 tons of coal per month, he says, which is pretty small compared to others in the area. The manager says they’re looking to increase their output, to 200 tons. He points out two thick coal seams that ring the gaping open pit mine. He estimates they’ll be mining here for another 12 to 15 years, before moving on. As we talk, massive coal trucks rumble by, carting the coal away. Eskom estimates that another 15 mines will need to be dug in the Mpumalanga province by 2015 to feed the numerous power plants. The government estimates that there is a 50-year supply of coal remaining in the country. 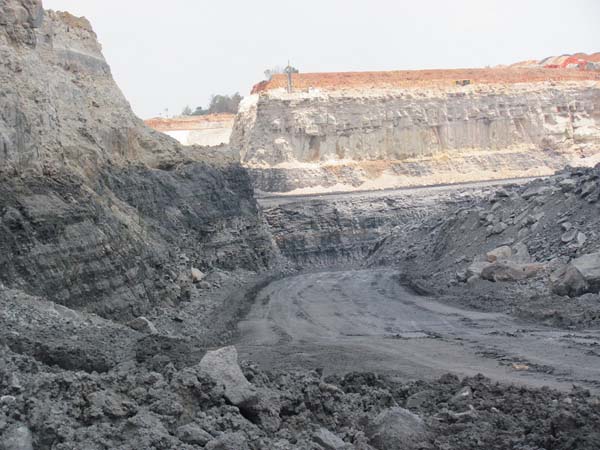 This is an open cast mine, with giant roads carved into the landscape. This mine exports 120 tons of coal per month, according to the manager.After visiting the mine, we continue toward Kusile. There’s a constant stream of construction vehicles turning off the main road and onto the long dirt road to the plant. We don’t make it very far before a guard stops up. We’re still probably a half mile from the plant, but he says we can’t go any closer. And we can’t take any photos. Soon a fleet of managers and security guards descends upon us, insisting that we delete any photos we may have taken of the plant.

One guy in a bright yellow vest that reads “Eskom Project Manager” tries to take my notebook. Rather than any additional confrontation, we leave—and are followed back to the highway by guards. Or “Eskom goons,” as Peek puts it.

Groundwork and other groups challenged the construction of Kusile, both over air quality concerns and because they don’t believe the plant will help address a lack of energy for many South African citizens. Two and a half million people, a full 17 percent of South Africa’s population, don’t have access to electricity currently. Energy prices are high for private homes, and many can’t afford it. Industrial consumers, however, have reached long-term pricing agreements with the South African government to get power at low prices, as low as 2 cents per kilowatt hour. 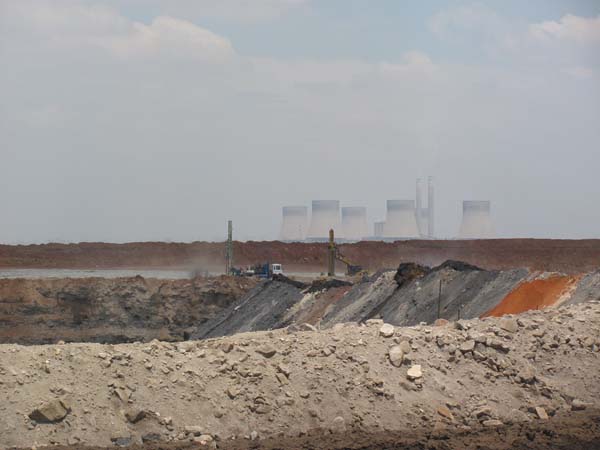 Yet another power plant, as seen from a nearby mine. Eskom, which owns the plant, estimates that 15 additional mines will be needed in the region by 2015 to supply coal to the plants.Peek says the average person probably pays more than seven times the rate industry pays, and the price of electricity has been on the rise.

The ExIm Bank, the US entity that provided the loan to build Kusile, is the official export credit agency of the US government, authorized and funded by Congress. Its mission is to support projects that will create US jobs, through loans to support business ventures that would increase exports of US products. In the case of Kusile, the loan was provided so that Eskom could hire the Kansas-based engineering and construction management company Black & Veatch International. But it’s not entirely clear how many jobs that construction of this plant will create in the United States; the ExIm press release claimed “hundreds of highly-skilled American senior engineers and support personnel” would be employed by providing goods or expertise for this project, but no more specific figures have been put forward.

In March, Eskom reported that the company was responsible for 230.3 million metric tons of carbon dioxide emissions in the previous year, accounting for 45 percent of South Africa’s total emissions. Environmental groups in both South Africa and the United States, accordingly, have raised questions about whether it is prudent then to support yet another coal plant in the country, already the biggest emitter in Africa by far. Kusile’s supporters argue, however, that the plant is more efficient than others and that it will include the first sulfur dioxide scrubbers in the country. Still, the plant is expected to release an additional 36.8 million tons of emissions per year.

US-based environmental groups have been highly critical of the loan, especially as ExIm has a formal carbon policy (put in place after enviro groups sued the bank) that calls for the bank to support more renewable energy projects, disclose the carbon impact of its projects, and to “be a leader on these issues whenever possible.”

In 2010, the World Bank also approved a $3.75 billion loan to Eskom loan to build Medupi, another 4,800-kilowatt coal-fired power plant farther north in South Africa. In that instance, though, the United States abstained from voting on the loan, citing concerns that it lacked “a plan to ensure there is no net increase in carbon emissions.” But a year later, the government’s export credit agency approved a nearly identical project in Kusile. (Neither ExIm nor Eskom had responded to a request for comment at the time this went to press.)

For now, Peek says his group has accepted that both Kusile and the World Bank-backed Medupi plant will be built. “The challenge we have now is to make sure no more are built,” he says, and that South Africans can have “equitable and fair access to energy” in the future.

The entire trip, however, made me realize how entrenched coal is in South Africa—perhaps even more than it is in the US. We drove around in a car powered by fuel that was likely made from coal. The country is even using coal fuel to power airplanes in the country. And for the next 50 years at least, it will probably stay that way.

* Sentance has been corrected.