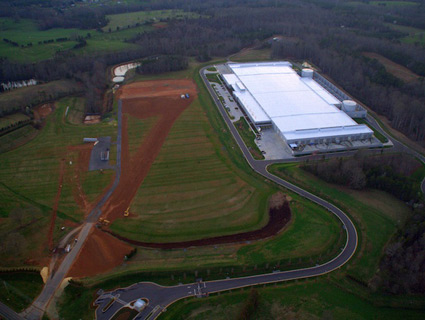 This story was produced by Wired as part of the Climate Desk collaboration. Earlier this month, Climate Desk staffers James West and Tim McDonnell traveled to Maiden, North Carolina for a close-up view of Apple’s giant new data center.

The utility company that supplies power to Apple’s Maiden, North Carolina, data center has pulled a paper from its website that bragged about Apple’s energy-guzzling ways.

The paper was a puff piece talking about the reasons that Apple chose to hook its iCloud data center up to Duke Energy’s power grid. It lays out the backstory of an Apple lobbying effort, dating back to 2006, that ultimately landed a 500,000-square-foot data center—code-named Project Dolphin—in the wilderness of North Carolina.

“This was the best-kept secret in the data center world,” said Duke Energy Director of Business Development Stu Heishman, according to a copy of the report, which had formerly been located on a website run by Duke’s business development group.

The report also talks about Apple’s power consumption, a subject that has suddenly become controversial as Apple has come under fire for using too much energy from non-renewable sources at the Maiden data center. We don’t know why or when the report was pulled— reached Wednesday, Heishman said he didn’t remember the report—but some of the statements in the report seem to be at odds with Apple’s image of Maiden as low-power consumer.

“We fully expect Apple to be one of our top ten customers in the Carolinas,” Heishman said in the report.

Data center operators such as Apple are “the type of customer where the meter spins and spins at an exponential pace,” said Clark Gillespy, a Duke vice president of economic development, according to the report. “It may be the most ideal customer we could have.” Their top concerns include “power cost and reliability,” Gillespy said. “We were able to convince Apple that we were capable of providing the low cost and reliability they needed for their operations.”

That isn’t 100 percent on-message with Apple, who says Maiden will be “the greenest data center ever built,” gaining 60 percent of its power from on-site renewable sources.

Duke’s business development team has had a lot of success in North Carolina. It’s also attracted Google and Facebook to its cheap, reliable power grid.

Duke’s grid, which gets 98 percent of its energy from nuclear and coal plants, has also attracted the attention of Greenpeace, which calls this energy mix “one of the dirtiest in the country.” Last year, Greenpeace singled out Duke Energy, in its 2011 report saying that three companies with data-center projects in the area—Apple, Google, and Facebook—made up a “dirty data triangle.”

In fact, Greenpeace cherry picked Gillespy’s quote and highlighted it in its 2011 report. That may have upset some of Duke’s customers, says Gary Cook, an IT analyst with Greenpeace. “I could imagine why some companies wouldn’t want that to be out there so boldly,” he says.

Greenpeace slammed Apple again this year for going with Duke, but this time Apple fought back, saying that Greenpeace’s data consumption estimates were way off. On Tuesday, Greenpeace launched protests at Apple stores in San Francisco, New York, and Toronto.

But according to Cook, the real issue question is what will Apple do as it expands its Maiden facility. It has spent $500 million of a planned $1 billion on Maiden, which is home to Apple’s fast-growing iCloud backup service. If Apple expands the Maiden data center, will it continue to get 60 percent of its energy from renewable sources? Or will it simply go for the cheap coal-and-nuclear power from Duke?

Cook would like to see Apple commit to using renewable energy even as Maiden and its other data centers grow. That’s something that’s not going to happen overnight, but it’s possible, he says. After all, two of the other data center operators highlighted in Greenpeace’s 2011 report promised to use renewable sources for their future energy needs. “Both Google and Facebook have a real commitment to powering their platforms with renewable energy,” Cook says.