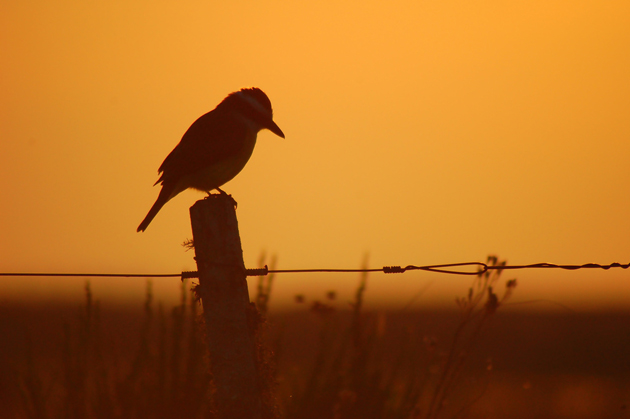 This story first appeared on the Scientific American website and is reproduced here as part of the Climate Desk collaboration.

Deforestation in the Amazon has put nearly 100 bird species at greater risk of extinction, the International Union for Conservation of Nature announced (IUCN) on Thursday. The news comes in conjunction with the release of the 2012 update on the world’s bird species for the IUCN Red List of Threatened Species, data for which is compiled and updated every four years by conservation group BirdLife International.

Among the species at risk in the Amazon are the now-critically endangered Rio Branco antbird (Cercomacra carbonaria), which was listed as “Near Threatened” just four years ago. According to BirdLife, the species has a very small range in Brazil and Guyana. The construction of new roads in the antbird’s habitat has made it easier to clear land for cattle ranching and soy production. According to current projections, the antbird’s habitat will disappear completely in 20 years.

BirdLife also downgraded the hoary-throated spinetail (Synallaxis kollari) from the same Rio Branco region of Brazil and Guyana from “Endangered” to “Critically Endangered.” The organization says the bird has just 206 square kilometers of suitable habitat, which could shrink 83.5 percent in the next 11 years.

In a prepared release about the Red List update, BirdLife blamed Brazil’s recently weakened Forest Code for increasing the rate of deforestation in that country. The new laws, a portion of which Brazil President Dilma Rousseff vetoed in May, lowered the amount of forested land that farmers and ranchers are required to keep on their properties. Leon Bennun, BirdLife director of science, policy and information, warned: “We have previously underestimated the risk of extinction that many of Amazonia’s bird species are facing.” He also said, “the situation may be even worse than recent studies have predicted.”

Only two species had their Red List categories improved in this update. One of them, the Rarotonga monarch (Pomarea dimidiata), has been upgraded from “Endangered” to “Vulnerable.” Endemic to the Cook Islands in the South Pacific, the monarch was down to its last 35 to 50 birds in 1983. Conservation efforts including a captive breeding program and the removal of alien predators such as black rats from the islands have increased the species’s population to around 380 individuals.

The other species with a category improvement was the Ua Pou monarch (Pomarea mira) of French Polynesia. Last officially recorded in 1985, the bird was listed as extinct in 2006. After an unconfirmed sighting in 2010, the monarch is now listed by the IUCN as “Critically Endangered (possibly extinct).” That’s not much of an improvement, but at least it is hope.