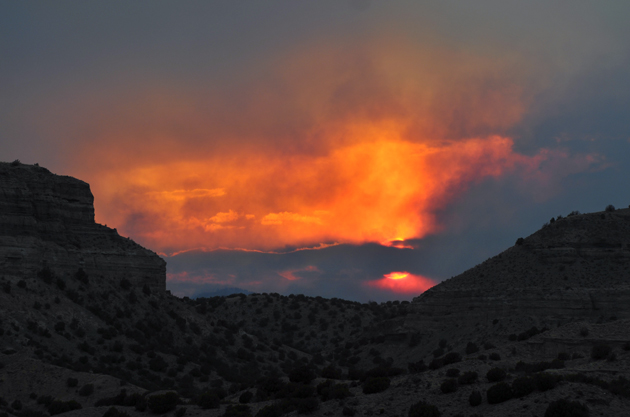 This article originally appeared in the Guardian and is being republished here as a part of the Climate Desk collaboration.

They pray for rain these days across a drought-stricken American West. The very idea—a light shower, even an inch of rain—fills Walter Dasheno with dread.

Dasheno is the governor of the Santa Clara pueblo, a Native American community living just below a canyon of the same name.

The survival of the tiny village is mapped out on the computer projections Dasheno keeps in his office. An inch or so of rain could damage or wash away the first three homes on the edge of the pueblo. A monster storm could unleash a flood that would take out the administration building where Dasheno and other tribe officials sit poring over their flood maps.

According to their computer projections, a flood of that size could also wipe out the school, a day care center for the elderly, and about 300 homes. Dasheno knows the country needs rain after a season of drought and wildfires, but it’s a direct danger to his people.

“I think of it every day. I think of it at night time. Any time we could be called or have to make the call,” Dasheno said. “My granddaughters have their backpacks packed in case they have to leave.”

It’s been a year now since the Las Conchas fire blew through the Santa Clara canyon, burning up 80 percent of the tribe’s remaining land, or about 24 square miles. At the time it was the worst fire in New Mexico‘s recorded history.

Then came the floods. Landscapes scorched by wildfire, stripped of the trees, brush, and soil that ordinarily retain moisture, turned into flash flood zones.

Federal government agencies estimate it will cost $39 million to secure the canyon and make Santa Clara pueblo safe. So far the tribe has received only about $6 million, and less than $400,000 from the main recovery agency, the Federal Emergency Management Agency (FEMA). Dasheno worries time is running out.

As an early and violent wildfire season, fuelled by drought and climate change, gives way to summer monsoons, small communities like Santa Clara, which has 2,800 enrolled tribal members, and big tourist centers like Colorado Springs, are caught in a similar crisis.

The wildfires, it turns out, were just the beginning. The greater danger may well be the floods.

This month alone Dasheno ordered two evacuations because of a flood alert from the canyon. In each case there was only an inch of rain—but it didn’t look that way from Naomi Tafoya’s house on the night of July 11. “The water was huge. It was just raging, ” she said.

Tafoya, who lives with her husband and five children, packed up the truck and put it in position for a quick getaway.

“It was pretty intense to see how much water came down You could hear boulders crashing, trees cracking as they were being thrown about,” she said. “But the smell was wonderful, everything smelled like pine.”

This time, the flood stopped about 200 feet short of the cement and sandbag wall outside Tafoya’s back door. But she’s sure there will be a next time. “There is the potential that my home could be damaged or I could lose my home because of flash floods from the canyon,” she said.

In the pueblo’s Native American tradition, the canyon was sacred land. Its steep walls, rising to 11,500 feet, were once green with pine and juniper, were believed to harbor the crucial elements of life: clean water, trout and elk for sustenance, wood for homes or ritual objects.

Nowadays it looks like the scene from a fresh disaster—trees stripped and blackened by fire, trout ponds clogged with debris and ash, cliff walls collapsing into the road, a forklift buried in a 10-foot mud slide. All that’s missing is the yellow tape.

The canyon, though seen as a spiritual home to the tribe, is off-limits to the public because of the hazards. Of the multiple threats—5,000 dead or dying trees that could topple in a high wind, rock fall, and mudslides—flooding is the most urgent, say tribal officials.

But the root cause was a wildfire that burned so hot it glazed the soil like pottery. “It’s not only the plants being killed but so much organic material is being burned up that the soils are really left bare,” said Peter Fulé, a forestry professor at Northern Arizona University. “When all of the protective gathering is gone, a raindrop is like a little missile landing on the bare soil, or soil covered only wish ash. It loosens it and frees it from the surface.”

The water carries the soil, pine needles, even tree trunks and boulders with it, a cascade of debris all heading downstream. From the village of Santa Clara, it’s as frightening as watching a biblical deluge come in, said Dasheno.

“It is like this little stream becomes the Amazon,” Dasheno said. “It comes down from the canyon with everything in it: boulders, trees, all kinds of debris.”

The community is desperate to put defenses in place as the monsoon season comes. Michael Chavarria, a former governor now overseeing work to secure the canyon, is pressed to name his top priority. He needs to cart away about 400,000 cubic yards of ash and silt—over a dirt road that is still under construction. He needs to dredge the four trout ponds and other catchment areas to prevent further fighting. He needs to shore up the canyon walls to prevent mud slides. He needs to figure out how to pay for it: It costs $100 to cut down a dead tree, another $300 to $500 to haul it away. And he needs to carry out all of this work with the knowledge that it could all be wiped out in the next big rain.

The July 11 flood washed out the road repairs his crew had been working on since May.

“It is sad and overwhelming,” Chavarria said. “It’s too much. It’s too much for the tribe to handle. We don’t have an endless pot of money.”

To the immense frustration of the tribe, however, the federal and state governments do not seem to be moving with a sense of urgency. Tribal leaders have lobbied the White House, Congress, and state officials to release funds. He’s cajoled senators to visit. He’s filed and refiled documents lost in the federal government bureaucracy. “It’s like having to pull teeth,” Dasheno said.

He’s growing frustrated with FEMA, which was supposed to lead up the recovery effort. The tribe can’t even get a hearing with the New Mexico governor, it seems. Dasheno said the tribe had issued five separate invitations to the governor, Susana Martinez, to visit the pueblo. Martinez visited on Tuesday.

Federal government officials argued that the funds are arriving on time—that the tribe was being overly impatient. They accused the tribe of failing to recognize losses caused by the Las Conchas fire in other parts of New Mexico.

Dasheno rejected those charges. “We understand the mechanism,” he said. “But no community affected by wildfire and now flood should have to wait this long.”

A spokesman for Martinez would not comment on a visit but said: “Gov. Martinez has been very engaged in securing that all state funding possible is available for flood mitigation efforts, and has worked closely with the pueblo to secure available federal funding as well.”

Those explanations were not much consolation for Chavarria, however. “We’re faced with the regeneration of our whole canyon starting from scratch,” he said. The stakes were enormous. “We Indians are an endangered species,” he said. “All we have left are these acres we can call home.”