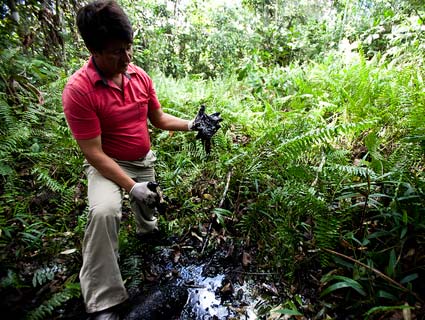 A toxic pool of crude oil in the Ecuadorian Amazon. <a href= http://www.flickr.com/photos/rainforestactionnetwork/4858687888/in/photostream/>©Caroline Bennett/Rainforest Action Network</a>/Flickr

After two decades of contentious court battles, a group of indigenous Ecuadorian communities clinched a $19 billion judgment against Chevron in 2011 for the destruction its subsidiary Texaco oversaw in the Amazon rainforest. Chevron has fought bitterly against the enforcement of the payout—one of the largest ever handed down in an environmental suit—and is attempting to build up evidence for a fraud case it’s leveling against the Ecuadorians, their legal advisor, and his associates.*

In its latest effort, Chevron has effectively sucked a whole cast of environmental activists, attorneys, and journalists into the vortex of the litigation with a series of wide-reaching subpoenas for private email data. Most of the dozens of targets of Chevron’s massive “fishing expedition” are not directly tied to the original lawsuit against the company or its current legal claims; they include the plantiff attorney’s summer intern who only worked on the case briefly in 2007, a writer who worked for a non-profit on behalf of the affected Amazon communities, and an environmental activist in Ecuador who fears that Chevron could use information about his whereabouts to intimidate or harass him or pass it along to third parties “that could do the same or worse.”

Revealing data for more than a hundred private email accounts over the span of nine years will fall into Chevron’s hands if federal courts in New York and California fail to dismiss what legal experts call “sweeping” and “invasive” subpoenas the oil giant has issued to service providers Google, Yahoo!, and Microsoft.

In briefs filed on behalf of 32 clients late last month by the digital civil liberties group Electronic Frontier Foundation (EFF) and environmental organization EarthRights International, attorneys argue that Chevron is threatening constitutional rights to free speech and free association with its “chilling” requests for sensitive information about individuals not accused of any wrongdoing in the company’s  legal claims against the plaintiffs. “They just basically drag the net through these set of activists…and just basically [say], ‘Let’s get what we can and see what it turns up,'” says Jennifer Granick, the director of civil liberties at Stanford Law School Center for Internet and Society.

“They just basically drag the net through these set of activists and just basically [say], ‘Let’s get what we can and see what it turns up,'” says the director of civil liberties at Stanford Law’s Center for Internet and Society.

In an emailed statement, Chevron spokesman Justin Higgs stressed that the information requested did not include “email content” and that the company was “only seeking user account information and IP logs.” Yet Chevron also asked service providers for identifying information like names, mailing addresses, phone numbers, billing information, and the IP addresses, log-in times, and session durations for any computer logged into the those accounts over the last nine years.

“With that information, you can create a pretty detailed map of someone’s itinerary,” says EFF staff attorney Nate Cardozo. Stanford’s Granick agrees. “There’s an idea in our law that content is very revealing and that transactional information is not,” she explains. “That may have been true in old days where transactional information basically consisted of phone numbers you dialed from your house.” But today, with deeply specific data, everything is different. “You can figure out who was with who, at what time, where were they, how late were they awake, you know, all that stuff. It’s very invasive.”

As for Chevron’s ultimate motives behind obtaining the information? Experts speculate that it’s more about intimidation and harassment of critics than materially relevant intel. Cybersecurity expert Andrew McLaughlin, President Obama’s former deputy chief technology officer, told Mother Jones in an email that the subpoenas were a “massive overreach by Chevron—an attempt to use the litigation discovery process to intimidate environmental activists, journalists, lawyers, and others who are not parties to the lawsuit, and who have done nothing more than exercise their rights to criticize and investigate a powerful corporation.”

Chevron, meanwhile, maintains that claims of intimidation are inaccurate and are an effort to “misdirect onlookers from the fraud and misconduct” of the legal team and plaintiffs who won the judgment against the corporation.

On October 23, a judge denied the motions on the procedural grounds that the parties should work to resolve the dispute before filing. Chevron, EFF, and EarthRights International will summarize their differing positions in a joint letter to the judge in early November. The matter could be decided within the coming weeks or month. If requests to dismiss the subpoenas are not granted, the case could open the legal system to a flood of other similar broad corporate subpoenas. “I think the law is clear,” Cardozo says, “that it’s important that people have the right to associate freely and speak their minds freely without fear of being identified, tracked, and harassed by the people against whom they’re speaking.”

*The Ecuadorian plaintiffs and their attorney Steven Donziger have denied Chevron’s fraud claims in a countersuit.