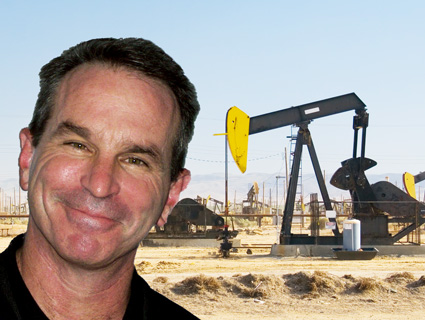 Robert Bryce has written op-eds for several major newspapers—which have failed to mention that he works for the fossil-fuel-backed Manhattan Institute. Photograph of Robert Bryce: <a href="http://commons.wikimedia.org/wiki/File:Robert_bryce_2010.jpg">Larry D Moore</a> / Wikimedia Commons; oil field: <a href="http://www.shutterstock.com/cat.mhtml?lang=en&search_source=search_form&version=llv1&anyorall=all&safesearch=1&searchterm=oil+field&search_group=&orient=&search_cat=&searchtermx=&photographer_name=&people_gender=&people_age=&people_ethnicity=&people_number=&commercial_ok=&color=&show_color_wheel=1#id=3577522&src=cc0abe8a64b75a72f8dbdad75e19d368-3-7">IRC</a> / Shutterstock

The fossil fuel industry has long been a source of talking points and “studies” aimed at spreading doubt about climate change, and over the past few years, it has broadened its scope to undermine support for clean energy, as well. Often, this criticism is published in the form of articles in major media outlets—penned by employees of think tanks who don’t disclose their groups’ industry funding, a new study finds.

The Checks and Balances Project, a pro-clean-energy watchdog group, surveyed stories published over the past five years in 60 news outlets, including national and regional newspapers, the Associated Press, and Politico. Researchers found that only 6 percent of the stories disclosed the funding when they cited “experts” from those think tanks. Typically, the stories referred to the groups as “free-market” or “libertarian,” without mentioning the dirty-energy support.

Among the most frequent op-ed contributors is Robert Bryce, a senior fellow with the Manhattan Institute, a think tank that has made promoting fossil fuels and downplaying climate change a central focus—and that has received $1.21 million in funding from the likes of ExxonMobil and Claude R. Lambe, a Koch-owned charitable organization. Bryce is quite deft at mowing down clean energy, which is probably why he’s become a regular in the op-ed pages of the New York Times and the Wall Street Journal, on TV, and speaking at events.

The Checks and Balances report notes that Manhattan Institute was mentioned 65 times in the papers it surveyed. That count includes pieces like Bryce’s April 2010 op-ed in the Washington Post, “Five Myths About Green Energy,” which includes lines like, “[I]n in the electric car’s century-long history, failure tailgates failure.” The piece describes Bryce as a senior fellow at Manhattan Institute, but doesn’t mention the funding. Nor does his Wall Street Journal piece from August 2010, “Wind Power Won’t Cool Down the Planet,” which claims that increasing the use of wind will actually increase our emissions of carbon dioxide. Bryce also popped up in a Christian Science Monitor piece on lessons from the BP oil spill, arguing that nothing can compete with oil—again, with no indication that his organization has a dog in the fight. (Media Matters also posted a piece in 2011 that noted Bryce had made 39 different media appearances that failed to disclose the fossil fuel ties.)

Fossil-fuel-funded AEI fellow Steven Hayward has penned WSJ op-eds with titles like “No: Alternatives Are Simply Too Expensive.”

Other conservative think tanks have jumped in the clean-tech-bashing game, too. Take the American Enterprise Institute, recipient of at least $2.8 million in money from fossil-fuel interests like ExxonMobil since 1998. AEI fellow Steven Hayward has penned Wall Street Journal op-eds with titles like “No: Alternatives Are Simply Too Expensive.” Then there’s the Institute for Energy Research, an industry aligned nonprofit that has taken money from Exxon and the Claude R. Lambe Charitable Foundation, one of the Koch family foundations. The institute’s president, Thomas Pyle, appeared in a January 2010 Houston Chronicle article arguing that the government should not provide tax credits to renewable energy, because it’s been proven that they are “not economically viable in the marketplace.”

In October 2011, Bryce did get some flack when an op-ed he wrote for the New York Times bashing California’s clean-energy mandate failed to disclose that the Manhattan Institute is supported by oil and gas interests. Checks and Balances, along with a group of 50 journalists and journalism educators, launched a campaign in response, asking the Times to disclose any financial ties of op-ed contributors. The public editor responded with a column calling for more transparency on contributors.

Bryce bristles at the suggestion that Manhattan’s funding might have anything to do with his positions—and indeed, he loudly confronted an advocate from the Checks and Balances Project who asked him about it after a public event earlier this year. He claimed that the percentage of funding that the Manhattan Institute receives from the fossil fuel industry is small—just 2.5 percent of the group’s budget over the past 10 years.

“I have been targeted by the left and I think by people who have a lot of interest in pushing renewables,” Bryce told Mother Jones in an interview earlier this year. “When it comes down to it, facts can’t be bought, and people who attack me on the whole question of funding, they can’t attack my numbers, they can’t attack the physics, so they attack me.”

The complaints haven’t slowed Bryce down at all; he’s continued to place op-eds bashing renewables and promoting fossil energy in prominent national outlets. Meanwhile, his criticism has expanded from seemingly reasonable concerns about the ability to bring renewables to scale to more bizarre allegations about “wind-turbine syndrome”— purported mental and physical health effects attributed to the low-frequency noise of turbines that have been widely debunked as having no scientific or epidemiological evidence to support them—and complaints about how the wind industry has a “license to kill golden eagles.”

For its part, the Checks and Balances Project says it just wants groups backed by dirty-energy money to disclose their funding when they’re cited in the press. From the report: “Overall, we think that whether it’s for a quote, background information, a citation or a byline, ‘think tank’ sources should be asked a simple, step-and-repeat question: ‘Do you get money, directly or indirectly, for interests that stand to benefit from what you are saying?'”