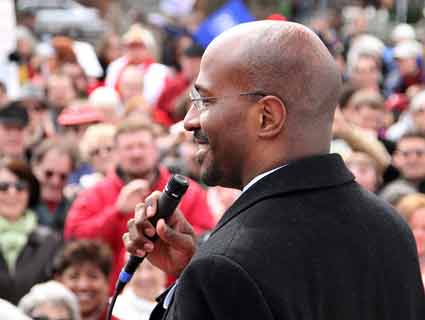 Van Jones is a leading environmental and human rights advocate, President Obama’s former “green jobs” special adviser, a CNN contributor, and the New York Times bestselling author of The Green Collar Economy and Rebuild the Dream. Chris Mooney spoke with him by phone as part of our ongoing coverage of how President Obama can tackle the climate issue—and lead—in his second term.

Mother Jones: Obama and global warming—decode his signals for us. Is he really going to take the lead here in the next four years and prioritize this issue?

Van Jones: I think it’s not clear sometimes how America is prioritizing the issue. Four years ago, both presidential candidates, McCain and Obama, ran as climate champions. The only thing that they agreed on was that global warming was real, caused by humans, could be fixed by cap and trade, and that that would lead to jobs. Four years ago, that was common ground, and the only common ground. And four years ago, people were still impacted by Al Gore’s film, An Inconvenient Truth.

Well, all of the horrible things that were shown in Al Gore’s film in 2007, you can see on the Weather Channel in 2012. And yet you don’t see people marching down the street, even in the wake of Sandy, even in the face of the drought, demanding change. So I think that’s a factor in Washington, DC, not being as vocal or as visible.

Now that said, I think that’s starting to change, and I think this president is going to have to deal both with the worsening science, and the returning public will to act. And I credit Bill McKibben and 350.org for coming on so strong since the election was over, and also the shock of Hurricane Sandy and its aftermath, for I think creating a new moment for climate solutions to take center stage.

MJ: What would real climate leadership look like? You gave President Obama a B or B- on the environment in his first term; what would he have to do to earn an A in the second one?

VJ: An A would be a major energy and climate bill as a centerpiece of his legacy. He obviously has to deal with the economy and the budget issues that the tea party keeps trying to politicize. And there’s a question of immigration reform, which is critical as a major part of the progressive coalition. But, 10 years from now, 20 years from now, the only thing people are going to be asking of this president is either, why he didn’t find the courage to do something on climate change, or they’re going to be asking how he found the courage. I think from the viewpoint of history, this is going to be the issue that he’s judged on.

MJ: What are the chief actions that you think he can take?

VJ: I’m a board member for the Natural Resources Defense Council, and we just put a piece out this week, talking about ways to use the Clean Air Act to sharply reduce carbon pollution from the existing power plants…that would make a tremendous difference.

The other thing he can do is use the power he has as the president of the United States to force a national conversation. We’ve seen a lot of conversation about this fiscal cliff, which is an invented, manufactured crisis, but very little talk about the climate cliff, which is a real, unavoidable crisis. So if we can have the president of the United States on TV every day talking about the manufactured fiscal cliff, then he can use all of those resources to put pressure on Congress to do something about the real climate cliff.

I also think that it is still the case that the best possible way to get the economy moving is to move in a greener direction. You get on an airplane, you fly coast to coast, you look down, and you see a million rooftops that don’t have solar panels on them. You fly over the plain states, acre after acre, you don’t see wind farms and solar farms, even in places that they could exist. There is just tremendous opportunity to home-grow our energy, and put people to work. You land in any city, you are driving past buildings that are leaking energy, because they aren’t using modern energy efficiency technologies. There’s tremendous opportunity there.

VJ: I think activism works. You look at the last term, the Latino community kept pushing hard on immigration, and the president came out for the DREAM Act. The lesbian, gay, bisexual, and transgender movement kept pushing on the question of marriage equality, and the president came out for marriage equality, which then had a positive effect on public opinion and helped that movement win at the ballot box and in a number of states, within months.

So I think it takes two keys to unlock the door to change: It takes public activism and action, and it takes presidential leadership. But what we’re seeing now is the return of public action and public concern. 350.org is leading that process. The aftershocks of Sandy are going to push that process forward.

Let’s not forget, we have dust bowl conditions developing in the heartland of America, the bread basket of the world, just as Al Gore predicted. That is happening right now. So as the urgency of these disasters moves public attention, and as you see activists marching again, I think there’s an obligation for the president to meet the people on this issue.