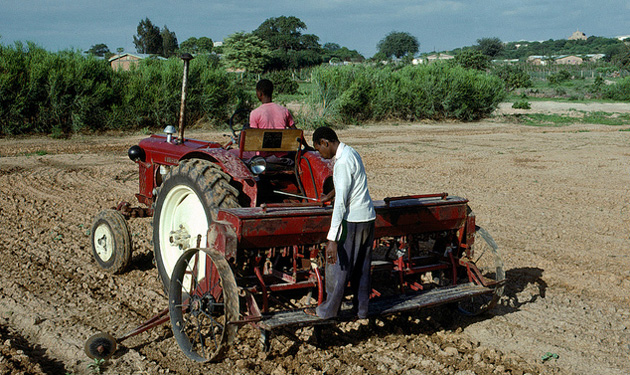 Since the 2007 food price crisis, a growing number of US investment funds have been buying up swaths of farm land around the world in anticipation of a rising demand for food and fuels to support the ever-growing global population. My colleague Tom Philpott has written about this increasingly common trend of land grabs—”grabs,” because the lion’s share of these investments seem designed to produce crops for export, pushing out small farmers in the process.

A 2010 Organisation for Economic Cooperation and Development paper estimated that about $14 billion in private capital is committed to farm land around the world, as well as related infrastructure projects like crop storage, processing plants, and transportation. That figure is likely to double or triple by 2015, according to the International Institute for Environment and Development. IIED counts 190 private equity firms currently investing in agriculture and farm land in Africa, South America, Eastern Europe, and elsewhere around the world (PDF). But publicly available details about these firms, particularly those based in the US, are few and far between. Why?

As the Oakland Institute describes it, these investment funds seem to look at farm lands the same way they would stocks, as little more than profit opportunities:

For the most part, their projections emphasize growing populations, growing demands for grains or fuel, or changing economic cycles and the need for wealthy investors to reap the benefits of declining resources. Their investment thesis relies on securing and consolidating already productive and well-watered pieces of land at the lowest cost possible, and making a profit from land appreciation and most likely land transformation/conversion. Once these lands are secured through ownership transfers, longterm leases, or local partnerships, fund managers seek to scale agricultural operations up by leveraging agricultural inputs (e.g. genetically engineered seeds, fertilizers, agricultural chemicals, machinery) and water resources. The end objective is almost always to primarily serve global markets, and not domestic ones.

Overall, the report—based on interviews with the some of the companies (the vast majority never responded to the Oakland Institute) and a review of company websites, media reports, research papers, and government documents—reveals “a secluded and highly unregulated form of investment” that seeks to gain control of private land and farms, “resell them at a superior market return…and/or generate cash from rents.”

“The issues of consumer choice (to eat or not to eat GM) is a luxury Africa can ill afford in times of inadequate food security.”

Most of the investment funds profiled in the report publicize vaguely-worded sustainability and social responsibility policies. But when the Oakland Institute asked to specify what those policies look like, the group says, many shied away from details. Some of the funds explicitly promote growing genetically modified crops. In at least a few cases, the report finds, the funds partner with food and agriculture giants like Monsanto, Cargill, and DuPont, and not exactly by coincidence. Among the investment fund managers listed in the report are former executives and traders at Monsanto and Cargill. Cargill has two of its own private investment firms. Many of the companies, the report adds, have similarly close ties with big banks such as Goldman Sachs, Credit Suisse, and Deutsche Bank.

But the report’s most troubling finding is that it’s impossible to know the true impact of these investments, whether financial, social, or environmental, because information about them is so scarce. “There remains a critical lack of understanding about how investments are implemented on the ground, and the reluctance of fund managers to disclose basic information including their environmental policy or indicators raises concerns regarding their actual practices,” the report says.

Last year, the Securities and Exchange Commission and the Commodity Futures Trading Commission introduced new requirements for financial advisers registered with the SEC to report to the Financial Stability Oversight Council, a new body created by the Dodd-Frank Act. But virtually none of that information is made available to the public, according to the Oakland Institute’s findings.

“My boss wants to create the first Exxon Mobil of the farming sector.”

What compounds this lack of transparency, the report states, is the fact that the investments funds operate through “onshore and offshore partnerships” even while based in the US, “typically located in the tax havens of Delaware and the Caribbean Islands.”

This has made it “extremely difficult for concerned citizens, students, teachers, and others to find out about agricultural funds,” the report adds. “Even asset owners often claim to not know or understand the underlying holdings of their funds.”

Here’s a more detailed look at five of the most notable investment funds in the report:

Correction: An earlier version of this post misidentified George Soros as the speaker of this quote.