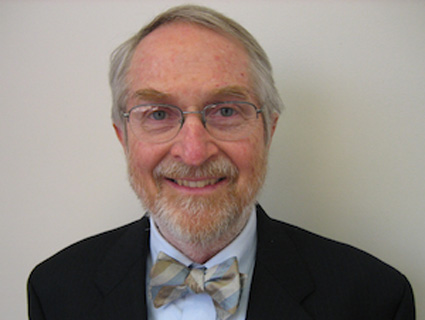 Next time you inhale, you may want to thank toxicologist Howard Mielke for your lead-free air. Mielke’s research helped phase out lead from gasoline in the 1970s—a campaign that was successful in part because he managed to sample the lead-contaminated soil in his legislators’ own backyards. But Mielke considers his work far from done. As Kevin Drum writes in his Mother Jones cover story “America’s Real Criminal Element: Lead,” remnants of the toxic metal, once disseminated by leaded gasoline into the air we breathed, still linger in the soil around us. Now in his 70s, the Tulane University professor and former Peace Corps volunteer continues to passionately campaign to clean up soil in cities.

Mother Jones: You’ve written about when your own daughter had high blood lead (PDF). Has being a parent changed how you felt about lead poisoning and the way it’s handled?

Howard Mielke: Oh, for sure! It was a totally accidental measuring of blood lead level for my daughter. She needed an operation to correct her crossed eyes, so during the preparation for all that, they were doing the bloodwork, and I said, “Well, measure the lead.” The people were resisting me. They were saying we don’t need to measure lead: You live in a nice part of St. Paul, you’re white folk. We don’t see high lead levels from children in your area. Well I said, “Measure it. Prove it.” When it got measured, it turned out it was elevated.

“They were saying: ‘You live in a nice part of St. Paul, you’re white folk. We don’t see high lead levels from children in your area.’ Well I said, ‘Measure it. Prove it.'”

I had been involved in doing lead work already, and I discovered that her childcare center in the state of Minnesota had interiors that were very well maintained, but they let the children go outside in basically a hazardous waste site because nobody had bothered about the outside. She was playing in a sandbox and around the sandbox was soil contaminated with lead from 500 to 1000 parts per million. [The current standard is 400 ppm.] I paid for the cleanup, which involved bringing in Tartan Turf, which is the material used in football stadiums. Her blood lead levels just plummeted very quickly after that.

MJ: How did you originally get interested in the problem of lead in soil?

HM: That came about when I was at the University of Maryland-Baltimore County. I was working on the geochemistry of serpertines, and I gradually shifted to looking at lead in the environment. I actually started collecting samples in my own backyard and discovered that the samples had a lot more lead than what you’d expect. In fact, they were close to what was recognized at the time—this was back in the mid-70s—would be recognized as hazardous waste if they were at an industrial site. My students collected samples from the gardens, and since it was a commuter campus, I would gain samples from all the metropolitan area. We kept track of the addresses and marked it on a map, and we started realizing the interior of the city was very highly contaminated.

Baltimore had brick buildings toward the interior of the city. The areas toward the outskirts were painted and had lead-based paint on them. When I looked at soils in the two different parts of the city, the low lead soils were the areas with painted buildings whereas the interior of the city had very high lead levels. Just from that I said, we’re missing something. That was when I started to pay attention to the amount of lead in gasoline. It proved to be a very large tonnage per year. The automobile was really a toxic substance delivery system.

HM: In the 1970s, there was an article in the journal Environmental Health Perspectives by Gary Ter Haar that stated basically paint was causing the major pollution of lead in urban soils. When we looked at Baltimore, the pattern we were finding was the opposite of what you would expect. It turns out Gary Ter Haar worked for the Ethyl Corporation [which manufactured the lead additive for gasoline]. There was a huge conflict of interest. The idea of paint being the major contributor of lead to the soil came from people who had a very long vested interest in not letting the cat of the bag.

MJ: What is it like working on a topic where most people are focused elsewhere?

HM: I’m always astounded by the inability to recognize that lead is lead. In the interior of the house, we have standards that are 40 micrograms per square foot. If you go outside and put your hand on the ground with a wipe so you can measure the amount of lead per square foot, what you end up with soil that contains 400 ppm, which is around 1500 micrograms per square foot on the surface. It’s just totally unbalanced. Using the standard we have in the US of 400 ppm, you would be poisoning the children very easily. How many minutes does it make for a child to play outside and put his hand in his mouth? We did work on hand licks. When children are outside, just one lick and it exceeds the total tolerable daily intake. Just one lick.

MJ: Why do you think it’s been so hard to draw attention to the problem of lead in soil?

HM: It’s hard because it’s such a big problem, you don’t want to recognize it. When I do some of my work, there are people who say, “I don’t want to know how much lead is in the soil.”

HM: Really. Not homeowners, not people with children, but landlords, realtors. They’d rather not know, and the laws are written that way. If you sell a house you’re supposed to have a disclosure. If you there’s lead-based paint in the house, you’re supposed to check a box. There’s another little box that says you don’t know, and you can check that.

MJ: Are there cities or programs that have tackled soil lead in interesting or innovative ways?

HM: Minneapolis did some interesting work and they did it very quietly. They just went through neighborhoods and block by block, they did what they just called a landscaping project: putting in clean sod. People didn’t object to it. They did that back in the 80s when I was working for them. HUD [the US Department of Housing and Urban Development] has changed public housing in New Orleans here, and in the process of new construction, they brought clean soil into the city.

“I keep suggesting tax gasoline. That is would be a good funding strategy, since lead in gasoline is a major reason for the contamination or our urban environment.”

You’ve seen our lead map, right? We’re trying to change that map and we’re making some progress. The problem is public properties are getting fixed little by little, but private properties are not getting fixed and that’s where the highest lead levels are. My work is towards private properties. I’m working with church groups and childcare centers. The trouble is I just don’t have enough money. Until we get funds, I keep suggesting tax gasoline. That is would be a good funding strategy, since lead in gasoline is a major reason for the contamination or our urban environment.

MJ: Does it drive you crazy that the return on investment is so high, yet no one is doing it?

HM: Yes, but I don’t want things to drive me crazy, I want to do something. I want to be an active participant changing the world so it’s a better world for our children. Now I’m a grandpa, so I’m paying attention to my children’s children.

Howard Mielke is currently raising money to clean up children’s play areas around New Orleans. You can donate to his Indiegogo campaign here.