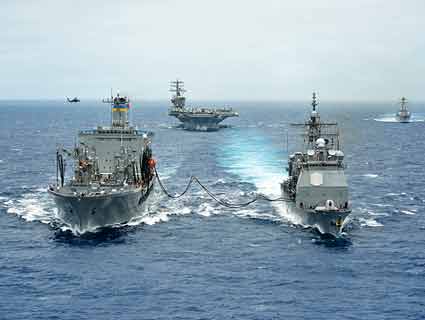 Yesterday’s Climate Desk Live briefing—titled “How the US Navy Is Leading the Charge on Clean Energy and Climate Change”—told a different kind of environmental story from the one we’re used to hearing. It was an “optimistic story,” as panelist Julia Whitty, Mother Jones’ environmental correspondent, put it—of a powerful institution, the Navy, adapting to the demands of a changing energy future simply because it’s pragmatic, and because it makes sense.

The full video is below, but here are a few highlights:

“Intestinal fortitude” and pubs on Navy ships: One perk of Julia Whitty’s aircraft carrier-based reporting experience (which she chronicles in the current cover story in Mother Jones) was a Navy issued “Nimitz Tailhook Certificate,” which commended her for:

NAFOD (No Apparent Fear of Death) and intestinal fortitude in examining the entire spectrum of air approach parameters while successfully completing an arrested landing aboard USS NIMITZ with less than mortal injury.

“I have a short list of what I’d save from my house if it was on fire, and I think this is one of those,” said Whitty of the certificate.

Whitty also discussed why the Royal Australian Navy has pubs on its ships, but the American one does not. Oh, and a few serious things—such as the importance of the US Navy’s ongoing clean-energy transition. “The Navy is tackling problems that freeze Congress solid,” writes Whitty in her Mother Jones piece. “What it learns, what it implements, and how it adapts and innovates will drive market changes that could alter the course of the world.”

Watch Whitty discuss her reporting on the Navy here:

“[We] treated oil almost like air…” Next we heard from Capt. James Goudreau, director of the Navy’s Energy Coordination Office. Right now, Goudreau explained, the Navy spends $4-$5 billion per year on the roughly 1.3 billion gallons of fuel it needs for operations. But fuel price swings can raise that cost by as much as $1 billion in any given year—forcing the Navy to cut back, sometimes very significantly, in critical areas. Inevitably, Goudreau explained, that has changed attitudes. “We have, for the last six to seven decades, treated oil almost like air as a Navy,” he said. But now, he continued, “we need to change how we consume. We need to change how we think about this.”

“The battlespace in which we operate…is going to change.” Goudreau was followed by retired Rear Adm. David Titley, who had served as director of the Navy’s Task Force Climate Change.

“If I was talking to a bunch of military guys and gals, I would say that climate change is really nothing more than the battle space in which we operate…is going to change,” Titley explained. “And if you don’t address and anticipate and account for that change, you will be at a disadvantage.”

The CIA looks into wild weather: Dr. D. James Baker, the former administrator of the National Oceanic and Atmospheric Administration and currently head of the Global Carbon Measurement Program of the William J. Clinton Foundation, discussed a Harvard report that he had just coauthored—funded by the Central Intelligence Agency—about how climate-enhanced weather extremes may worsen instability in already unstable regions of the world—like, for instance, the 2010 Pakistan floods.

Clearly, the Navy isn’t the only part of the US government interested in climate and energy readiness—understandably so.

Here’s the full video of the event: