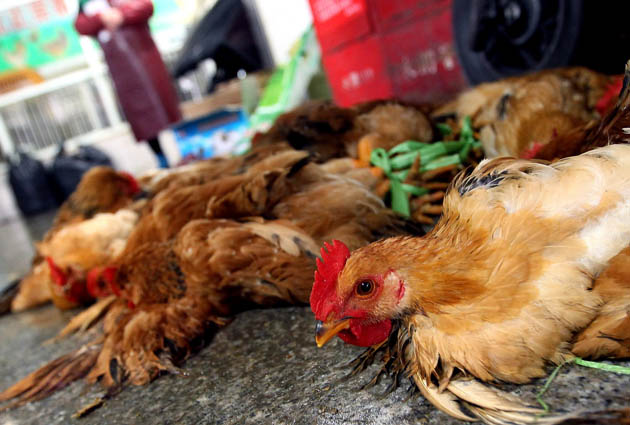 Chickens tied up for slaughter at a market in Shanghai, April 5th. The city is mass-slaughtering poultry after bird flu was found in pigeons there.Chen Fei/ZUMA Press

Just as dead pigs and ducks stopped washing up in rivers in China, another public health threat crops up: Chinese media announced that a strain of bird flu never before seen in humans was found in Shanghai and surrounding provinces, infecting 24 111 people so far in China and killing 7 20 of them.

For the most part, flu outbreaks like this pop up then fade within weeks. But every once in a while, they become pandemics, spreading across the world and infecting people with a deadly flu. What will happen with H7N9 is unclear, but there are a few things worth knowing about its mysterious origins, and how people in China are reacting.

Where did it come from? Unclear. The first two victims died in late February, but the Chinese state media didn’t announce the deaths or that they had detected the new virus until March 31. So far, it looks like all the victims contracted the flu directly from a sick bird, not another person. That’s an important distinction because a flu that humans contract from each other can spread much faster than a flu that people contract directly from animals. (A Chinese blogger has put together a map of the cases.)

The Chinese government has traced some cases back to live pigeons that were being sold in a market in Shanghai. On April 4, Chinese state media confirmed that it had found cases of bird flu in those pigeons, and last Thursday night the government began a mass slaughter of poultry there.

More generally, flu strains circulate among birds all the time, and this one just happened to be one of the lucky few to figure out how to spread to humans. Virology expert Ron Fouchier says there’s a “very remote” chance of any one strain spreading from birds to humans in the first place.

How is it different from previous bird flus? It’s just a different strain. The most famous in recent memory was H5N1, which was first spotted in Hong Kong in 1997 but didn’t quite rear its ugly head until 2005. It’s still out there being passed between birds and evolving as a flu strain. There have been fewer H5N1 cases in recent years, but it’s still deadly: 50 people, mostly in Egypt and Cambodia, contracted it in 2011, and 26 died.

Is this the next flu pandemic? Maybe. When a new strain of flu makes it from animals to humans and manages to keep spreading to people or between them, it’s a pandemic. There have been four in the last century, in 1918, 1957, 1968, and swine flu in 2009.

Fouchier and his colleagues were able to create a strain of H5N1 bird flu in a lab in 2011 that was airborne among ferrets, the animals whose flu response is closest to humans’. The current strain of bird flu in China has genetic mutations that are similar to the mutations Fouchier and his colleagues made to make bird flu to airborne among ferrets, leading to speculation that this virus could eventually adapt in the same way.

How did the news spread in China? In Jiangsu province, bird flu was first reported when a hospital staff member leaked a patient’s diagnosis on Weibo, the popular Chinese social networking site. The Chinese government quickly deleted the post, but the next day, a state-run newswire ran an article announcing four new cases of the bird flu in that province.

According to Tea Leaf Nation, a site that monitors Chinese social media, skepticism and doubt about the government’s handling of H7N9 on Weibo is running high. A recent viral Weibo post of a company email—allegedly from the CEO of a large Chinese e-commerce company—urged employees to take their meetings by phone and cancel all nonurgent business trips.

What are the symptoms? It feels like a bad case of the flu: fever, respiratory problems that may eventually lead to pneumonia. (See MoJo‘s flu explainer for facts about the regular flu.)

Do I have it? Should I be wearing a mask? No cases have been detected in the United States, so probably no on both counts. So far, H7N9 has mortality rate of roughly roughly 60 percent, but since there haven’t been that many documented cases of it yet, the fatality rate could actually be much lower. Viruses with high mortality rates sometimes have a harder time sticking around because they constantly need to find new hosts.

Then why is this such a big deal? Usually, when there’s a bird flu outbreak, scientists see sick birds before sick humans. This strain of flu doesn’t appear to cause symptoms in poultry, which makes it hard to trace and difficult to predict. When the 1997 bird flu hit, on the other hand, it killed nearly 100 percent of flu-infected chickens.

Another thing worth noting is that the H7 strain of flu hasn’t been identified in humans before, according to Osterholm. That means that we have no residual protection or immunity to the disease, which matters for two reasons: It means this flu could make us sicker, and that the vaccine will probably need more antigen in each dose to be effective. If we need more antigen—Osterholm guesses we’ll need three or four times as much—for each vaccine, that’s fewer vaccines to go around.

Is the US prepared for a bird flu pandemic? As of Friday, the US Centers for Disease Control and Prevention had issued an advisory to doctors asking them to help identify any bird-flu-like cases. The CDC has also started working on making a “seed strain,” which is essentially a prototype vaccine that can be copied by pharmaceutical companies to produce a vaccine.

Still, vaccines aren’t perfect Osterholm emphasizes that avian flu vaccines aren’t 100 percent effective: “It would take months to do it,” he said, and there wouldn’t be enough of the vaccine to be distributed worldwide, at least not at first. So far there haven’t been any reports of people hoarding Tamiflu, the antiviral medicine people whose demand soared as fears rose around the avian flu outbreak in 2005.

Is this related to the dead pigs and ducks that have been washing up in Chinese rivers? Currently, there’s no evidence of that.

What next? Osterholm sees several ways this could play out in the coming days: The number of human cases of H7N9 could dwindle, and we could forget all about it. That could mean it’s gone, or it might just be “smoldering”—showing up in animals and people every once in a while, and possibly evolving into a pandemic someday (or not). On the other hand, the virus could evolve to spread from person to person, unleashing the flu in a matter of weeks. At this point, there’s no way of knowing for sure.