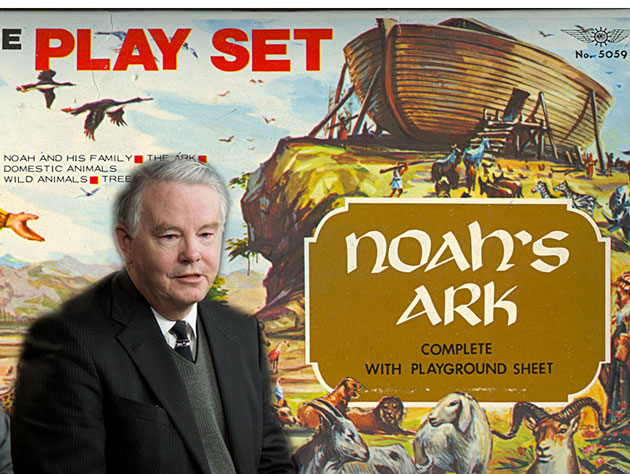 Texas Republican Joe Barton stands out even among his fellow conservative Republicans who have made it an article of faith to deny the existence of a human component to climate change.

On Wednesday, Barton cemented that reputation by citing the Old Testament to refute scientific evidence of man-made global warming, drawing on the story of Noah’s ark.

“I would point out that if you are a believer in the Bible, one would have to say the great flood was an example of climate change,” Barton told a congressional hearing on Wednesday in a video first shown on the BuzzFeed website. “That certainly wasn’t because mankind had overdeveloped hydrocarbon energy.”

Barton was speaking at a House subcommittee hearing called by the Republican leadership to promote a bill that would allow Congress to fast-track a controversial pipeline that would pump crude from the tar sands of Alberta to refineries on the Texas coast.

The Texas congressman began by reiterating his support for the Keystone XL pipeline. He went on to say that he did not dispute the existence of climate change—just any connection to human activity, such as the greenhouse gas emissions produced by the burning of fossil fuels.

“I would point out that people like me who support hydrocarbon development don’t deny that climate is changing,” he said. “I think you can have an honest difference of opinion of what’s causing that change without automatically being either all in, that’s all because of mankind, or it’s all just natural. I think there’s a divergence of evidence.”

Barton has made a reputation for his outspoken rejection of man-made climate change, and for his support for the oil industry.

In 2010, in the wake of the BP Deepwater Horizon disaster in the Gulf of Mexico, Barton became an object of ridicule for offering a profuse apology to the oil company

Barton told then-BP-chairman Tony Hayward he was ashamed that the White House had reached a deal requiring the company to set aside $20 billion for cleanup and restoration costs. “I think it is a tragedy of the first proportion that a private corporation can be subjected to what I would characterize as a shakedown, in this case, a $20 billion shakedown,” Barton said at the time. “I apologize. I do not want to live in a country where any citizen or corporation that does something that is legitimately wrong is subject to some sort of political pressure that, again in my words, amounts to a shakedown. So I apologize.”