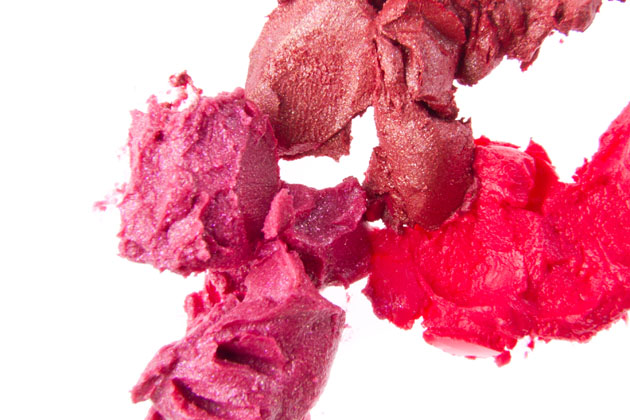 Many women say lipstick makes them feel beautiful and confident. But could it also be making them sick?

In a small study out last week, researchers asked a group of teenage girls to hand over their lipsticks and glosses and tested them for toxic metals, including lead and cadmium. Though metal content varied widely from brand to brand, they found that women who apply lipstick two to three times daily can ingest a significant amount—20 percent of the daily amount that’s considered safe in drinking water or more—of aluminum, cadmium, chromium, and manganese. Depending on the lipstick, in some cases women who slathered it on (14 times a day or more) were meeting or surpassing the daily recommended exposure to chromium, aluminum, and manganese. Lead, a metal that humans should avoid exposure to entirely, was detected in 75 percent of the samples.

Some of these chemicals are nasty: Cadmium, for example, is a carcinogen that has been found in breast cancer biopsies and shown to cause cancer cells to multiply in lab experiments. Metals are often used in mineral dyes, which give lipstick its pigment, and are also often found in soil and groundwater. “Cadmium is a very common contaminant in soil,” says Sharima Rasanayagam, a scientist at the Breast Cancer Fund. “What’s concerning is that consumers don’t know they’re in the lipstick.”

Sonya Lunder, a scientist at the Environmental Working Group, sees it as a two-part issue. “The first question is, can these products be safely used by everyone? And the second is, if they’re just a contributor to this overall concern about metals and metal exposure, then what’s best? How low can those levels go?” Lunder and others suggest that better disclosure, either from companies themselves or the government, would help consumers understand and limit their daily exposure.

Elevated lead levels in adults can lead to a host of health problems from miscarriages to seizures. Lead exposure among children can lead to permanent brain damage and, and as Kevin Drum investigated in Mother Jones‘ January/February issue, possibly even crime.

Lipsticks with traces of lead included one made by Burt’s Bees, which is now owned by Clorox.

Studies have been finding lead in lipstick for years. The first major examination was in 2007 when the nonprofit Campaign for Safe Cosmetics tested a range of products and found lead in 61 percent of them, including Burt’s Bees tinted chapstick. Burt’s, which is owned by Clorox, trades on selling “truly natural products that have a positive effect on both you and the world you live in.” (Burt’s has a statement on its website from the 2007 study that says, “We are meeting directly with our suppliers to find ways to identify, minimize and even eliminate trace elements of lead from our natural mineral sources.” The company didn’t respond to Mother Jones‘s request for more information about what they had done to eliminate the lead since the 2007 study came out.)

The FDA has conducted two follow-up studies, one in 2009 and one in 2012. Both studies found much more lead, up to 7.19 parts per million, in the lipstick samples tested. Here are the top 20 lead-containing lipsticks from the FDA’s 2012 review of 400 lipstick shades: 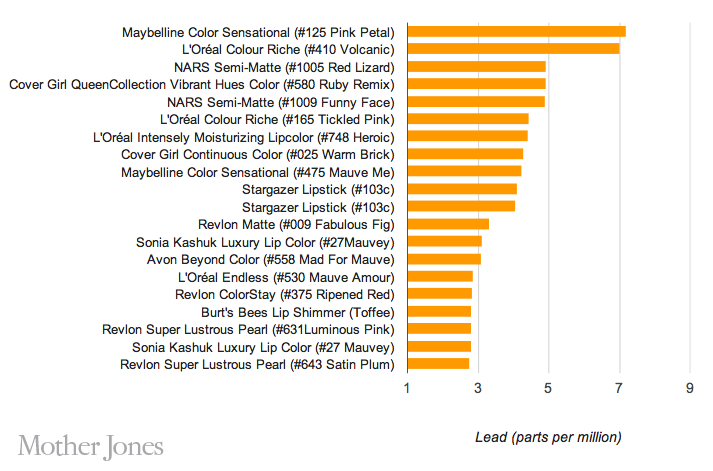 So shouldn’t the FDA do a better job curbing lead and metal content in lipstick? In short, yes. Though the agency regulates how much of these substances can be in pigment, strangely, it hasn’t specified how much metal overall is allowed in the tube of lipstick. And the FDA itself doesn’t even test the dozens of dyes used in cosmetics or set the maximum amounts of metals in them; it outsourced that job years ago to the Cosmetic Ingredient Review, an organization established in 1976 by a cosmetics-industry-aligned trade and lobbying group. Over the years, the US has banned 22 chemicals outright. For comparison, the EU currently bans more than 1,300 chemicals.

Want to limit your heavy metal intake without giving up your lipstick? The FDA’s 2012 test found less than one part per million of lead in Wet n’ Wild, Bobbi Brown, and Shiseido brand lipsticks. The Environmental Working Group also has a database with information on cosmetic products and the risky ingredients that could be in them, and the Campaign for Safe Cosmetics has a list of its favorite products online as well.