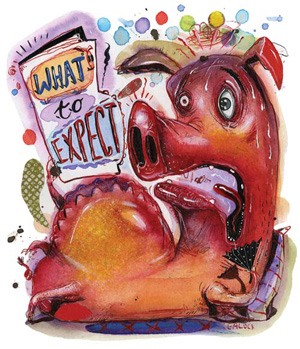 Like a lot of food-obsessed people, I love pork. The chef David Chang, whose Manhattan restaurant Momofuku is practically a porcine temple, once declared the pig a “mystical, magical animal.” In addition to being delicious, pigs are profoundly smart and social creatures that can even be taught to play simple video games with their snouts. (The jury’s out on whether doing so lowers their IQs.)

Yet despite pigs’ many lovable qualities, of all the billions of beasts confined in our meat factories, the most miserable may be the 5.9 million sows that churn out the piglets that grow into chops, bacon, and ham.

Throughout their four-month pregnancies, many of these sows live in cages just large enough to contain their bodies. As the sows grow bigger, the tight confinement means they can lie face down but can’t flop over onto their sides. The floors under these “gestation crates” are slotted so that urine and feces can slip through into vast cesspits. Immobilized above their own waste, the sows are exposed to high levels of ammonia, which causes respiratory problems. Just before they deliver, they’re moved to farrowing crates, in which they have just enough space to nurse.

Once the piglets are weaned, it’s back to the gestation crate for the breeding sow, which averages two and a half pregnancies per year. After three or four years, the sow is slaughtered for meat.

While there’s some justification for farrowing crates—they prevent the sows from squashing their babies—the gestation stalls are mostly about cost-cutting: They allow producers to cram together as many working sows as possible. Not surprisingly, living most of its life in the functional equivalent of a coach airline seat—to use animal-welfare expert Temple Grandin’s comparison—is horrific. In 2010, when Humane Society investigators infiltrated a Virginia farrowing operation owned by Smithfield, the globe’s largest hog producer and pork packer, they found sows with “open pressure sores and other ulcers and wounds that developed from their unmitigated confinement and their inability to change positions in the crate.” At one point, an undercover HSUS investigator alerted a boss to a “basketball-sized abscess” on the neck of one sow. (Ted Genoways writes about agribiz efforts to ban undercover filming in factory farms in “Gagged by Big Ag.”) The manager first advised ignoring the growth—and then simply sliced it open with an “unsterilized razor.” In Smithfield cages—which hold about a seventh of the breeding sows in the United States—the HSUS documented sows repeatedly biting the bars of their cage, sometimes until “blood from their mouths coated the fronts of their crates.” The company fired three employees as a result of the HSUS’s findings.

Stung by video exposés, giant pork buyers including McDonald’s, Burger King, Wendy’s, Subway, and Jack in the Box have encouraged their suppliers to phase out the crates. After much squealing, industry giants like Smithfield, Cargill, and Hormel have all pledged to do so over the next five years. Already, Cargill has phased out crates in half of its sow facilities.

But while these moves are welcome, Smithfield, Cargill, and Hormel keep less than 20 percent of all the working sows. The rest of the $97 billion pork industry—including contractors that supply meat to the big three—has refused to get on board.

Richard Berman, a notorious PR flack who recently helped Smithfield bust its unions, has taken to the pages of the industry trade publication PorkNetwork to urge producers to cling to their gestation crates, which he prefers to call “maternity pens.” His advice: Ignore the issue. If the industry holds steady, he wrote, “it will prevail.”

Whether it should stick to its guns is another question. Research has shown that keeping sows in group housing, with room to stretch out, is economically feasible. Nine US states have banned crates, as has the European Union, and a 2008 Michigan State University poll found that 69 percent of respondents nationwide favor doing so. Then there’s the tide of warnings in the trade press; one editorial in Western Producer noted, “You’d have to have rocks in your head to build a new sow barn with gestating sow stalls.” Paul Shapiro, who directs the Humane Society’s farm animal protection efforts, reminded me that more than a decade ago, the egg industry fought an effort to ban forced molting—the practice of periodically starving hens to speed up laying. After consumers pressured big egg buyers like McDonald’s and Wendy’s, the industry eventually was forced to end the practice. If consumers make as big of a stink about gestation crates, I think we can win this one, too. If we don’t, it might force many of us to forswear pork—and I, for one, would really miss it.